Taking My Time While I Have It 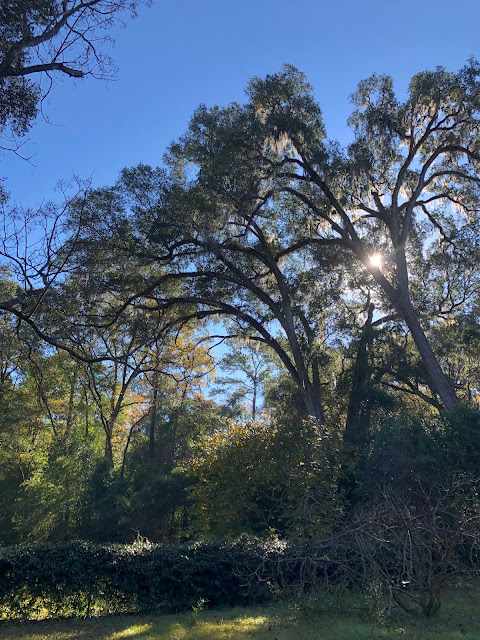 Another perfectly beautiful day here in North Florida, a little warmer but nowhere near hot. Mr. Moon kissed me good-bye around seven and I went back to sleep for awhile, Jack keeping watch by my feet. I lazed around after I got up, drinking coffee and catching up on news and doing the crossword.

I do not want to discuss what's going on with the Supreme Court and Roe v. Wade.
I do not. I probably will eventually but now is not the time.

Aside from that, all has been well today. Surprisingly, I have felt much better. Whereas yesterday my skin and joints all hurt and ached, I have not been much bothered by any of that today. I have an occasional cough that tells me that something is still going on but it's really not bad. In fact, I got a lot done today, slowly, and happily.
Last night I noticed that my shower floor was really overdue for some bleaching and scrubbing. So I did my tile-cleaning trick and coated it all with Clorox toilet cleaner which somehow seems so wrong but it works nicely and it's a thick gel so it stays where you put it for the most part. I let that sit for a few hours and then I scrubbed it with an old broom, rinsed it off and I won't say it's spotless because it isn't but it's better.
Now. Speaking of brooms. I am almost ashamed to admit this but after a lifetime of being a staunch advocate of traditional wood-handled and broomstraw brooms, the heavier the better, I have quietly and happily relinquished them all to an O-Cedar Power Corner angle broom.
Not only is it lightweight but it just does a better job.
It is certainly a less environmentally friendly product and for that I feel somewhat guilty. But I'm using it and I love it and that's that.

I finally got the kitchen and the bathroom off of it swept and mopped. Twice for each of those. One mopping would have done nothing but spread the dirt around. It was a sin. And I still wouldn't eat off of it (who eats off a kitchen floor?) but it's a lot better. It felt good to toss out the last of Thanksgiving's feast-making and foot-traffic with the mop water. And of course now my kitchen smells like Fabuloso and white vinegar which is next to godly in a way, representing cleanliness as they do. I watered my porch plants and I washed some of the throw rugs.

It all feels good although of course I haven't even begun to touch all of the true housecleaning that needs to go on here but I've honored the old house a little bit and I think I will enjoy my time alone even more having attended to it even in this small way.

I was thinking today about the only time, I suppose, I lived alone. I was nineteen, twenty? I had moved to Tallahassee and was living in an old house near FSU (long since torn down) with my dear, darling friend Paula and a precious guy named Bruce and then they graduated and were moving so I had to find a new place to live.
I had started a relationship with the guy who was to become my first husband but he lived over two hundred miles away and I generally only saw him on the occasional weekend when one of us would make the trip and so there it was- the prospect and opportunity of living on my own.
I was scared and excited, both.
I found an apartment next door to my friends, the Whartons, in an old, old house that had been turned into three separate apartments. It was spit-close to the railroad track (although probably not quite as close as I am now) and it was shaded and enshrouded with pecan trees and old oaks, moss hanging off them like Rip Van Winkle's beard. There was a huge front porch that I shared with my apartment-next-door neighbor, a very odd woman that I still think of frequently. It would take a tome to describe her and her eccentricities, her strange and weird ways. But she was fine as a neighbor except for the times when I'd wake up to find her in my kitchen, which was about two feet from where my bed was, drinking my coffee.
Well. Those were hippie days and we had our hippie ways.
The apartment was a true shotgun arrangement with the living room, kitchen, bedroom, and bathroom all in a line from front to back. No hallways, just doorways.
A flautist lived upstairs with her beautiful and very good boyfriend, a man named Tommy who played the trumpet. Lisa was flamboyant and brash in the manner of Janis Joplin, Tommy was soft-spoken and sweet. Their cat used to jump through my bathroom window and shit in my shower.
One time I found a snake curled up on my stove. My landlord had no problem walking in my front door whenever he felt like it. I don't remember any closets. And yet, I look back on that time, that place with such fondness. It's like looking back on a dream with edges blurred. I can remember lying in my bed, looking out the windows at the sky through the oak and pecan trees, wondering where I would be going from there. To what? And with whom? I was so desperate for love but now, in retrospect, in hindsight, I realize that my best moments there were the ones when I was single, alone on my own for the very first, and mostly last, time.

My then-boyfriend eventually moved to Tallahassee and moved in with me and began playing in a band with Bill Wharton. We are all still friends. That old house with three apartments burned down and a different apartment house is there now. A brick one, I believe. It's still set under the trees, still right next to the railroad track. When I drive past it, I can feel a shiver, a sliver of a ghost of the me who was still so unformed, so young and so malleable.

Well. There you go. But just as then, I still live in a very old house with a very nice front porch. I am still surrounded and sheltered by oaks and pecans, and when a train goes by my house shakes, just as that one did. I never wake up to find anyone sitting in my kitchen drinking coffee and I do have love and a whole tribe of my own. I am so much older now and I'd like to think wiser but who knows?
Not me.
Here are a few pictures. 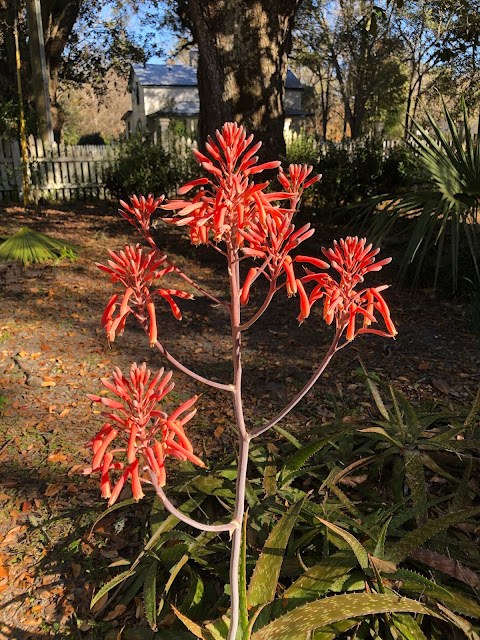 One of my aloes is blooming. 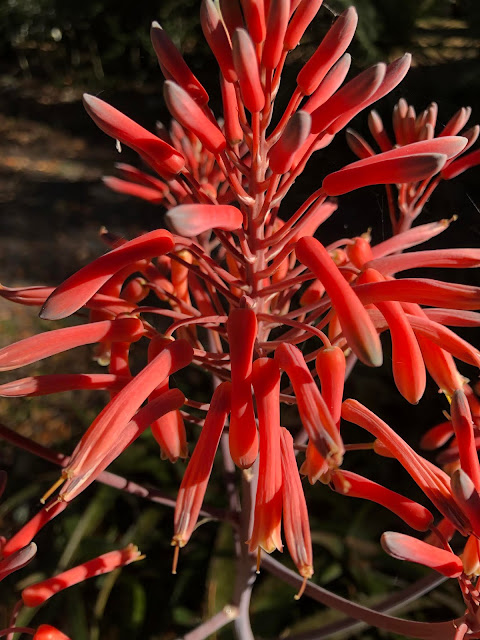 Isn't she a glory? 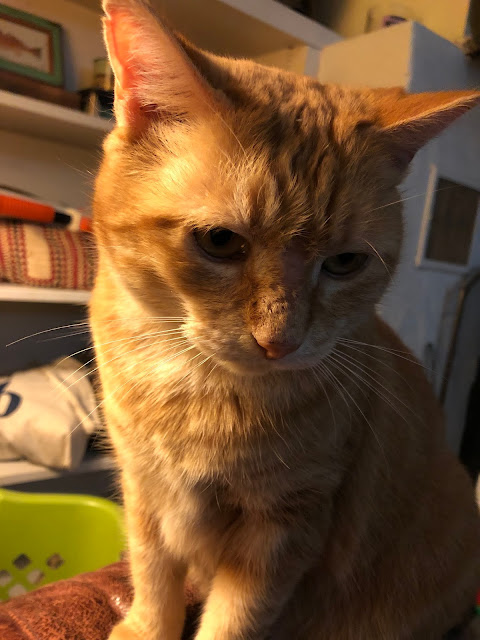 This little girl is very worried about her daddy human being gone. I tried to tell her that he'll be coming back but she meowed piteously through my attempt to reassure her as if to say that words are meaningless and she is not happy. His lap and his chair are where she loves to be, safe and protected.
I understand.
But we'll be okay on our own for a few days. I promised her that. I wish she could believe me.
Love...Ms. Moon
Posted by Ms. Moon at 6:48 PM