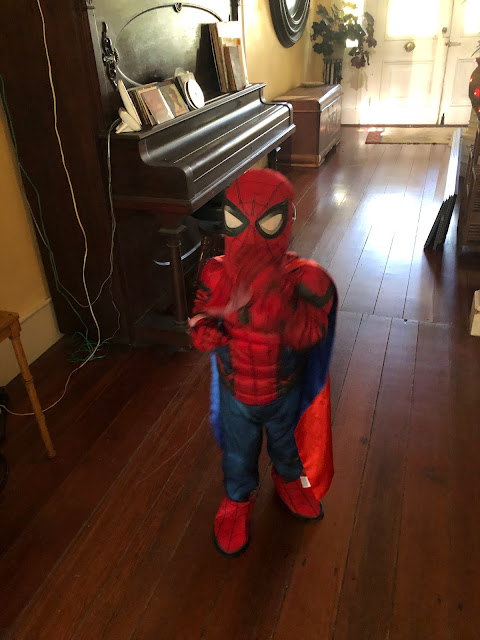 I couldn't find Levon for awhile today but Spider Man told me he'd help me find him.

I tell you what- it's been a full day. A boy got up this morning way before it was light and came and stood by the bed and I said, "Come on, crawl in," and we cuddled for awhile and I thought for sure I was snuggling with Levon until suddenly, another boy crept under the covers and I was snuggling two boys and then I realized when one of them started talking that the one I'd thought was Levon was August and vice versa.
I just laughed.
They insisted it was getting up time although it looked like the dead of night to me. It was, however, 6:18 a.m. so I guess they were right if one gets up at such an ungodly hour. We chittered away for a few minutes and I kept telling them to whisper because we didn't want to wake up Boppy and they said, "Why?"
"He needs his sleep," I said.
They did not seem to agree.
After awhile Boppy made it known that he was awake too and at first he sounded all grumpy but then he laughed at something they said and he told them to come on and let Mer get some more sleep. And off they went to watch TV and let Boppy get more sleep in his chair.
When I got up I made pancakes and they were happy about that 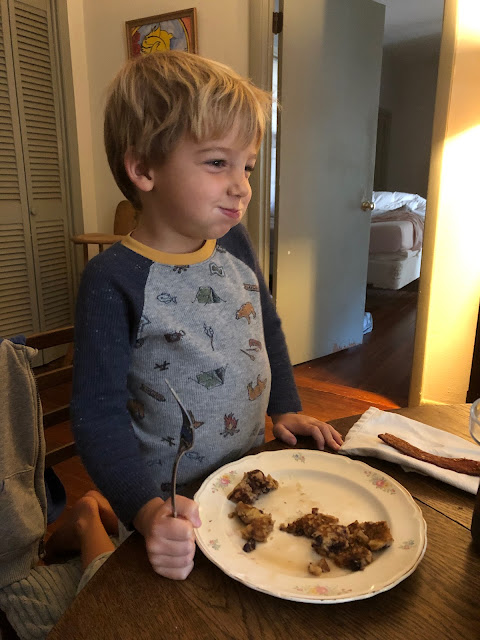 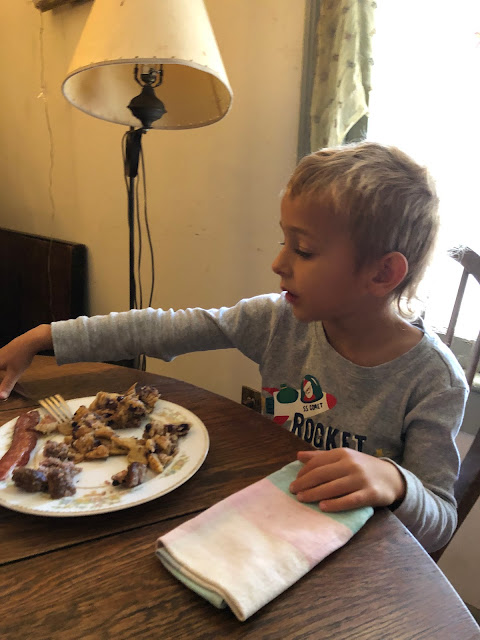 and then it was time to read a book and then the folks from the place where we'd bought our new bed called and were on their way to deliver it and so Boppy had to go dismantle the old bed and it was complete chaos. He was determined to take the old bed upstairs and that did happen and it did take a long time.

While all of that was going on, the young lads were being a little wild and doing gymnastics and demanding to play Uno and all sorts of things and I realized that one of the greatest things about not having little kids around is that you can actually do one thing at a time. Levon was trying to get me to untie the most bizarre and complicated arrangement of knots in some shoestrings that he'd tied to the tricycle and to the baby carriage and August wanted me to do something for him and I'd been trying to get them out of their pajamas and into their clothes and it was complex.
I did not get the knot untied.

The delivery guys showed up and Mr. Moon offered them fine tips to help him get the old bed upstairs and re-set up and that required a lot of work and then they brought in the new bed and for some reason, a frame was not ordered and so, well, there is no frame. The bed is still pretty high without it and we may just have to sleep on it as is for awhile because we hear that frames are hard to get these days.
Sigh.

On top of all of this, the freezer absolutely did give up the ghost and so I had to lug all of the stuff in it out to the freezers in the garage. Now, unlike most people's garages which are within arm's reach of their houses, our garage is about five hundred yards away on the rear of the property. I don't know if it's five hundred yards. I can't judge things like distance. (Spatial inadequacy.) But at least we do have freezer space out there.
Jessie came and picked up the boys and the bed project continued until it was as done as it could get without a bed frame and Mr. Moon said, "Well, we can go lay on it."
Which we did.
It is a very comfortable bed.
It felt a little strange and a little familiar to be back in our old room which is much smaller than the room we've been sleeping in. But everything I do in the bedroom, pretty much, is done on or in the bed so who needs a lot of extra space? We never moved our clothes out of the closets or Mr. Moon's dresser from the original room, whereas my dresser is in my bathroom (it's a large bathroom) so whatever, right? However, if we sleep in the same positions that we did when that was our bedroom, we'll be on different sides of the bed than we've been sleeping on for the past few years and you know how disconcerting that can be. We discussed switching sides but that just feels really wrong.
Oh, how odd and silly to be human!
We laid on the bed together for awhile, no sheets or pillows, and we both agreed that we could fall asleep so easily. It had been a busy day already and it was barely afternoon.
But we got up and I did laundry galore and walked out to the garage to get some ground venison to make chili with, stopped by the garden to pick some peppers, and then to the henhouse to collect eggs. I worked on Maggie's nightie which is almost finished. I need to do a little measuring of her and she and her brothers will be here tomorrow for a few hours so I can do it then.

At some point we determined that the refrigerator was dying too which was truly depressing. I mean- it's one thing to walk all the way to the garage to get something out of the freezer and it's a completely different thing to have to go out there every time I need a refrigerated item. Of course the good news is that this would almost definitely ensure some weight loss. A little while ago, though, Mr. Moon decided to check out the back of the refrigerator which he discovered had dust clogging up some vents (it has closed coils so that's not the problem) and he dusted and vacuumed that whole area and now we're waiting to see if ANOTHER CHRISTMAS MIRACLE WILL OCCUR and that will fix it.
I have my doubts. But a girl can hope, right? Because damn. We can't get a repair person until the 28th.
Oh, the horrors and agonies of first world problems. Poor lady has to walk out to the garage to get the butter. Poor lady and her husband have to sleep a little closer to the floor for awhile.
We shall survive.

I think I'll go put some sheets on that new bed. The chili is simmering, the birds are singing their little night tweet songs, the chickens, from what I can hear, have settled themselves into the roost.
Tomorrow I'll have my other three grands over for awhile and it will be chaos again and then I'll finish up Maggie's nightgown and wrap the presents.

The crazy thing is that I am still feeling cheerful and fairly undaunted. Everyone is healthy and good things are happening in my family despite the things that aren't so good. These too, will resolve and pass.
I just knocked wood. 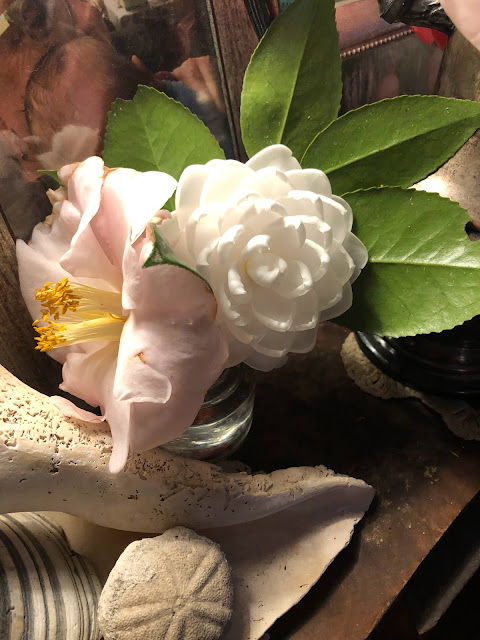 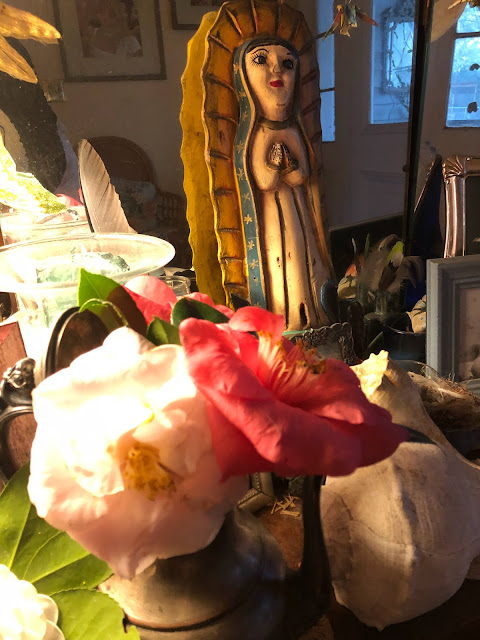 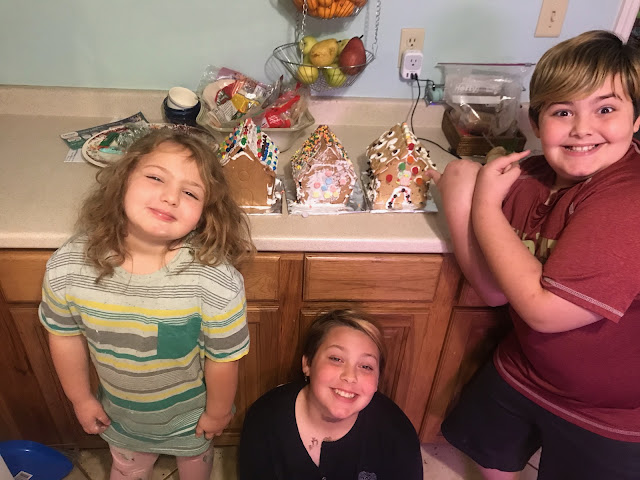 Gingerbread houses!
And as Lily said, "Some more carefully made than others." But they are all beautiful. And quite impressive!