A Tiny Trip Out Into The World 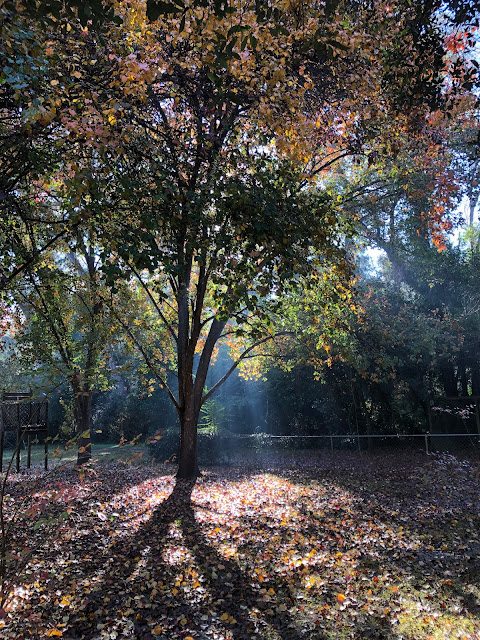 I took that photo this morning when I went to let the chickens out of the coop. The light was filtering through the air so beautifully that I had to at least try to catch it and I'm not displeased with how it came out.

It's been a good day but I am filled with a certain sense of melancholy here at the end of it. I very much enjoyed my lunch with Liz, and Jessie got to come and join us. Both Jessie and my daughter May have lived with Liz at different points in their lives. She is beloved by all of my children. She was even with me when I had Jessie. There is no one like her. She's been all over the place in the last year. Her mother is from England- was a war bride- and Liz took her over last summer and helped her in her garden and her cottage. Before that, she'd nursed and tended her after a broken hip. As she was relating adventures with Mom Care, I turned to Jessie and said, "Are you taking notes?"
Ooh boy.
The Tom Kha Gai soup was absolutely delicious and I drank every molecule of it. I also got a salad and it was good too but nothing compared to the soup. I have got to start making my own. I should start growing lemongrass again which I did in the yard of the last house we lived in before this one. The only problem with it was that it got huge! It became far more of a dramatic ornamental plant than an herb. But it was growing in direct sun which it definitely would not be here in Lloyd.

After lunch I went to Publix and then stopped into Costco briefly where I couldn't find the things I wanted and didn't feel like wandering the aisles aimlessly so I took my grape tomatoes and checked out and left and drove home. I was tired by that time. And, as I said, a bit melancholy. I think perhaps that I am becoming a little too used to being alone which is not really good for me. I noticed at lunch and while shopping that I was doing some dissociation and had to work hard to keep my mind in my head and connecting with what was being said and was going on. I think I was a little quiet. Maybe not. And it's ridiculous to be that stressed out, eating lunch with one of my oldest friends and with my daughter. It's a strange thing, a strange experience. The more I silently advise myself to "be normal," "pay attention," the more I think about the fact that I am not being normal or paying enough attention. Which only makes things worse and I begin to feel like an alien in human skin. But I knew that it was okay, that Liz and Jessie do love me, even if I have lost every social skill I ever had which were never abundant to begin with.

Shopping was the same. Feeling as if I was up somewhere near the ceiling, unsure of what in hell I was doing there, but I clutched my list and my pen and checked things off as I went in Publix, and in Costco, I just could not concentrate but that's okay. I know it really is. We will live without maple syrup or pecans in the pantry to replace the ones we are about to run out of.

A little while ago the setting sun painted the sky to the west that intense red-gold pink that somehow the iPhone camera just cannot pick up but now it's dark. The chickens are in the roost and it is very quiet. A few frogs are chirping behind the railroad tracks, begging for rain, I am sure. We are in need of it.

And please know that I am not lonely. I am quite content. This is just all part of who I am and I am way past the point of worrying about it overmuch. Tomorrow I need to clean out the chicken coop, take the trash, stop by the post office, and do a little more weeding if I feel like that. I have an incredible life and soon my husband will be home. Despite having to haul my mind back to reality the way one would tug on the string of a balloon, I had a wonderful time at lunch.

All is well here in Lloyd for me.