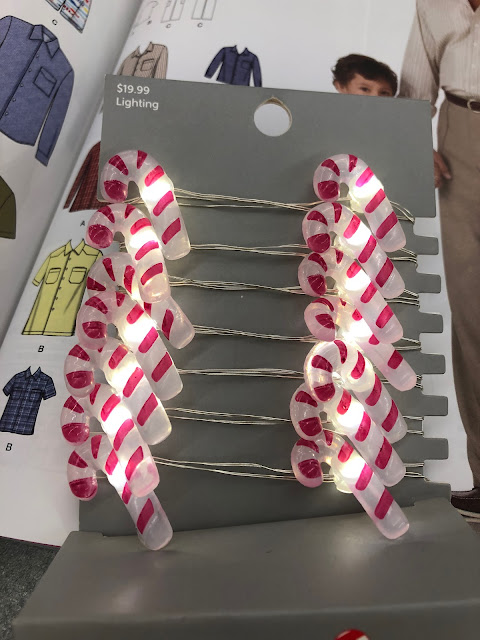 I went to town today and not only did I go to Costco and Publix, I also went to Tuesday Morning and to Joann's Fabrics.
I got nothing at Tuesday Morning. I was going to buy a pot for a plant but the line was about five people long and there was one checker-outer and she was being very friendly and making sure that each of her customers felt as if she was giving them all of her attention because she was and while that's fine, I could not see waiting for however long it was going to take to buy one pot, even if I was made to feel special for a minute or two.
So. That was a bust.
At Joann's I somehow managed to spend about a thousand dollars on three tiny strings of battery powered lights and a pattern and the material to make Maggie a flannel nightgown. And the lights were 60% off!
Okay. It was not a thousand dollars but let's just say that this may well be the most expensive sleepwear that Maggie ever owns unless she buys her honeymoon trousseau at a couture house in Paris.
Of course I had to look at flannel for about half an hour and that's no joke. Despite the large selection, I could not find anything that I thought she would just love so I ended up getting her rooster printed cloth. 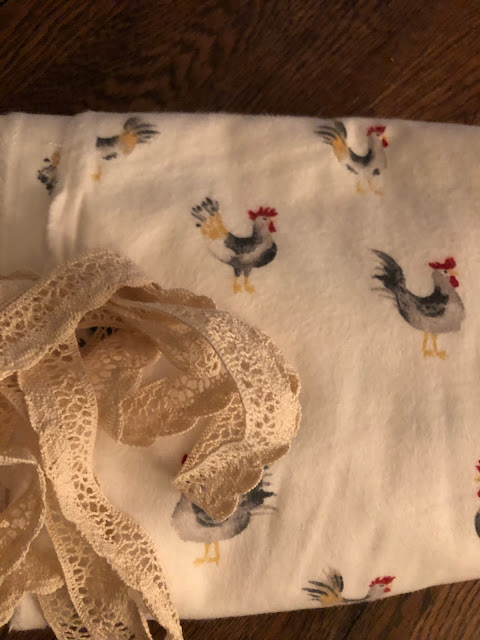 Nothing says Christmas Cheer to a little girl quite like roosters, does it?
It is very soft.
I better get started on that tomorrow.
In Costco I realized that I could not find any fruitcakes. Do you understand what this means? It means that for me, any tiny shred or wisp or hope or sugarplum fairy of a dream of having a decent Christmas just flew out the window. If there are no Costco fruitcakes.
I give up.
I suppose I could make one. I mean, I have before.
Sigh.
By the time I got my lunch this afternoon, it was almost four o'clock and I sat in my car in the parking lot of a sporting goods store next to Publix and ate a sandwich and realized that they were tearing up and tearing down a small piece of woods that separates the parking lot from a road. 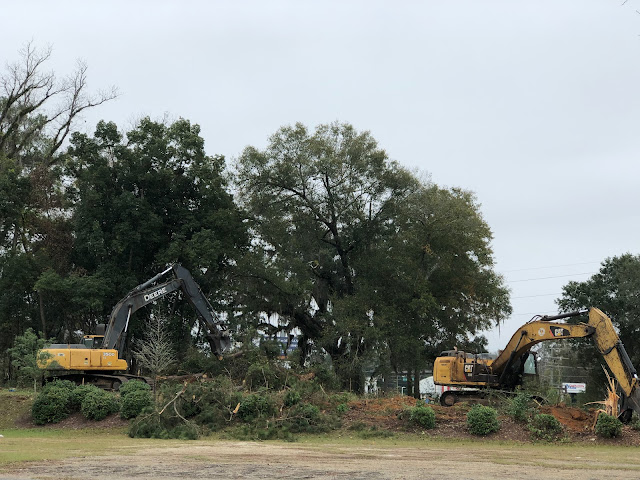 In the time it took me to eat a sandwich, the lot had been over halfway denuded. It was so depressing watching those giant T-Rex machines crunching their way through the trees, pulling and snapping giant pines as if they were blades of grass. I swear, the trees screamed as they left the dirt. I have no idea what they're going to build there but I'm sure it will be ugly. I have absolutely no right to complain because just a little way down the street is Moon Plaza which we built and which had also once been a patch of woods. It now houses a Dunkin' Donuts and a few other businesses. I'm as big a hypocrite as anyone on this earth and I know it.
I swear to you- I never meant to live in Tallahassee. I moved here by accident, in a way, in 1974 and I've never gotten any farther away than Lloyd which is not very damn far. And Tallahassee may have had its charms forty-seven years ago but it's growing less charming every day.
I'm so bitchy today. Also, tired.
Well, here's a picture that Jessie just sent. They got their little living tree up and put up lights. It's a cheerful sight, for sure. 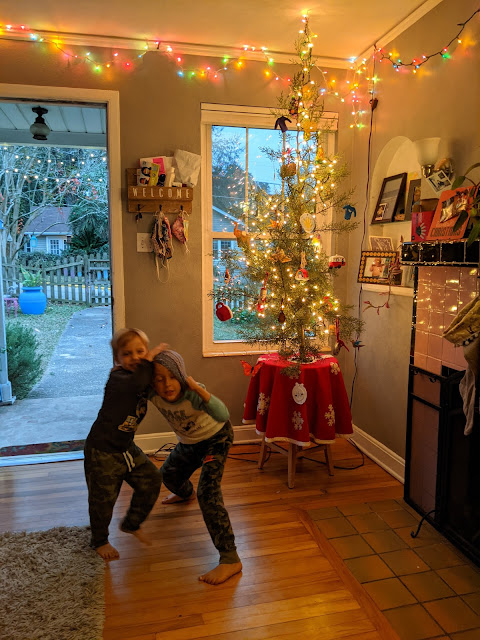 The wolf cubs seem happy with it.
I'll try to be more cheerful tomorrow, y'all but I can't promise anything.
Meanwhile...
Love...Ms. Moon
Posted by Ms. Moon at 5:57 PM