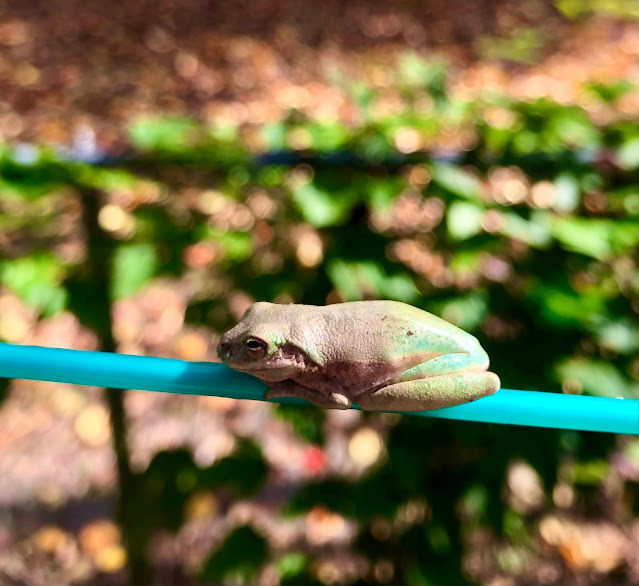 This little one is a green tree frog. The color did not really come out very well and I do not know why. He's not nearly as brown as he looks there. He is clinging to the clothesline and I never in a million years would have seen him if I hadn't been hanging the laundry out today. They are native to this area and not rare but it's always lovely to see one. I love their little faces, their big eyes. There is a page HERE where you can listen to short snippets of their calls.
Or, if you'd like, you can watch a Rated R very short film of what might be happening when you hear them calling.

Sexy times with an intruder sneaking in for the prize. Poor little wooer guy. He sang his heart out and then... well, you watch if you want. Get out your hankie.
Mr. Moon got in last night around 8:45. I was eating my supper and he walked into the Glen Den and I yipped and jumped up to hug him. He was home! He didn't shoot a Tennessee deer or a Tennessee anything but he did stock up on some Tennessee barbecue which is great because no one needs to clean it or cut it. It's done done, as we might say. And it is delicious.
The cats were happy to see him, Jack presenting himself to be petted by the man and Maurice strolling by and pretending not to be interested in the fact that he was back. I think she is very glad he's home though.
I know I am. 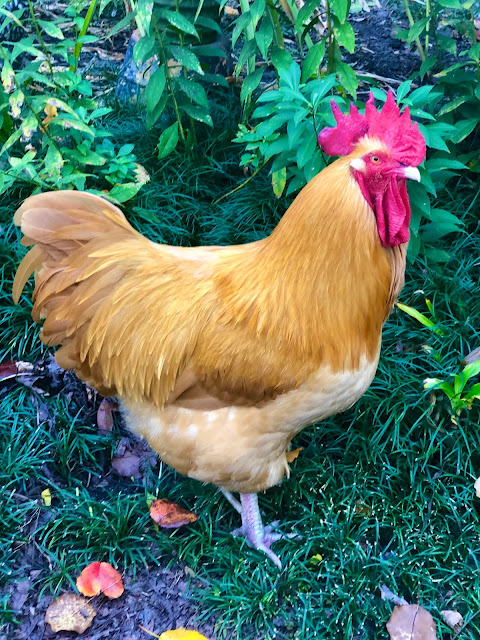 Here's the other alpha male around here. Liberace.
The lovely feathers you see on the back of him in front of his tail feathers are called saddle feathers. Makes sense. They refer to a "waterfall" of the saddle feathers. And the feathers around his neck are called hackle feathers. And there you go- yet one more expression we use based on chickens and/or their behavior. We all know what happens when Mama raises her hackles. When roosters are angry and in attack mode, they raise those feathers high, making themselves look bigger and fiercer. Liberace is not a really fancy rooster but I think his golden feathers are pretty and when the sun shines on them, they glow and glisten as if they'd been oiled. He's still growing his feathers out after his last molt and the tail feathers will get longer. He's a fine rooster, an excellent and very attentive watch guard for his flock, and always on the lookout, not only for potential threats but also for food. When he finds some, he makes his tid-bit call to tell the ladies that he's found treats and they run to see what he's got. And best of all- he's not a mean rooster. He's never so much as raised one hackle around us and he seems to treat the hens with loving care.
A good rooster, like a good man, is a fine and mostly gentle thing.
Well. This has turned into a nature lesson, has it not? I suppose that's because I really don't have much else to write about. I'm still not feeling so very well and took a nap this afternoon. I've left clothes on the line for overnight and that is something I never do. But they're not going anywhere.

I hear the drummer at the church next door getting into his beat, car doors slamming, children calling out. Here we are on our own little plot of dirt, Friday night, maybe a martini won't kill me. It's warm and muggy, December in north Florida, frogs tuning up in the marsh down from the railroad tracks. I can almost feel the camellia buds swelling and opening in the dark, their leaves as green and glossy as the magnolia grandiflora. The ashe magnolias look like sticks now but they are as alive as anything could be, just taking their rest time as are the Japanese magnolias with their bare branches. Before I know it, they will be putting out their lavender-mauve buds, one of our heralds of spring.
I suppose I'm getting ahead of myself there. But time flies so quickly. A blink, a nap, the season has moved on.
This is the way it is.
Happy Friday, y'all.
Love...Ms. Moon
Posted by Ms. Moon at 6:30 PM