From Here To There 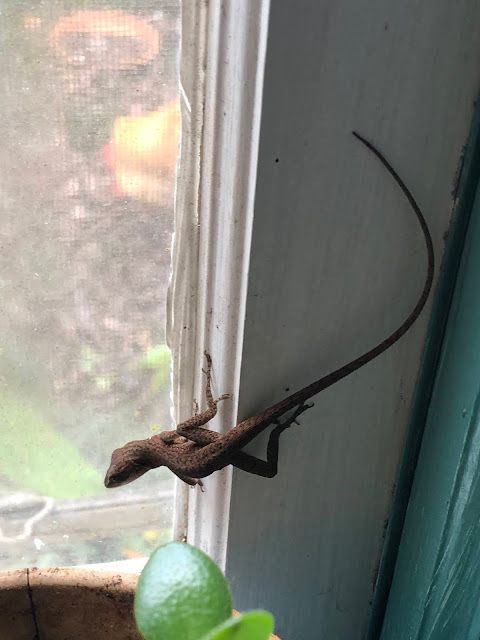 This nice little brown anole posed so patiently for me this morning. I have a windowsill and nook where I have small plants transitioning from rootlings to growing in dirt which I think of as a nursery and almost every time I pass it I actually take the time to look at it, to check on the green babies to see how they're doing and today's little visitor made me happy. I would rather have seen a green anole but we are seeing fewer and fewer of those lately. Here's a good article about why.

Sigh.
It is absolutely inevitable that the invasive Burmese Pythons which are creating such havoc in the Florida Everglades will eventually be moving north and the day I see one of those motherfuckers in the wild is the day I...
I just don't even know. Scream? Move? You know a Burmese Python can eat a chicken. Hell, they can eat DEER!

I did go shopping with Lily today. We went to Target. Since I was there last (and I have no idea when that was but I know I've only been once since covid started), they've redone the whole place. I was already completely disoriented and having a good old fashioned panic attack and that did not help. Poor Lily. She's having a difficult go of it right now and there she was in Target with her mother melting down like the bad witch from the west after having had a bucket of water thrown on her. I wasn't helping, to put it mildly. I did my best to pull up my big girl panties and get along with things and we managed to get the kids some presents despite the fact that the toy selection has already been been cut by what looked like half. The store wasn't packed but there were several traffic jams in that particular section.
After we checked out we went to Welcome to Moe's! otherwise known as just Moe's. It was quite obvious that the staffing shortage has hit them hard. Things were NOT running smoothly and one of the burrito makers had a slight melt-down of her own while we were there. Still, every now and then a nice Moe's burrito is a fine thing.

It has rained here off and on since yesterday and it actually got into the eighties today. I am NOT happy about the heat. I am also not very happy about the fact that I am still feeling unwell. I should not be surprised, I suppose, seeing how the kids have kept their colds, or whatever they are, for weeks now. I feel a little achy again today and tired, my sinuses seem to be unhappy. August is still coughing but has indeed now had a chest x-ray and he does not have pneumonia. I think I may go to bed early tonight. I'm getting close to finishing the book I'm reading ("Harlem Shuffle" by Colson Whitehead- very much recommend) and can't imagine anything much better than settling down with it and a cat.
I talked to Mr. Moon last night and he asked me if Maurice was still alive. I sent him this picture this morning and said, "Here's your kitty." 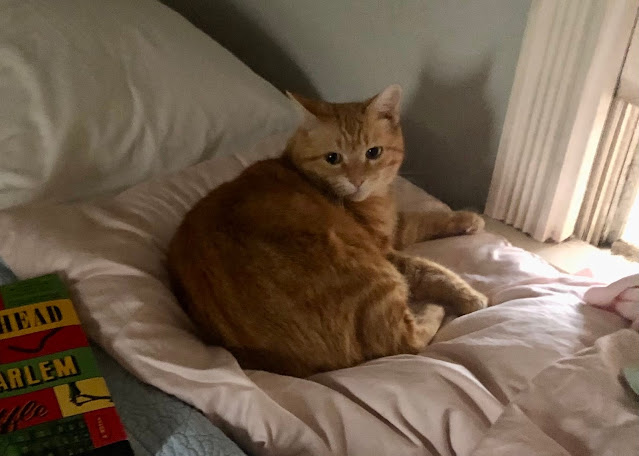 She's been sleeping with me the past few nights. Unlike Jack who seems to want to merge his cat body with my hip, Maurice is quite happy to merely sleep on the pillow next to me which is absolutely representative of our relationship. She sort of wants to be near me but she doesn't really want to get into any of that mushy stuff. A little kiss on the lips now and then, a little ear-scratching, she's good.
And as we all know, she makes her boundaries clear.
Oh. Today is not only the date which marks the day I married my first husband 46 years ago, it is also the 41st anniversary of John Lennon's death. If the body remembers (and I am convinced that it does), it is no real wonder that I have struggled today. Both of those things affected my life in ways that will of course never end. I think back on the woman who experienced both a marriage at the age of 21 and the death of a beloved icon at the age of 26 and I barely recognize her from this distance but she is still inside of me, just as all of the ages of Mary are. Just as all of us hold all of the ages we've ever been inside of us.
Well.
I just felt like listening to this. Maybe you will too.
As always on December 8th, I think of Yoko. And Sean, that beautiful boy.
Love...Ms. Moon
Posted by Ms. Moon at 6:50 PM