Another gloomy, muggy day here in North Florida. It's like it wants to rain so bad that it's put on its rain suit but nothing is happening. Just a constant dense, thick, low, gray cloud cover and everything feels wet, as if maybe it was really raining but we just can't see it. I'm not  complaining. I mean- it's not burning up hot and we're not having a deadly freeze but it's just a bit like we're the audience and the rain is backstage and we're all waiting for the curtain to go up and the rain to come down.
Maybe it hasn't finished putting on its make-up.
Whatever, I went to town today and ran hither and thither, delivering the calendars that I had bought for May and for Hank and Rachel and forgotten to give them as well as eggs and also some books for May. One was hers that I returned, and some are ones that I am lending her. I also bought myself a pair of earrings that I wanted, picked up a prescription, and went to Publix where I bought steaks and other things including an iron skillet. 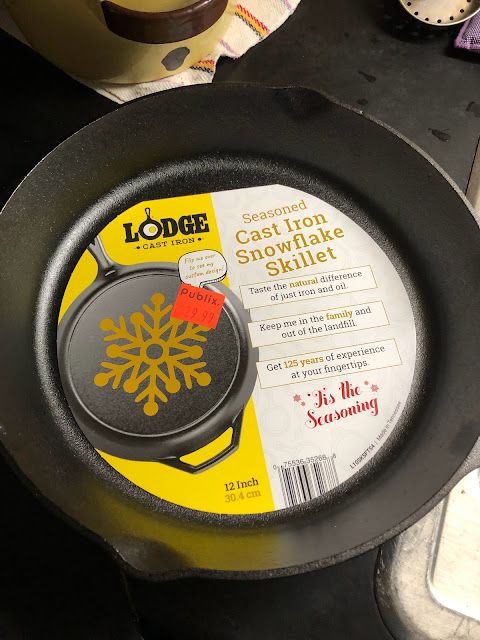 I do not need another iron skillet in the least but I was not going to leave that at Publix when it was on sale for $15 dollars. It's a good one, too, and big. I sent that picture to the kids to see if any of them could use it but no one's claimed it yet. If no one wants it they'll just have to deal with it when I die because I sure as shit bought it.
It was nice to see Hank and Rachel and May. May was at work so I went to the co-op to find her and she introduced me to one of her co-workers who said, "I just wanted to meet the person who raised this beautiful woman." I patted myself on the chest but I should have said, "Hell, we raised each other," because we did. I feel like all of my children taught me far more than I ever taught them. They all came with such unique perspectives and souls and sensitivities and talents that living with each one of them from birth was an education I could not have gotten anywhere else. And now I'm in grandchild school, and learning more.
It's sort of crazy how that works.
Something that I seem to need to work on these days is making snap judgements about people. I never really thought I was a person who did that but I am realizing that I most definitely am. This realization came to me a few days ago in Publix where epiphanies can definitely happen. I saw a woman who had a head scarf on and she was not wearing a mask. First off, I judged her for being maskless, making about a hundred assumptions about her. Then I saw her on another aisle and realized that maybe her head scarf was because she was going through chemo. My mind immediately switched to concern mode- why would someone on chemo not wear a mask in public? But then I realized that no, her head was shaved on one side and the other side had bright pink hair emerging from the scarf.
Back to square one with the judging.
And THEN, I saw her from the back on another aisle and she had a tattoo of an infant on her bare shoulder with some sort of writing that I could not really see and I wondered if she'd lost a baby and my heart sort of broke and I forgave her for being maskless because if I lost a baby I wouldn't care if I got covid or not. I probably wouldn't care if I spread covid or not.
I just wouldn't care.
So there was that experience and who knows? That might not have been her baby or it might have been a tattoo of her baby who is now in preschool, alive and well. Still- the whole experience made me realize how quick I am to create entire scenarios in my head about complete strangers and then judge them on these made-up stories in my mind.
Now don't get me wrong. Those people down the street with the Trump and Maga flags on their pick-up truck?
I'm judging the hell out of them.

I had another experience today that sort of cemented the whole thing in my head though and it involved a woman I saw in the jewelry store who had come to pick up a bracelet which had been repaired. I made up an entire story in my mind about her. I figured she was probably a nice granny like me and was getting some sort of family heirloom repaired and spent her days making cookies for the grandchildren. She was a Black woman about my age and I ended up getting behind her in traffic and my route caused me to follow her (god- I hope she didn't think I was tailing her) to where she turned off to where she lives, maybe, in an upscale housing development. She drove a BMW convertible and the place where I assume (once again) that she lives, was in a place called Weems Plantation.
Plantation!
Every time I pass that place I think, "Jesus, how fucking racist is that?"
And yet...here was this Black lady who probably lives there and, well, it sort of blew my mind.
She was so cool in that convertible and she drove like a bat out of hell and I wished I could have told her how much I liked her style. In fact, she was so cool that she could totally live in a place with the word "plantation" in it and carry it off like a boss. Like THE boss of the damn plantation.
So I need to realize that I don't know shit. Even though I always say "I don't know shit," it becomes more and more obvious to me every day that I think I do know shit but really- I do not.
Know shit.

Meanwhile, I better go make supper. That I do know.
Love...Ms. Moon