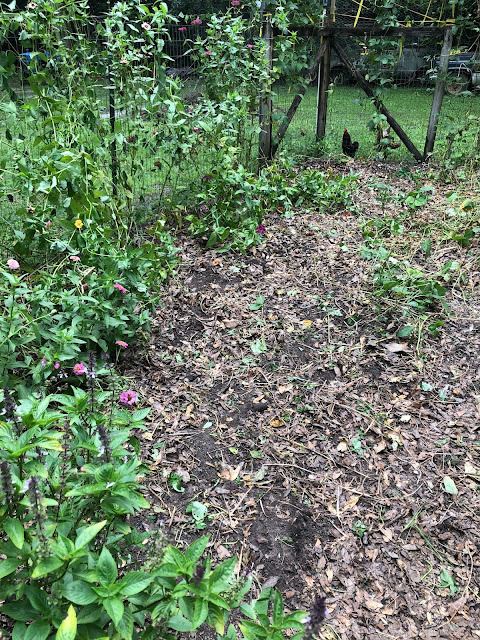 I swear to god, it took me all day long to do very little.

This morning I was determined to clean the hen house and get in the garden and do some more clearing.
BUT FIRST (of course) I took the trash and I stopped at the post office where I got a huge box of delightfulness from a friend, a book I am excited to read from another friend, some assorted mail, and a box containing my Cologuard test.
Well, it was all fine up to that last item. Lovely, in fact!
One of the pieces of mail I got was a notice about a Lloyd area Town Hall meeting to be held next month to discuss the "Potential Economic Development Near 1-10 and State Rd. 59." There was also a sign out front of the PO with this same information.
What the hell? I texted my across the street neighbor who generally keeps abreast of all such developments. She called me back and said she had no idea. So I texted our county commissioner who called me back and explained what was going on and it's long and convoluted but mainly it's concerning an economic site study being conducted at that location which is about a quarter of a mile from where I live. My commissioner is hoping to get people to give their input concerning exactly what types of economic development we want and do not want before they start this whole process.
I just love my commissioner. She doesn't mince words and she's smart and she always seems to have the best interests and concerns of us Lloydians in mind. As I told her today, "We are small and we are not mighty," but she makes sure we have as much might as possible.

So all of that took awhile and then I had to go through the treasure box I was sent and ooh and ah and be stunned and amazed and take pictures to send to the kids, etc. And then I was hungry for lunch and by the time I got to the hen house cleaning it was after one and then a neighbor stopped by for some eggs and we talked and I cooled off for a bit before going back out to work in the garden and by then it was almost three o'clock and I worked for about an hour and then I was done.
Done, done, done.
I cannot deal with this heat. It's miserable being out in it unless you're sitting under the cypress tree at the Wacissa being completely still. But, it does satisfy my need to suffer in a short amount of time so it's an efficient form of mental therapy. 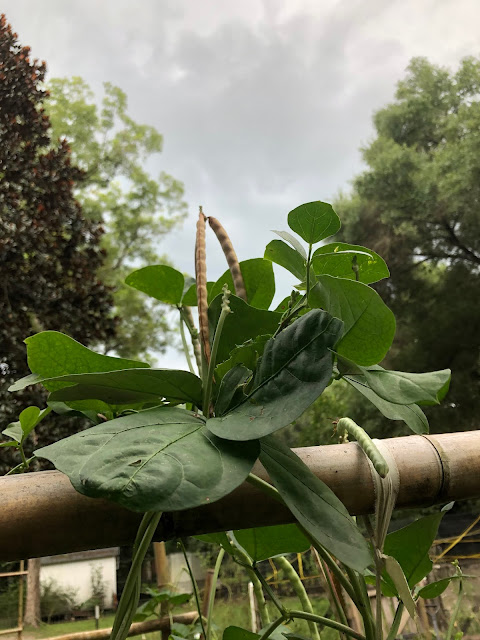 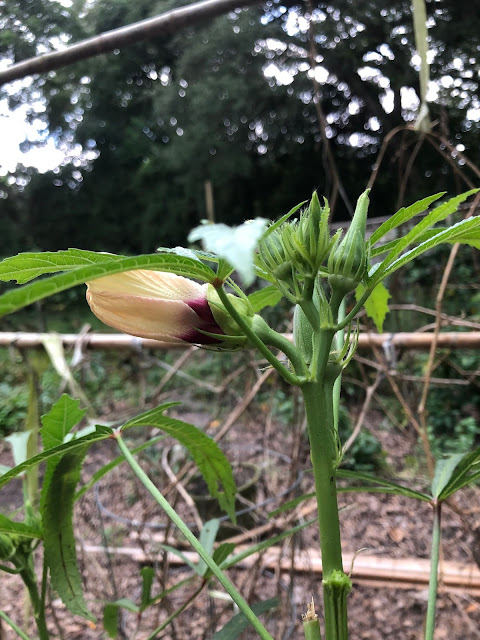 A closed-up okra blossom and some coming-on baby okras. Still getting some of those.
I came in, took a shower, cooled off again and shelled some more peas. I love shelling peas and watching TV. It's so relaxing and yet, somewhat productive at the same time.
So I feel like a halfway decent human being this evening. The hen house is very temporarily poop-free but that won't last long. I have got to get rid of some chickens. Twenty-one is too many for me. Ideally I'd like a little flock of around seven or eight. They go through feed like nobody's business and that stuff ain't cheap. The poop would be beneficial if I'd turn the hay now and then instead of just piling it up. I need to do that and transfer it to the garden to till in and break down in the places we aren't going to plant this fall but that sounds like a hell of a lot of work. I did get a little more of the garden cleared of morning glory vines and spent pea vines as well as some random weeds but it is slow and sweaty going.
Mr. Moon appears to be surviving Nevada. He texted me earlier today and asked if I was worried about Hurricane Ida and said that he would come home if I was. For those of you who do not have the National Hurricane Center as a bookmark in your browser, there is a hurricane heading towards the Gulf that looks to become either a category three or four and that is not nothing. That is scary as shit. But all of the predictions and models are saying that it's going to land way west of here and although I worry horribly about Louisiana I am not too concerned about it heading here. So I told my husband that no, I was not worried and I'm not. But I am very glad that the generator may actually get hooked up tomorrow.
Although...my neighbor who came for eggs commented today that I should realize that if we get a storm and power's out for awhile, all the neighbors will be staying here.
I had a flash image of this house filled with neighbors, children, their spouses, partners, and the grandchildren and I wondered if we were making the best decision here.
Just kidding!
Mostly.
So in good news it would seem that a Leon County circuit judge has ruled that our murderous governor, Ron De Santis overstepped his authority in creating the mask mandate ban. Read about it here if you really want to.
And speaking of weather, we've got a nice downpour going on with shake-and-quake-producing lightening and thunder. As in- so close and so loud that my house is shaking with some of them.
Oh, Florida! We are all summer's bitch here this time of year.
I got an alert advising me to seek shelter and yet here I am, on the back porch sipping a martini, watching and loving the gray percussive curtain of rain falling.
Well, I know where the flashlights are but I sure as hell don't want a power outage tonight. It seems to be passing.
I think I might make that curry tonight.
Happy Friday, y'all.
Love...Ms. Moon
Posted by Ms. Moon at 6:43 PM