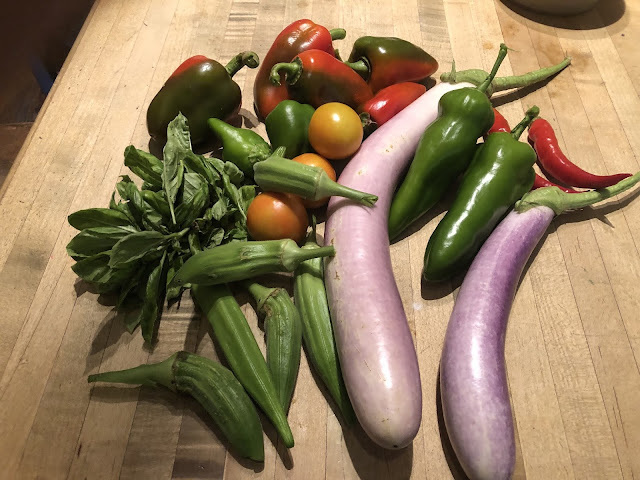 That is what I picked from the garden last night but I left a whole bunch of peppers behind and a few eggplant, too. So we're still getting a few things. I made a sort of focaccia pizza for our dinner as I said I would and it was okay. 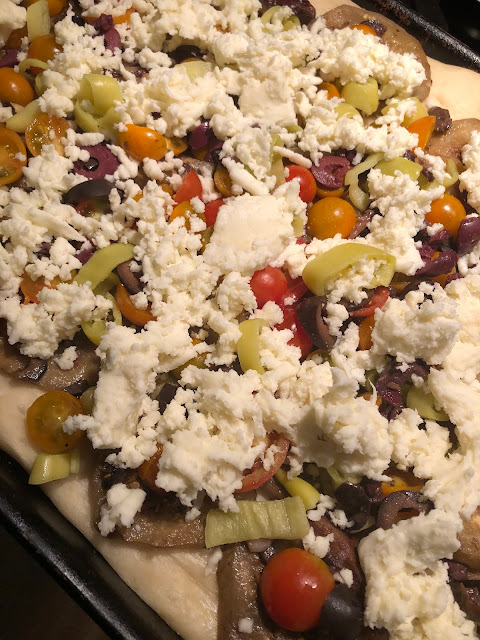 That's what it looked like before it got sent to the oven.

Yesterday I felt as if I had achieved and accomplished a lot but today has been a frustrating day. Absolutely nothing is really wrong but absolutely nothing went smoothly. I took another walk and added a half a mile which was just about more than I could deal with but I did get this picture. 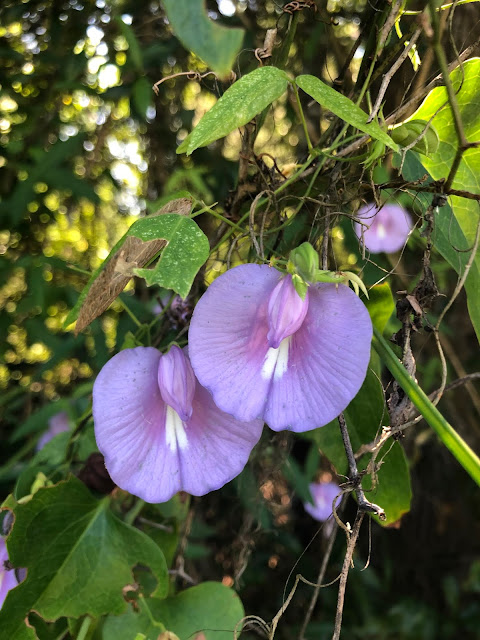 The clitoria is blooming and every year the sight of those delicate, lovely lady-part flowers cheer me. By the time I had finished my walk, though, I didn't feel like I had enough energy to do a damn thing. The idea of starting in on the Glen Den was absolutely NOT appealing. So I did not do it. I fiddled around for a few hours doing I don't even know what and then I decided to start supper early so I wouldn't feel rushed tonight. I had decided to make the beautiful creamy cashew butternut squash soup that I love and had just started to soften my onions in olive oil when the gas turned off and I realized that of course that was going to happen because the gas guys were here to hook up the generator to the gas and they had to turn off the gas in order to do that.
Oh well. So much for an early start on supper. It's in the simmering stage now- I did eventually get to it- but I didn't use butternut squash because I didn't have any. Instead it will be a delicata squash and sweet potato soup because that's what I did have. I am not sure I've ever actually made the soup with butternut squash anyway. I generally use acorn squash and sweet potatoes but I always use sweet potatoes.

While I couldn't cook, I decided to get back to the pocket project and I finished one pocket but when I tried the dress on with the pocket to see how it was working before I did another, I decided that it was NOT working at all and so I spent about thirty minutes ripping out that pocket and I still haven't re-sewn the dress seam to complete the undoing of the pocket project.
So much for THAT!

One of my cats shit on the kitchen rug today. I swear to you- never have my cats shit in the house except for perhaps once when their access to the outdoors was accidentally blocked off. I was not so much pissed off as worried that one of them is sick. There is the possibility that a stray cat came in the house and did it to mark territory because early this morning there were TWO strays on the back porch (there is a cat door there) who got into a fight and woke us up. I'd much rather believe that than that one of my darlings is ill.

So the day has been like that. Still, there have been some lovely things too. I picked some more zinnias today. They are almost too beautiful to bear. 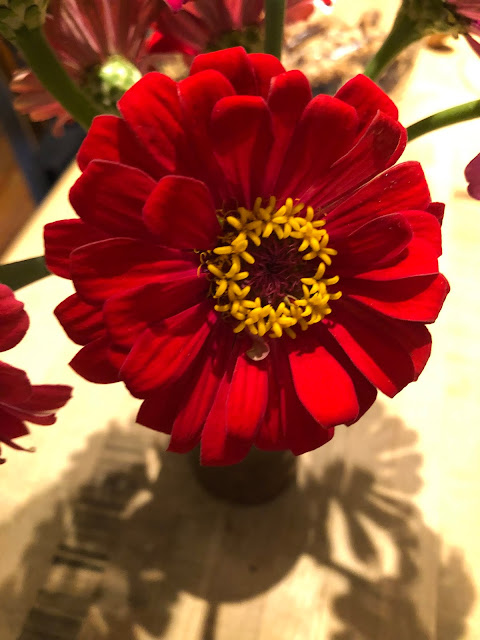 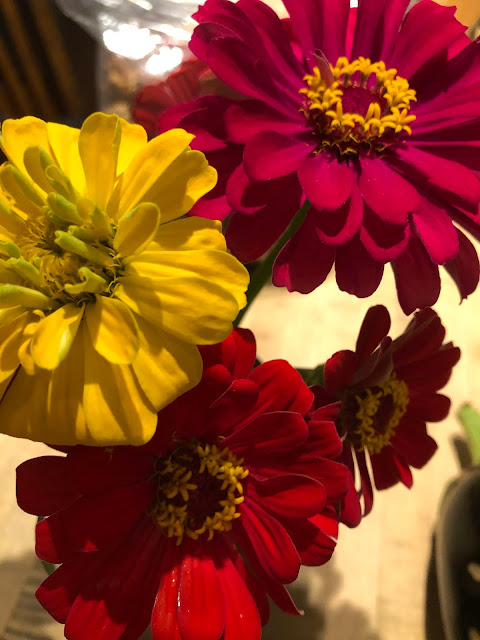 The colors just knock me out. I'm not the only one who loves them. 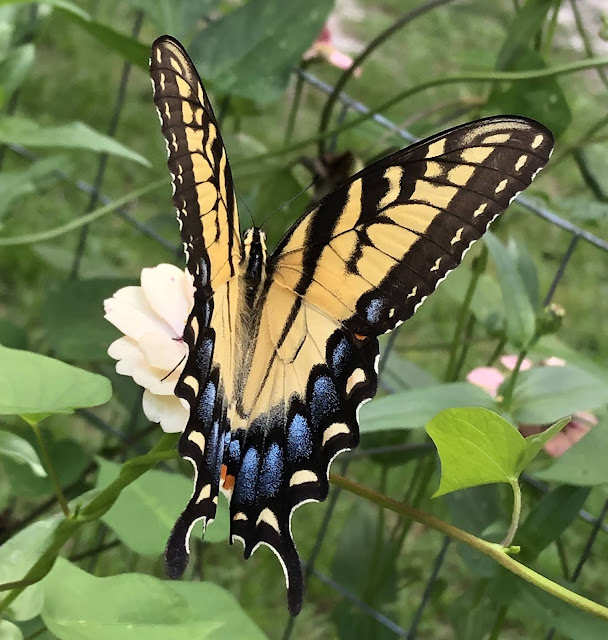 Another far from perfect picture. I think this is a giant swallowtail but please correct me if you know I'm wrong.

Okay. So. A lot of you were curious about the color coding system of classroom behavior control (and I'm sure that's not what it's called) and so I asked the kids about it. Jessie and Lily remember it being used when they were in elementary school and since I don't remember that, it may indicate that it was not too traumatic. I take it that this is a commonly used system in schools. Jessie sent me a hand out from the school which explained it thus:

Students will start each day on "green". Green behavior allows your child to do fun centers at the end of the day. You will receive a note in their behavior calendar if your child receives a yellow or red. Students may also earn purple behavior. This is above green and shows that your child went above and beyond in the class and earned treasure box.

Purple- Great day/went above and beyond
Green- Good day! (this is the color all students will start out on each day)
Yellow- Had multiple warnings throughout the day
Red- After many warnings, behavior continued/Needs improvement

Sounds like a lot of damn work for the teachers to me. But I've never been a teacher and this may be a valuable tool. August reported that he achieved purple today because he was quiet.
I don't know. It still seems sort of creepy to me. But it's not nearly as bad as how teachers controlled behavior when I was a child in elementary school which was the age-old method of paddling. In fact, it wasn't just elementary schools that practiced paddling. It was an approved practice in Jr. and Senior high schools.
So there is that.

Tomorrow I'm going to town to babysit Levon for a little while after he gets out of school so his mother can go to an appointment. I am looking forward to that. I never get time alone with that boy and I think it will be sweet and far less frustrating than today's events have been.