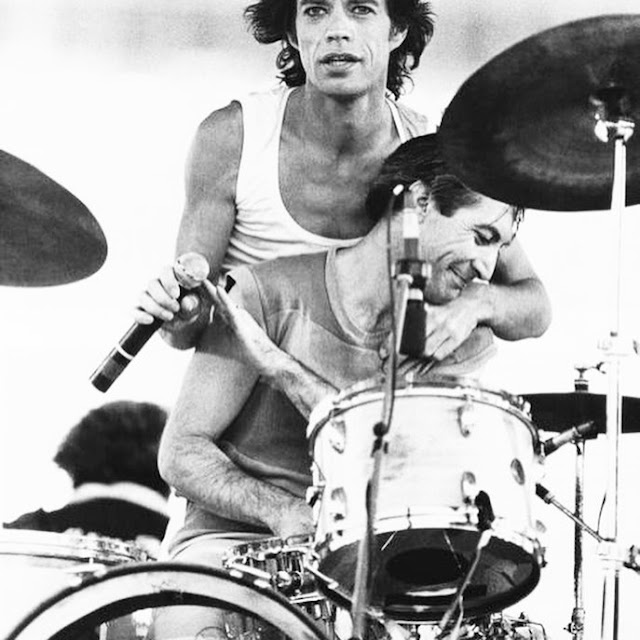 I guess I love this picture so much because Charlie Watts looks so happy in it. The arms of his mate wrapped around him. I'd never seen the picture before today and it's usually Keith who has his arm around Charlie. You can find pictures of Keith hugging him all the way back to the sixties. But you know- Keith is a hugger.

The first I remember hearing the Rolling Stones- I mean, specifically heard them to the point where I remember vividly. I was in my room in a house that we lived in in Winter Haven. Bad time for Mary Miller. That was me. My stepfather was still visiting me in my room at bedtime. Don't quite know how he got away with that. His and my mother's room was about seven feet away down a hall, bathroom in-between. The ruse, the story was that he was "telling me goodnight."
I was probably eleven, twelve. My mother was sick a lot. Headaches. Then pregnant. She stayed in bed days at a time. Considered her husband to be such a good father- look! He tells our little girl goodnight every night! He spends time with her.
I remember how the rattan rug felt on my knees when I got down on it to pray sometimes that things would get better. I was going through a Billy-Graham-on-TV inspired phase.
Jesus would help if I just asked.
No relief in that.
Dang, Jesus.

Then, one day She's a Rainbow came out of my wooden radio. Yes. Wood cabinet radio. Dial like a clock hand that rotated from the bottom center, controlled by a Bakelite knob. Two knobs. One to turn it on and control volume, one to inch the dial in infinitely tiny degrees to find the stations hidden within the static.

That song. The tinkle of the piano. The words. The words.
The words.
She comes in colors everywhere. She combs her hair. She's like a rainbow. Have you seen her dressed in gold? Like a queen in days of old. She shoots her colors all around. Like a sunset going down. Have you seen a lady fairer?

They were talking about a girl and it was just so purely sweet and so pretty and it wasn't like anything I'd ever heard before and it was a different world that I slipped into and felt like a different girl myself.
For a few minutes. While it played. A girl who was so shining that she could shoot colors everywhere. She combed her hair. Like a rainbow.

I've been crying off and on since I heard that Charlie Watts died this morning. Hell. He was eighty years old. Had cancer seventeen years ago. What did I think? He was immortal?

Aren't all those Stones? Immortal? They've been here forever. Why should that change?

They never did one damn fucking thing they were supposed to do. Not one. They didn't even look the way they were supposed to. Those matching suits didn't last long with them. And you ever hear the term "ugly beautiful"? Yeah. Like that. Except for Brian Jones and he was crazy and they had to kick him out of his own band and then he died.
The Beatles? Even though their hair was shockingly long (for the time) you knew you could bring one of them home to meet your mother. She would have loved Paul McCartney. Ringo would have made her laugh. John would have charmed her with his intellect, his wit.

And wasn't that their charm? Wasn't that why we loved them? Even your mother would have known what they had on their minds. They teethed on blues music from America. They ingested it and digested it and copied it and jumped onstage and played it and then wrote their own songs with the juice they'd swallowed and it was rock and roll.
Little Red Rooster indeed.
Dirty. Filthy. Raw. Gender-bending. Sexually fluid to the point that who DIDN'T want to fuck them?

My stepfather quit coming to my room. I think I got too old for his interest. Wasn't long after that that boys my own age started showing interest. This, however, felt very, very different. I realized that I had control over...something. I may not have known that I too was like a rainbow but I knew that boys might look at me as if I were. The Rolling Stones told me that boys liked girls that liked what they were singing about. My mama may not have known I could bite like that, but Mick Jagger did. He gave it his seal of approval. And I could bite or kiss whoever I wanted. Because it was my choice. It was my body.
When I was finally allowed to date at the age of sixteen and I remember my stepfather crying when I went on my first real date with a guy a year older than me, big and hulky, a football player.
Too bad. Weep away, DAD. You don't own me.

But Charlie Watts. He died today. He was already playing with a successful band when the Stones hired him. They had to pay him because you know- he was already making money. Keith Richards says they shoplifted food to eat to be able to afford to pay Charlie five pounds a week.
Priorities, baby. 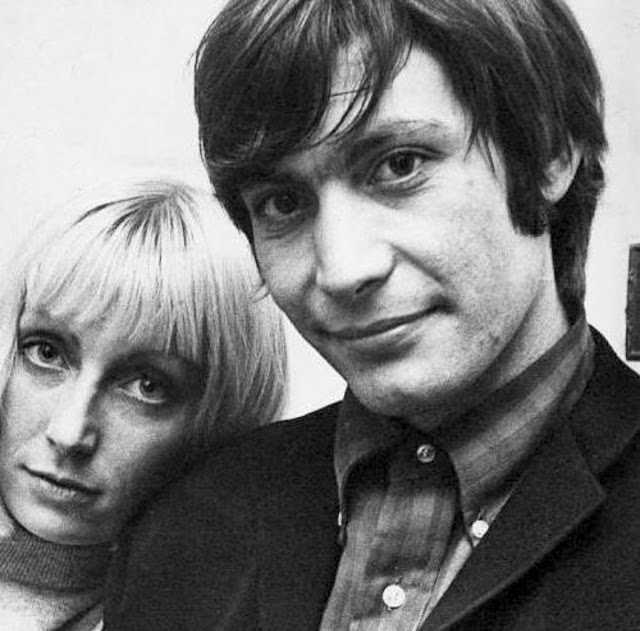 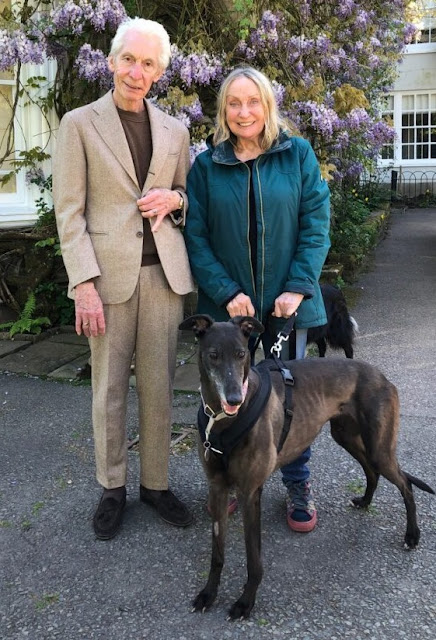 They were married when he died. Today.
They had a daughter named Seraphina. They raised horses. Charlie loved jazz. He loved jazz so much and yet somehow, he became the drummer, the heartbeat, the make-you-dance-like-no-other-drummer-in-the-world for the greatest rock and roll band of all times.
He was quiet. He rarely gave interviews. As he said, "I'm usually just mumbling in the background." He thought that all of the screaming women in the audiences they played to were "just silly." He dressed like a duke, a dandy, a model, the most elegant rock and roll drummer in the world.
He was always the coolest guy in the room.
That's saying a lot in that he was in a band with Keith Richards.
******
Here's a quote from Keith's book, Life.
There was a rare moment in late 1984, of Charlie throwing his drummer's punch- a punch I've seen a couple of times and it's lethal; it carries a lot of balance and timing. He has to be badly provoked. He threw this one at Mick. We were in Amsterdam for a meeting. Mick and I weren't on great terms at the time but I said, c'mon, let's go out. And I lent him the jacket I got married in. We got back to the hotel about five in the morning and Mick called up Charlie. I said, don't call him, not at this hour. But he did, and said, "Where's my drummer?" No answer. He puts the phone down. Mick and I were still sitting there, pretty pissed- give Mick a couple of glasses, he's gone- when about twenty minutes later, there was a knock at the door. There was Charlie Watts, Savile Row suit, perfectly dressed, tie, shaved, the whole fucking bit. I could smell the cologne! I opened the door and he didn't even look at me, he walked straight past me, got hold of Mick and said, "Never call me your drummer again." Then he hauled him up by the lapels of my jacket and gave him a right hook. Mick fell back onto a silver platter of smoked salmon on the table and began to slide towards the open window and the canal below it. And I was thinking, this is a good one, and then I realized it was my wedding jacket. And I grabbed hold of it and caught Mick just before he slid into the Amsterdam canal.
I absolutely love the idea of Charlie shaving and getting fully and carefully and tastefully dressed before he threw a punch at Mick Jagger. I feel certain that Mick got the point. I feel certain that he never, ever called Charlie Watts his drummer again.
******

Charlie Watts never seemed to really enjoy the glamor, the glory. One gets the feeling that if it was up to him, he would have simply retired to his farm with his wife, happy to live that British horsey life.
And yet.
Every time he was called up (and I hear that he only communicated via the postal service) to come back to the studio, to tour, he went. Of course he had to join them.
He was a Rolling Stone. There were really only four of them left. Three, if you count the true originals.
Mick. Keith. Charlie.

And now he's gone. I don't think it would have been so hard to imagine him dying if he had just retired to the farm with Shirley but because he did continue to play, to be the very heart beat of the greatest rock and roll band of all times, even at the age where most people are content to lay back and rest on their laurels, it doesn't seem real.
Here's what Keith Richards just posted on Facebook. 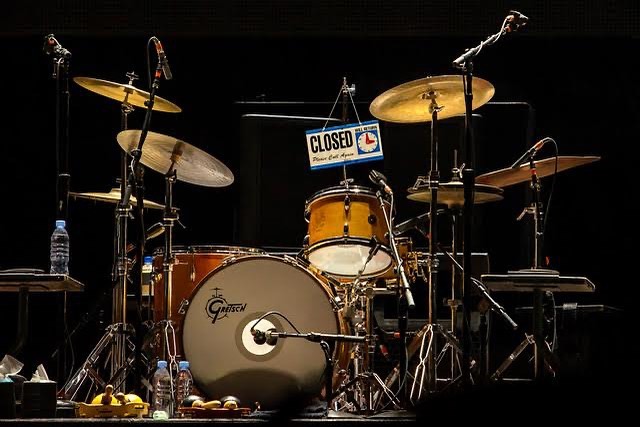 ******
There's more to it than that. Of course.
But that's what I'm thinking tonight which is different from any other night since the day I heard She's a Rainbow on my radio. For me.
This version doesn't really have much of Charlie in it but I think it's a beautiful video of a song that changed my life and he is there.
He is there.
Always the one in the back. Always the one keeping the rhythm which is the heartbeat, the waves, the breath, the soul, the pulse, the orbit, the very beginning of music and poetry and dance.
Gold rings on ya', Charlie.
Gold goddamn rings on ya'.
Posted by Ms. Moon at 7:35 PM