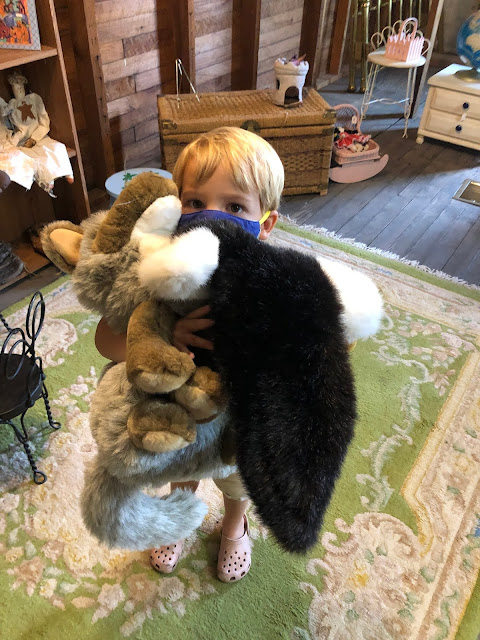 Can you see the little boy behind those animals?
That's Levon. I asked him if I could take his picture and he said that I could but to wait while he got ready. Getting ready involved picking up and holding a coyote puppet and an eagle puppet. We were in the antique store where the chaise lounge is that I thought I wanted a few weeks ago. The coyote and the eagle are not actually antiques and I'm not sure why they were there. Collectibles? They still had their original tags. One does not question certain things and the items in the upstairs part of an antique store is one of them.

A few days ago I asked Lily and Jessie if they would like to take a trip to Monticello sometime this week for Wag the Dog and antique shopping and lunch. They both said that would be wonderful and we arranged it for today. Thursday is not a day that Levon's in school so Jessie didn't have to pick him up at noon and he was such a fine boy that having him along was only a pleasure. We asked him at lunch if he liked being the only kid or if he missed August and Maggie who, before they started kindergarten, always came with us on these Monticello trips. He pondered for about half a second and then said, "August and Maggie. And Gibson. And all my family."
"You miss them?" we asked.
"Yes," he said. But he didn't make a fuss about it. I can't believe he's the only baby left and of course he's not a baby at all except he's our baby. He's a smart kid with ideas of his own and I don't think he appreciates my sudden kiss-and-hug attacks although I do always apologize and say, "I'm sorry. I just couldn't help it."
He gives me a look but he also slips his hand in mine when we're walking down the sidewalk.

So. Back to the chaise. I completely changed my mind about it today. Somehow it just didn't seem as lovely and when I tried to lounge on it, I noted that it really wasn't very comfortable and what's the point if it's not comfortable?
I feel as if I have closure now which is a relief.
I did buy Levon a hat that he wanted very much and I bought a little present for someone because I fell in love with it and thought that maybe the person I bought it for might fall in love with it too.
I hope so.

We went to lunch at the Rev, of course, and there were no car wrecks today so it wasn't nearly as exciting as the day Lis and I went there. But there were trucks for Levon to see, circling around the County Courthouse and he seemed to like his fried fish and french fries and again, he was a very sweet boy while his mama, his grandmama, and his aunt ate lunch and chatted. 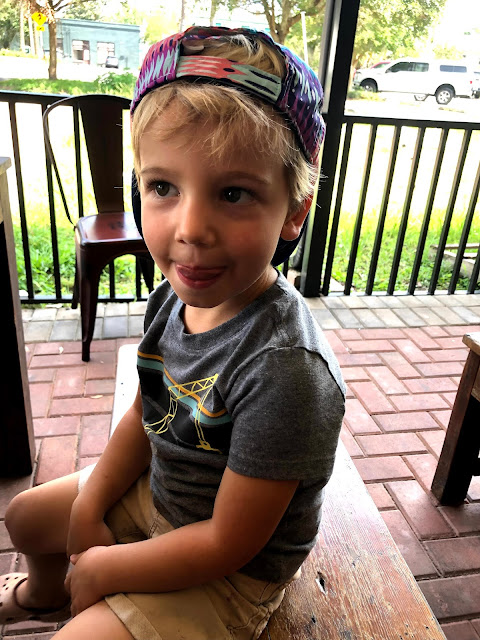 "Give me a bite of salad," he said to me. And I did.
We went to Wag the Dog too, but not until after lunch because they didn't open until one. I donated two bags of things I had culled from the house. A small but potent relief. We didn't have much luck at Wag today. I went through the yarn again but I talked myself out of buying any. Lily bought a few saucers to put under plants. Jessie bought a building set for her boys. Levon was very happy about that although he was quite tired and a bit over it by the time I took this picture. 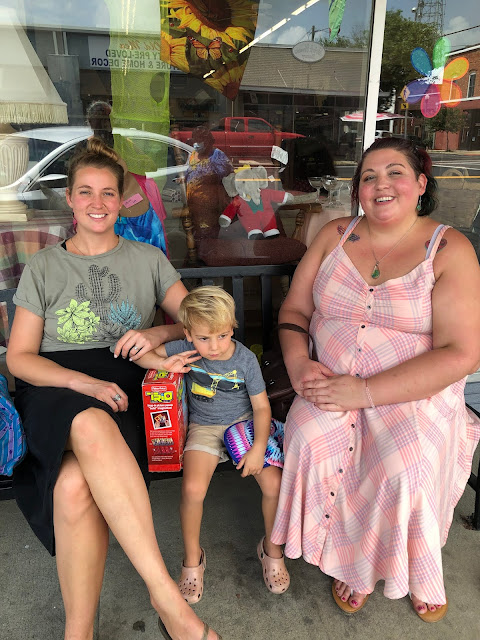 We stopped at the farmer's market on the way home and Lily got some fruit and vegetables. While we were there, Lon's sister and her husband showed up and we got to chat with them.
Monticello is a very small town.
And then it was time to leave so that the mothers could pick up the young'uns at school. Lily and Jessie had met at my house and I had driven so back to Lloyd we came and Jessie transferred Levon's car seat back to her car with him asleep in it although he woke up before they left and said, "Who moved me to our car?" He didn't seem overly concerned, just curious.
So I got my socializing time in today and that was lovely. I love watching my daughters together, laughing and talking about things from the serious to the ridiculous. I asked May if she wanted to come along as she's off on Thursdays but she is super concerned about the amount of exposure to the Delta variant she's getting at work and didn't want to unknowingly expose us. We talked last night on the phone for a long time and she said that it's not uncommon for unmasked people to come in and ask for suggestions for supplements to help "cure" their kids who have covid.
Sigh.
She's double-masking. She's being as careful as she can be. But dear god, people are so stupid. She says that she's had a couple of people come in and ask for that livestock dewormer people think will cure them of covid and she has to tell them that no, the Co-op does NOT carry it and besides that, they need a prescription for it. From a VETERINARIAN!
The human race, as far as I can tell, is just fucked. And sometimes I think, well- okay. We've had a short but decent run. If it's time for us to go, it's time.
And then I do something like watch a documentary like the one I watched on Netflix while I was shelling peas this afternoon, about drummers (this came out before Charlie Watts died) called "Count Me In" and I think about the sheer beauty of human beings playing the drums for no other reason than because they simply must and I think, Well, you know. Some things people do are pretty damn awesome. We might have a little bit of god stuff in us, twisted into that double helix.
And then I think about people refusing to get a vaccine but feeling absolutely fine about taking livestock dewormer and I think that we don't have that much god stuff in us. Not nearly enough, anyway. Or not most of us.
Mr. Moon called me while I was in Monticello and he says he's fine. Zion National park was amazing, of course. He claims he misses me. I miss him too. Funny how used to being together all the time we've become. But we'll both survive.
Or at least I think we will.
He sent me a picture via text. Here's the screen shot. 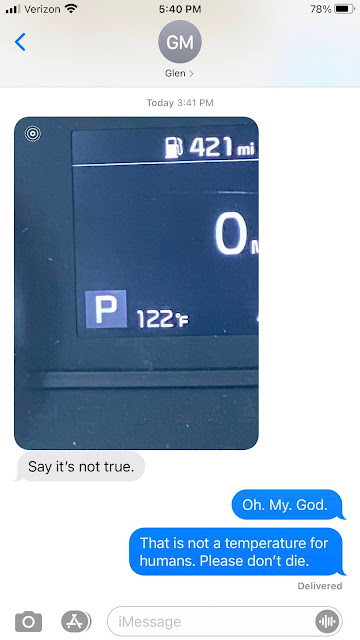 My replies are in blue, of course.
That's just...well. It's horrible.
Hell, it feels horrible here and our temperatures are only in the upper 80's and low 90's but of course our humidity is far higher than it is in Utah or Nevada. Still, a hundred and twenty-two degrees can kill your ass no matter what the humidity is.
And on that cheerful note, I think I'll end here. I really do not care to comment on the news. More evidence of the probable end of humanity and the fucked-upedness of people in general.
Be kind, y'all. Be kind and be safe and be masked. Be vaccinated. Be steadfast and steady, be loving when you can and try to be tolerant when you can't. Beware and be aware that most of us are doing the best we can. That's not always very good but be cognizant of the fact that we all live in glass houses and should search our own hearts and minds before we pick up that first stone. Speaking to and for myself, at least.
Be well.
Love...Ms. Moon
Posted by Ms. Moon at 6:54 PM