A Day To Feel Fortunate

Well, today has been a different sort of way. Part of it was quite stressful but things resolved and then it became lovely.

Lis and I had planned to get together today for a little more shopping in Monticello but we both had things to do this morning so we were going about our separate chores when I got a text from Hank that he was having an episode of irregular heartbeat again and that Rachel was taking him to the ER after he'd waited for half an hour to see if it settled itself back to a normal rhythm. My blood pressure probably soared as I remembered the last time this happened and he was in the hospital for days and of course the worry for my boy overtook me but I tried to stay calm. With the things the way there are right now in Florida, the hospitals being full of covid patients, they wouldn't even let Rachel stay with Hank so I knew there was nothing I could really do except wait for word.
And the words were good. His heart went back to its regular beating but they kept him and ran many tests just to make sure all was well and a little while ago he let us know that he is home and everything looks good.

We are all so glad and grateful. I am sure that both he and Rachel are exhausted- a long day of worry and concern. Hopefully they will sleep well tonight.

When I knew that things were going okay with Hank, I met up with Lis in Monticello. There were a few others stores we both wanted to look around in and we also both wanted more of that yarn. Lis has actual plans for hers. She will make Christmas presents.
Me? Well...uh...not so much. I just had to have more. I do not generally hoard things but there are a few things that I cannot resist if I find an incredible deal on them and these yarns are exactly that. While we were rummaging through the bin Lis had discovered earlier in the week, a woman told us that there were two more bins in the notions section with more beautiful yarn.
Ooh boy. We trotted right over there.
And she was right.
We found some skeins of stuff so soft that it felt like a baby's tresses. 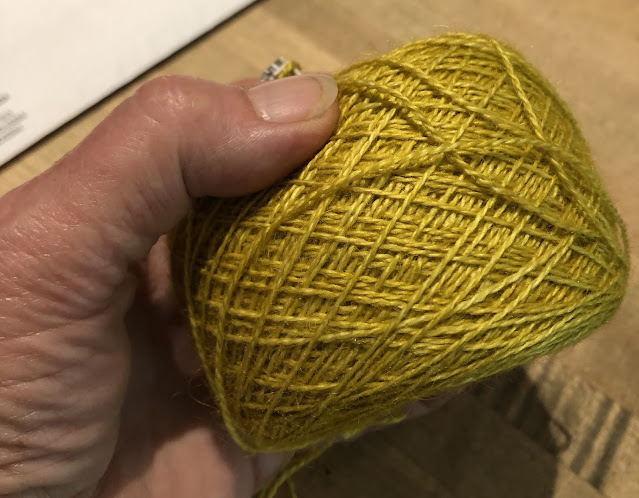 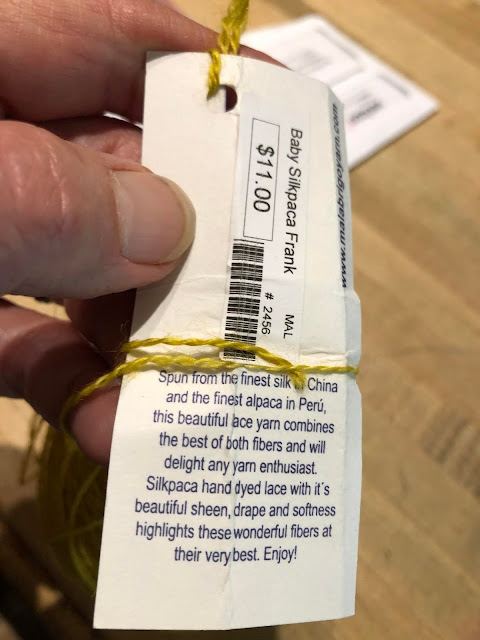 Lis plans to use the skein she bought for lacy edges on projects. I bought two skeins and again, I have no idea what I'll do with them. I remember after my friend Sue died and in my grief period I took up the smallest crochet hook and cotton thread and crocheted little lacy bags that had no function whatsoever. Was I trying to contain her spirit or was I merely keeping my hands busy and my focus on a sort of reality? I do not know.
Of all the bags I made, I only have one left. I have no idea what I did with the rest of them. 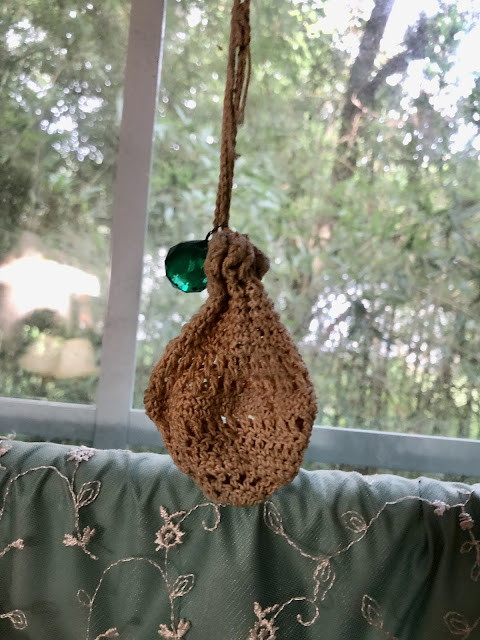 It hangs over my tub in the bathroom window. The Baby Silkpacca is much thinner and of course finer than the cotton strong was and I'm not sure at all if my needle skills extend to working with such a material. Perhaps something will occur to me that I am capable of. I hope so.
And that was all we bought today although we did look at another store but there was a very annoying man in there and it was also hot AND the prices were ridiculous. We ended up going back to the Rev for some iced tea and a snack and then we sat in Lis's car for a good long while, continuing our chat.
It's as if this past week and a few days has only opened our hearts more to each other. When it was really and truly time for me to get in my own car and come on home, I teared up and Lis said, "Are you going to cry?"
"What do you think?" I said. "It would only be surprising if I didn't."
And this is true. Lis knows how easily I am moved to tears, quite literally, just as she knows so much about me and yet, somehow still loves me.
Isn't this the most wonderful thing on earth? When someone does know you and your faults and your issues and your weirdnesses and your shortcomings and still loves you- well. There is no feeling that can match that whether we are talking about the love of a partner and lover or of a friend. Or a child, for that matter.
I hear that having that sort of love from a parent is also a beautiful thing but because I didn't have a father and because I never felt that from my mother, I would not know. My mother may have loved me like that but I never thought she did. This may have been my- what? Fault? Mistranslation? Misunderstanding?
I don't know. Probably neither of us was somehow set up to allow that sweet unconditional love to flow between us. And I think that when that primal need is not satisfied when we are children, we do seek it our entire lives. Either that or we become people who refuse to care what others may think of us or else we hide our true selves from those we wish would love us in the belief that if they did truly know us, they would shun us.
This is all to say that I am going to miss my friend so much when she leaves. And that will be on Friday.
I feel so lucky that we've had this time together. It has been a sort of comfortable bliss.
We hope to get together tomorrow if for nothing more than coffee. I still have plenty of half-and-half. Gibson will be coming over at some point to spend the night. It is his turn to hang out with his Mer and Bop. "I just want to spend time with you," he told me the other day. I am looking forward to that. I will make him meatballs and spaghetti and he will get his purple cow and I am sure there will be much to discuss with our darling Gibson, the huggiest and smiling-est grandchild of all.
Here's a picture that I took in Monticello of the side yard of house. 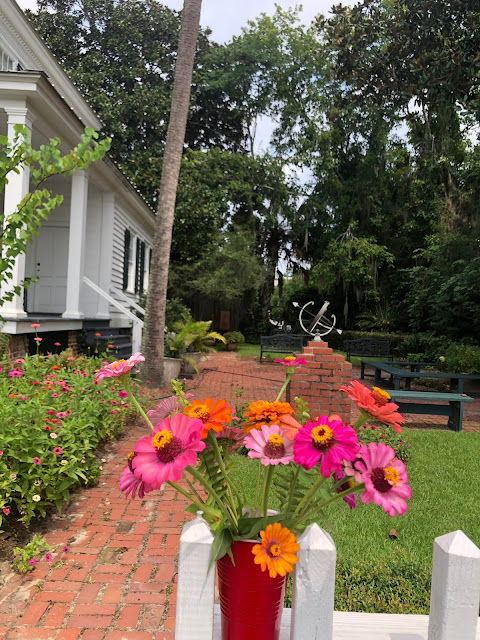 For some reason they had put a red solo cup of zinnias in front of a bed of zinnias and I can only say that there can never be too many zinnias. We spied this right after a guy in a truck heading from west to east stopped to block the traffic so that Lis and I could cross the road on foot, traveling the same way.
As I said then, "Only in Monticello."
Love...Ms. Moon
Posted by Ms. Moon at 6:20 PM