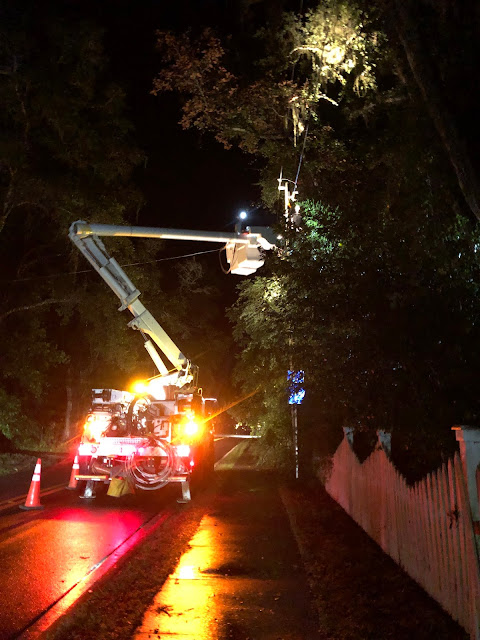 Well, no curry here tonight. The power went out right after I hit "publish" and we were having a toad-strangling downpour, even though the lightening and thunder had passed. I called Duke Energy and got a sweet lady on the line and we chatted for a few. She said, "Just take it easy and you'll have your power back on in awhile." I said, "No problem. I'm going to play solitaire and listen to a podcast," and she said, "That sounds lovely."

So I did that for quite some time and I ate some second-rate supper and finally I called Duke again to hopefully just get a recording of an update but no, I got the same lady and we chatted some more. She was so nice and told me that her AC had gone out last night and that tomorrow she was going to go kayaking with her dog. We ended it with her telling me that I should have my power back on soon and wouldn't you know- a truck pulled up right by the house and I had to go out and take a picture because by then I was fully invested in the whole situation.

I talked to the ZZ-Top bearded guy who was on the ground while his partner was up in the bucket and he was so southern that I could barely understand a word he said but I'm certain they were very polite words and I did understand him when he said, "You should be back on in a minute," and when I offered him and his partner water or coffee, he politely refused saying that they were fine (I think that's what he said) and I said, "Well, y'all are my heroes" and he thanked me and I came back inside and the power came back on almost immediately and then he knocked on my front door to make sure that everything was back on. I thanked him again and he said, "Call us if you need us," and I said, "Oh, I will. Be safe, y'all," and he said they would, and off they went into the night.

It's been an adventure and all has turned out well and I feel a little bit better about humanity than I did before, strange as that sounds.