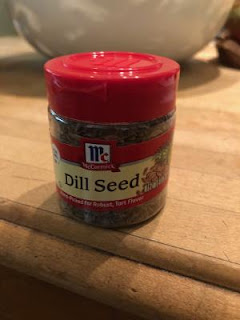 Do you remember when Mr. Moon and I drove down to the coast to take his boat into the shop about two months ago? That's been a pain in his ass ever since. The shop was overwhelmed with boats as it's the only boat motor repair place in the area and that area has a lot of boats in it. Due to that fact or whatever, Mr. Moon was having a horrible time communicating with them about his repairs and today he finally just drove down there to get the boat.
Not a good experience.
Can we just say that a guy who works there offered to beat my husband's ass?
Unsettling, to say the least. And trust me, Glen is like the least prone to violence person I know. The offer was unprovoked. The guy obviously has some serious issues.
But anyway, he has the boat back and he did take it out on Apalachicola River for a little test run and he's home now. And he brought me some dill seeds that he went to two different stores to find. He got them at what we call The Pig in Apalachicola which is actually the Piggly Wiggly and no, I am not making that up.
He is the sweetest man. Lily has also ordered me some with her Walmart curbside pick-up order so I should be back in the dill pickle making business soon.
Just in time. Look what I picked today. 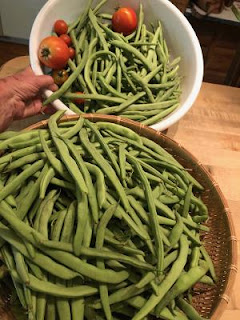 That is one hell of a lot of beans and I'm quite sure I left a lot on the vines. Some are quite obvious. 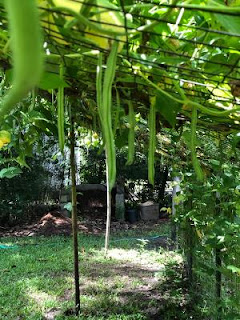 and dangle politely from the trellis but many are not and hide themselves on top of the trellis and behind leaves and I could literally go back and forth, picking the vines several times and not find them all. It's sort of fun but not really in this heat. I only gave it a once-through and back picking because good Lord! That was enough beans for one day. Why anyone plants any type of beans besides rattlesnake beans I do not know. Not only are they the most prolific beans I've ever grown, their growing season is way longer than any other type I've ever planted AND they are as tender and sweet as any bean I've ever tasted. Forget your Kentucky Wonder, your Blue Lake varieties. Get you some rattlesnake beans and plant those.
And next year, remind me to only plant one fence line of them. That is way more than enough.

Another thing I need to be reminded of is NOT TO WALK FOUR MILES IN THIS HEAT! I set out this morning, determined to only do three and when I got to the 1.5 point I thought, "Oh hell. I feel fine," and kept on for another half mile and that was fine too but the last mile on my way home was hell on this planet. I passed a neighbor in about the last quarter of a mile and although I usually stop and chat with him I just couldn't today.
"I'm sorry. I have to keep going," I flung at him as I passed him. "I gotta get home. I'm about to pass out."
I am of the if-you're-dying-walk-faster school of thought.
I felt so rude but I had to do what I had to do.
"Okay," he said. "God bless you!"
"You too," I said over my shoulder.
I have no doubt that the phrase "crazy old white woman" crossed his mind. It certainly crossed mine.

I had one real goal today and that was to straighten and tidy up the table on the back porch where I basically live. Good thing that was my only goal because although I did get that accomplished and a clean tablecloth thrown over the table, I sure didn't do much else.
I baked another loaf of sourdough, this time making up my own damn recipe and it came out very pretty. I also started a pot of our favorite black bean soup but the damn beans must be forty years old because despite the fact that I brought them to a boil, let them soak for a few hours, cooked them for more hours, and finally pressure cooked them for almost an hour, they're still not what I'd call soft but they're simmering as we speak.

I also talked to a very, very dear friend this afternoon for quite awhile. He is one of the most precious people I know and although he is going through some very tough times he made me laugh because he's just so damn profane and funny. And honest. He's the kind of friend who I can go years without talking to but when we do connect, there's absolutely no disconnect. We are bonded throughout eternity.

Once again I am reminded of how incredibly fortunate I am.

One more thing- like Steve Reed and Linda Sue I woke up this morning from the most bizarre house dream I may have ever had. That would not be so shocking because I do have bizarre house dreams but to read that both Linda and Steve had such memorable house dreams too is quite strange.
As we all know, I don't really believe in new age-y magic but I do indeed believe that we humans have senses and abilities that science can't explain because science just doesn't understand them yet.
Yet.
Whatever.
Something was going on.
And I do not dare to postulate what that might be.