In Which Ms. Moon Loses Her Temper 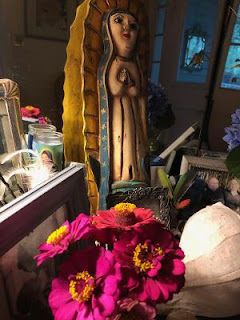 Well, today was a bit different. I learned something about myself that I'm not too proud of.
Or else I am. I don't know. I suppose it just is what it is.

Everything started out fairly normally. I did a few things around here. Packed up some green beans for both May and Jessie and a few jars of pickles for May. Jessie already has some. I went to the Co-op where May's working these days and met Jessie there. When I saw my girl I said, "Turn around." She did and I patted her butt.
"Mama's can do that," she said.
I agreed it was true.
We did a little shopping and giggled and caught up on a few things. Finally we located May and I made her turn around and patted her butt too. I seriously doubt that anyone has gotten covid yet from a pat on a clothed butt. Especially not from a mother.
I know this is silly and maybe even a little creepy too but I can't tell you how wonderful it was, just for a second, to touch those girls, even through their clothes. To make contact with their living, being shapes that came from my own body.
You want to hear something really silly?
I'm tearing up right now, just thinking about it. Lord, how I miss touch.

I found bread flour in bulk and got that and some soybeans and two bags of real, true stone-ground grits. The kind that take an hour to cook and are the only grits worthy to join with shrimp in shrimp-and-grits as far as I'm concerned. I bought some fancy hippie lotion and some Dr. Bronner's citrus-scented hemp soap. Something new for me. I've never even seen that version. It smells delightful. I use diluted Dr. Bronner's in all my foaming soap dispensers. Works great. Cheap too, when you dilute it as much as I do. Says right on the label: "DILUTE, DILUTE, DILUTE!"
And so I do.

We finished our shopping there and reluctantly said good-bye to May. Jessie went off one way, I went another. I had to go to Publix to pick up a prescription and I needed a few things I wasn't going to buy at the Co-op like aluminum foil and parchment paper. I noticed that my brand of coffee was on sale BOGO and while I was searching for bags of my favorite, which is the Italian roast and which must be the favorite of a lot of other people too because they always sell out of that first, I heard a woman behind me addressing a fairly elderly guy who's worked at that Publix forever. He stocks the shelves and Lily told me that he mostly works because his wife died and it gets him out of the house. I've always admired his ability to bend and kneel and get back up. But he's got to be way past seventy and this woman (white, probably in her early fifties, maybe a bit younger) was telling him that he needed to take that mask off every now and then so that he could BREATHE!
She herself must have been having trouble breathing because although she was wearing a mask, as per county order, she was wearing it below her chin.
"They can't force you to wear it," she told him. "You have to be able to breathe."
Not only was she not wearing her mask, she was right up in this man's space. No six-foot distancing for Ms. Breathe. I couldn't believe it. I turned around and said, "Lady! Lady! What are you telling him?"
"I'm just saying that it's his right to take his mask off and breathe. That people can't breathe properly when they're wearing a mask. That it's unhealthy. That they can't force him to wear it."
Now. Actually, Publix employees ARE required to wear masks. For their entire shifts. Does anyone like it? Not especially but the smart ones know why they're wearing it and the ones who aren't so smart still want their jobs.
I got ON this woman. I told her that it was ridiculous to believe you can't breathe wearing a mask and that you don't wear the mask to protect yourself, you wear it to protect others.
"You're wearing yours to protect YOU!" she said.
Stupid AND not psychic.
"How do you think surgeons do it?" I asked her.
"I don't know," she said. "They're a lot younger than us." Then she thought about that. "Well, not all of them."
"They manage just fine wearing masks," I said. "And why do you think they wear them?"
"Because they're forced to!" she sang out triumphantly.
"And why are they forced to?" I asked her and then answered my own damn question- "For their patients' safety."
She acknowledged that this was true but couldn't somehow link that fact to her own "facts" about needing to breathe and masks not really protecting anyone.
And here's where I learned something about myself. At this point I was on fire. This whole argument in the middle of Publix felt so fucking GOOD! My anger felt clean and hot and I wanted to slay her with my words. And I realized that I could easily get crazed enough in my (to me, anyway) righteous anger to actually smack her. And I stopped right there.
Except for yelling at her, "Get a clue! Get a clue!"
And I grabbed the two bags of Italian roast I could find, threw them in my cart and stalked off.
I really showed her, didn't I?
No. No I didn't. She's probably telling someone right now about the crazy old hippie in Publix trying to tell HER about masks. And about how stupid and what a sheep I am.
It reminded me of the time I went back to the dump depot and told off the old man who worked there for saying racist things to a young woman there who, unbeknownst to him, had an adopted African American father. My anger felt hot and clean then, too, even surrounded by the stink and flies of the rotting trash of Lloyd. I could have screamed at that old man. Again, I did not. But I sure got close.

And, like with the woman in Publix, I seriously doubt that the things I said to him that day changed his thinking or outlook one bit. I was doing it for my own sense of self-righteousness. To appease my own anger. The girl I was defending was nowhere around.

Here's another thing I keep thinking about- how that man in Publix whom the woman had been advising to take his mask off and breathe, just stood there, wordless as our words ricocheted around him. At the very least, I was rude to break into a conversation that did not involve me even though yes, I rationalized that it very much did involve me and everyone else in the store.
And I don't even know if that was the "right" way to think or not. Is there a right way? I don't know and I may never know but I sure didn't take a minute to think about it before I lit into the woman.
And honestly, I wish I'd given her hell for standing, maskless, so close to that man.

So that's my little story. Whoo-hoo! I had a small, old white woman tantrum in public, in Publix today. I'm glad Lily wasn't there.

Another day, another reason to hate Trump. I don't have one specifically in mind but I'm sure there are plenty. Another day to watch the covid numbers soar. Another day to think about all the people who are bound and determined to go out and celebrate their freedom in public places in completely unsafe ways. Another day to watch people completely ignore the experts, the doctors, the disease control specialists and to make up their minds about the situation from Fox news and QAnon websites.

When I looked for aluminum foil at Publix they had the short rolls, but not the long ones. I wonder if people bought them all up to make their tinfoil hats with. Because there sure are a lot of people who must be wearing them.
Wish they'd wear masks too.