Mosquitoes, Mommies, Miracles, And So Forth

Yesterday when Lily and the kids got to the river, Owen immediately said, "Do you want to hear about the horrible thing that happened last night?"
Well of course I did. Everyone appeared to still have all of their limbs so how horrible could it have been?
Turns out that there had been a little struggle over Baby Alive whose head had come off. I suppose it had been somewhat traumatic when it happened but Magnolia was beyond thrilled because she was going to get a new one! Her name is Lily! Turns out that each Baby Alive has her own name and the one Maggie had picked out was indeed a Lily. Lily was expected to arrive via Amazon today.

I got a text from Lily while I was walking this morning (only three miles, thank you very much) and they were going to the farmer's market in Monticello and would I like for them to drop off the dill she'd bought for me? I said yes, and if they had any peaches at the market that smelled good, to get me a few.
So awhile later here came Lily and the dill and the peaches as well as some chanterelle mushrooms that either she or Owen had picked and we all sat out in the back yard and Mr. Moon fired up some sort of battery-operated mosquito repellant thing which did finally start working which was good because despite spraying with the "natural" spray, we were all getting bit like crazy and between that and the heat I felt as if I might go insane. Before the device began to be effective, we all sat and slapped and scratched except for Mr. Moon who had prudently sprayed with the DEET spray hours earlier because he was working on the porch and outside. I really cannot describe the special torture of this heat combined with the humidity and mosquitoes. It's a sort of living hell right here on earth but we were soon not nearly as inundated by the bugs and it was almost tolerable sitting in the shade where we all talked and Magnolia kept running back to the chicken coop to see the baby. She tried her best to catch and hold the baby but Dottie wasn't having that.
But it was a sweet time, just being with Lily and the kids and Maggie kept talking about her Baby Alive when she wasn't trying to catch the living baby chick and Mr. Moon told her that things can sometimes come later than we'd wish but a few hours after they left, I got this picture. 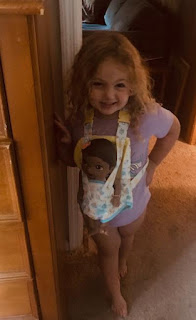 Lily did indeed appear at the doorstep today and as you can see, Magnolia is happy. Lily (her mother, Lily, that is) told Maggie that she is a good mommy and Magnolia said, "Yea. I want to be a good mommy like you!"
Could anything be sweeter?
I have a feeling that whatever Magnolia decides to do when she grows up, if being a mother is part of that, she will be a very good one.

I got almost nothing done on August's dress this afternoon. I decided to rip out part of what I'd done yesterday and that took me forever. I had wanted to put French seams in the dress because...well, I don't know. It looks better and there are fewer raw edges inside to irritate a child's skin. But it just didn't work for this particular seam which had a slit at the top of it so that it will fit over August's head and what I'd tried to do to make it neat and tidy had only made it look sloppy. So. The seam ripper came out and the stitches came out and I finally fixed up that part and proceeded to sew on a button and make a loop to fasten the button with and now I hate the way the loop looks.
Hate it.
At this rate, the child will be lucky if he ever gets the dress, much less decorated with any sort of sequins or rick-rack. I don't even know if I have any rick-rack, much less sequins. I haven't looked. What is WRONG with me?
Even supper looks abysmal. Last night's peppers were delicious and I decided to use the leftover mixture of venison and tomatoes and rice as a base for a chili but all it resembles now is a mushy mess. I made a loaf of sourdough, at least, and that looks good. I've been fooling around with how I make it and tonight's experiment has both milk and a tiny amount of sugar in it. I loved the way the dough felt and the way it rose but the proof will be in the tasting.
Oh, it'll be fine. Almost anything with butter on it is fine.

Meanwhile, Mr. Moon's work on the back porch is beautiful. He fixed the screens where they were out and replaced a few boards. The bad news is that I will no longer be getting visits from Liberace and his dame de jour but the good news is that I won't be cleaning up chicken poop on the porch. Also- the mosquitoes will have a much harder time gaining access to my blood.

It's summer time in Florida and let's face it- it's pretty miserable here. But I will say that all of the rain we've gotten has made everything as green as it can be so at least there's that.
I got to see three of my grandchildren and one of my children today and that of course is a fine thing.
A cardinal couple just alit on two chairs in the back yard and the crickets are singing their sundown song, loud and sure of everything. The solo artists begin each verse, the rest of the choir joining in for the rhythmic chorus. If I just stop and pay attention, the swelling and fade of it is almost too much to bear. Like with so many things, the song of the crickets is such a part of my life that I barely hear them any more which does not make them one bit less miraculous.
The miracle is all around me whether I pay attention or not.
I want to try and pay more attention. Who wants to go through life missing the miracles?

I guess I'll go make a salad or something.