Maurice The Nurse, Plus Other Things 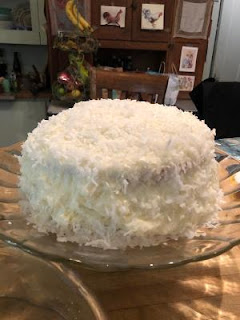 So, as you can see, I got a package from Fed Ex this afternoon.
And that is the coconut cake that Mr. Moon made for me. Is it not glorious? It tastes even better than it looks, believe it or not.
You know what else is glorious?
NOT HAVING TO TYPE A BLOG POST ON MY PHONE!
I mean, seriously.
Also, being able to post pictures.
I'm sort of half-assing it here because I haven't had all my familiars transferred from my old MacBook to this one but I've figured out enough to check my email and Facebook and other blogs and okay, yeah, go to Youtube and watch one of my favorite videos of all times which I may repost here for your viewing pleasure even though I've posted it, uh, several times before. I say "may" because suddenly I've been thrown into new Blogger and I'm just trying to figure that out. So far, sorta good.
So. Last night was rather extraordinary and no, it wasn't the drugs because I only took Ibuprofen. But Maurice slept with me all night long which isn't that odd because The Chair is her territory as I may have said before. But she was so attentive. It seemed to me that she sat closest to where my pain was and she spent a lot of time grooming my hand, licking it until I thought she'd sandpaper the skin off. That could have been annoying but it was more comforting to me. Another thing she did was when I was doing a little deep breathing because I had a small muscle spasm (I guess) she got right up in my face, put her mouth on my chin and held it there until I quit breathing like that. It was like she was not having that at all. I quit with the Lamaze breathing and she settled back down. And then, another time I stirred and woke up and she immediately got up and again got in my face and this time she kissed me on the lips. Which she has done before but not for a very long time. Right on the lips.
Cat lips are quite thin. Have you ever noticed that?
So she was my comfort all night long, my nurse cat. This scrappy, scabbed-up slip of a cat whom Maggie calls "Scratch" because she'll scratch a human as fast as she'll go for a flea, took care of one of her humans and it was so nice to feel her caring in the darkness. 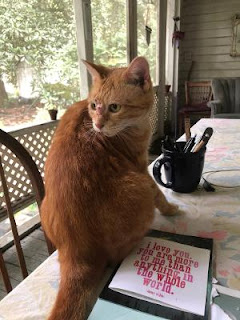 And hey- she might not have cared a bit about me. She might have just been- I don't know- what? Restless and being bossy? Whatever, I appreciated her and when I woke up this morning I felt much better.
In fact, it's been almost miraculous how much better I've felt both in body and in spirit, especially as the day has progressed. And I'm sure that getting this new beautiful toy and tool has helped tremendously.
I always love opening an Apple product. The wrappings are as elegant as the machine itself. Works of art in their own way. Once you get it out of the Fed Ex box there are definitely no cutting tools required. A tab here slips off a protective sleeve. The box it's in has a place for each component to nestle perfectly.
Beautiful engineering of the simplest sort.
And then, you lift the cover and there you go- the Apple appears, the MacBook awakes, and in a few seconds you are led through the setting-up process.
Now. Let me admit right here that I had to call tech support. I could not get the trackpad to respond to my taps. Just couldn't do it. I got stuck on the page where I had to select my country. And I was frustrated. So I called the number and got put on hold, of course, but finally someone named Shaun or Shawn or whatever answered and he was a jewel and I told him that yes, I was old, and also that I'd been using Macs since the Performa which was the worst Mac ever made, I'm sure, and he didn't even laugh at me and he didn't laugh when I had to give him my e-mail address which is at aol and he assured me that he still gets people who have hotmail.
And here's what the problem was and he didn't laugh at me when I figured it out- I was not tapping on the trackpad properly. You can change how you want your trackpad to respond and to what sort of touch and the way it comes from the factory is quite different than the way I'd had my old one set up. It wanted a mash-in-the-middle rather than a quick tap.
So once I figured that out all went swimmingly and here I am.
I wasn't even that embarrassed. I mean- I was just so happy to get it up and working.
There are so many new features on this thing and of course I don't have a clue about most of them and will never USE most of them but we are so fixated on bigger and better, aren't we?
I asked the tech where in the country he was and he told me California. I asked him how things were there and he went into a very long speech about wearing masks and staying home. As in- why isn't everyone doing those things? I wanted to say, "You're preaching to the choir here, boy!" but I just told him that being from Florida I felt his pain.
And I do.
I see that Herman Cain has died from Covid and was diagnosed less than two weeks after attending Trump's Tulsa rally. He had tweeted that masks would not be required at the July 4th Mount Rushmore event, going so far as to say, "People are fed up!"
So.
Yeah.
And I also see that Trump is testing the waters on the idea that the election should be postponed.
Well, we knew that would happen.
I haven't listened to Obama's eulogy for John Lewis but I will. We were so incredibly fortunate to have that man as our president for two terms. It seems like a dream now, doesn't it? As this year just gets harder and weirder and more fucked up, it's almost impossible to believe that less than four years ago things were so completely different.
All right. I've written too much already. And I've hit a wall and need to go crawl back into my nest.
Here's another picture. 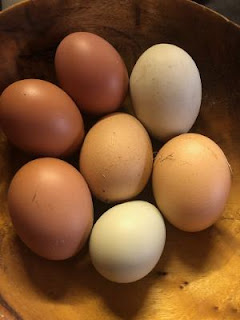 See those beautiful cocoa-dark eggs? And the little greenish one in front? It's hard to tell but it's quite small. It's not unusual at all for a hen to lay smaller eggs at first.
Which I am quite certain the young ladies appreciate. As best they can, anyway.
ENOUGH, ENOUGH, ENOUGH!
See you tomorrow.
Love...Ms. Moon
P.S. There is nothing about this video I do not love.
Posted by Ms. Moon at 6:52 PM