It Is The Season Of The Bean 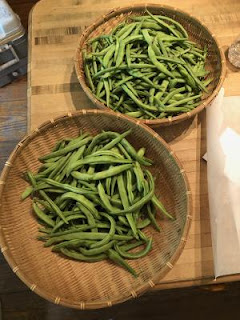 Today's haul.
Mr. Moon and I were sitting in the Glen Den watching some TV while I snapped green beans and he shelled field peas and he described to me how he's been fertilizing the beans.
"Maybe it's time to stop that now," I said.

I'm slowly filling up the garage freezer with quart bags of the beans and it truly is nice to know that this fall and winter I'll have green beans for suppers, soups, stews. I'm not really complaining but it does seem as if my life is mostly defined by these beans right now, picking, snapping, freezing, and cooking them.

This morning I woke up in despair. Just pure despair. Last night I made the huge mistake of getting into it (gently) with a girl I know on Facebook who had posted something about how 99.5% of people who get covid survive and how "they" are using the virus to deny us our civil rights and wreck our economy. That it was created in a lab in North Carolina and then shipped to Wuhan and that Dr. Fauci was in on it and is somehow benefiting financially (I guess) from all this.
I've known this woman literally from the moment of her birth and I had no idea that her thinking goes along these paths. And I used to be good friends with her parents. They certainly, at that time at least, didn't cling to conspiracy theories.
And I suppose that despite knowing full well that even trying to begin to untangle such a web of faulty thinking, of determined ignoring of the facts and science was a fool's errand, I thought that perhaps maybe...what? That I could make her see the light?
Yeah. No.
All it served to do was upset me. To her, the things she thinks are PROVEN FACTS and that is that.
But just knowing that even people whom I know to be intelligent and raised by liberal parents can somehow slip into the that river of denial and conspiracy depressed the living fuck out of me.
I should have just thought, "Bless her heart," and moved on.

But I just felt so overwhelmed this morning. Like it's all too much. Too damn much. Everything is out of balance, sliding from this side of the ship to the other in the storm-tossed seas we're trying and failing to navigate. But there's nothing to be done except to try and stay upright, to attend to that which needs attending.
I guess.
I realized that today was going to be one of those days where I could not ask very much of myself. And I didn't. I got some things done but nothing extra, certainly nothing extraordinary.

Like a sweet blessing, Lis called this morning and told me to go to the post office which I did. She had sent a box filled with lovely treats. Dresses, mostly, that she'd cleaned out of her closet, soft and cool and pretty and a very welcome relief from my overalls. Also some delicious looking fruit syrups for Mr. Moon and some antique fabric for whatever I might want to make with it. She also sent yards of old tulle that is meant for Hank and Rachel's wedding whenever that happens. A tropical blouse, a skirt, a card for Mr. Moon's birthday.
In other words- a treasure box.
I'm wearing one of the dresses now. April Cornell with buttons down the front, pretty detail on the bodice. It feels like wearing a nightgown. A really lovely comfortable nightgown with pockets.
I swear- over half of what's in my closet came from Lis. She takes care of me. I love her so.

I started a loaf of sourdough last night and instead of baking it in my dutch oven as I always do, I baked this loaf on a baking stone with a pan of water in the oven to provide steam. We shall see how it tastes but it is a fine-looking thing. I think we shall call it "artisanal." 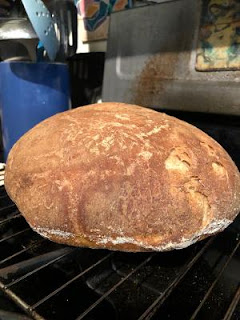 Jessie brought sandwiches yesterday that she'd made from the starter I gave her and her bread looked better than mine. Hard for a mama to admit but true. I asked August if he'd like a piece of my bread and he said that he would. I sliced him a piece and handed it to him and he said, "Ummm, it would be better if you put butter on it and heated it up."
And so I did.
And of course he's right. Bread is always better heated up with butter on it. Even a four-year old knows that.

Dottie and Dearie are safe in their little coop. Dottie is taking such good care of that child all day, leading her about the yard, the chick running to keep up with her, peeping and occasionally trying out her tiny still-downy wings. Darla continues to sit on the nest.
I still feel overwhelmed and somewhat in despair but I am doing my best to keep my sea legs beneath me, to find balance in this strange storm. I never feel as if I am succeeding but how does anyone do that these days?
At least I am wearing a pretty dress as I make my way drunkenly across the deck of this rolling ship.
And we'll be having a warm green bean salad with our supper tonight. Oddly, they still taste so very good to me.