In Which I Do Not Buy Dill 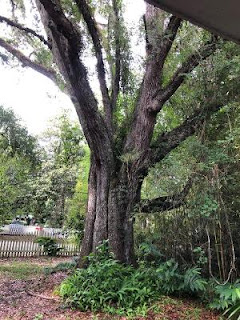 Well, harumph. I actually made the effort to go to the Winn Dixie in Monticello today to search for dill seeds. The Winn Dixie has always been my go-to place for dill seeds as Publix just doesn't carry them. I do not know why. There was a place for dill seeds at the Winn Dixie but it was bereft of any little jars. I used up my last jar when I made dills on Sunday. Or was it Saturday? I'd stashed a bunch of them in the freezer year before last, I think, and they were still fine but now they are gone. Not really gone, just used. One cannot drain the old seeds off new pickles and reuse them, so essentially, yes, gone.

I also went to the Tractor Supply store to buy more chicken feed and also some chick feed because once again, being human, I just could not leave Dottie alone up there in the nest with her child with no source of food and the little one is a sitting duck (or, sitting chick, as it were) for anything that might get into the hen house, be it snake or possum or coon. And I was getting worried. Generally, the eggs all hatch at about the same time so that Mama can take them all off foraging when they are just a day old. I'm not sure at all that Dottie's other egg is going to hatch but she won't get off it until it does or I throw it away so poor little Bebe was just hanging out and getting hungrier by the minute. I assume.
I filled up a waterer and put chick feed in a feeder and put those in the little chick cage and moved Dottie and the baby AND the egg in with them. I put fresh hay down for them. Dottie did not like being moved but once I set her down and she saw her baby and knew her egg was there she settled right in to eating and drinking and I'm sure that she taught her little one how to do it too so they are safe and Dottie can continue to sit on her egg and they won't die of starvation or dehydration.

I just went out to check on the mother and child and found the egg rolled off into the dirt but Dottie and her baby seem just fine. 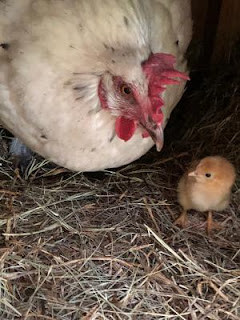 I think we should just go ahead and name the little one Dearie because we do not at present have a Dearie and Gibson loves that name. So. There you go. Dottie and Dearie. It may well be that Dottie has given up on the egg. Again, I have to say that I have no more idea how these things are determined by the mother than I understand quarks but luckily, I don't have to. Darla is still sitting on her egg or eggs, patient and still as the Sphinx.

I was surprised to see that most of the people in the Winn Dixie and the Tractor Supply were wearing masks. Pleasantly surprised. I was also surprised that the Tractor Supply still has chicks. I did not buy any although I will say that I was tempted, knowing that I could put them into Dottie's capable, uh, claws for raising. But there's always the chance she would not accept them and then I'd be stuck and besides that- I already have seventeen chickens and one chick. More than enough poultry riches for me.

While I was outside I went and checked on my fig tree. As every year, it has made quite a few figs but they are so tiny! Some are growing ripe, though. 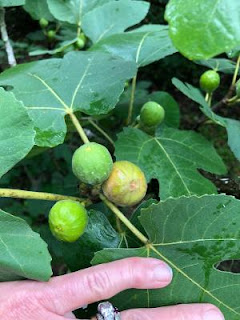 If the squirrels and crows leave me enough I would love to make fig preserves. They are so good.
We shall see.
As with everything. Eventually.

It rained this afternoon and it is nicely cooled down outside. Unfortunately, the mosquitoes are out in force. I bought some "all natural" bug spray at Costco yesterday, mainly because that's what they had and I didn't want to go to another store but I haven't really given it a big test yet. I did use it this morning before I went out to tend the chickens and I have to say I didn't get bit but I was moving fast and they were certainly still swarming me. At the very least, it smells nicely of citronella and other herbs and spices. The smell of the citronella takes me right back to my summers when we rented that tiny little apartment on St. George Island and I'd buy citronella candles at the Dollar Store to burn in our "yard" made of rocks and sandspurs.
Oh, how magical those summers were.

Off to make supper, as always. Tonight's menu is going to feature a ROASTED CHICKEN! Yes. I am the world's biggest hypocrite. At least I buy the ones who were supposedly treated right during their short lifetimes.
I have my doubts about that but it's the least I can do.
Meanwhile, my own chicks are getting ready for bed. I can see Pinto, Pecky, and Patty up on the fence, enjoying their last hour of sunlight.

P.S. Mr. Moon just told me that he sprayed himself with the new nicely scented bug spray and he (and I quote) "Feels like a pincushion."
Time to buy more Deet.
Posted by Ms. Moon at 6:46 PM