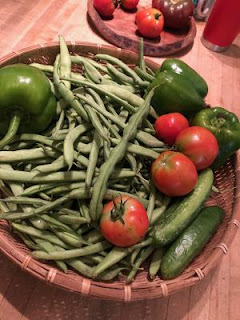 Y'all getting tired of seeing pictures of baskets full of beans?
Sorry. That's my life right now.
When I woke up it was raining and it rained most of the morning. I texted the kids and said, "Would be a great day to be at the island with cards and books and snoozes. Am I right?"
Hank and Rachel agreed. Mr. Moon said that he can't wait to get over there and fix it up nice so I can come visit. "Are you planning to move there?" I asked him.
"Maybe," he said. "But I'll carry you in my pocket."
He's a funny guy.

I decided that today would be perfect to work on August's dress but by the time I'd done my regular chores (cue theme song from Lassie and imagine me as June Lockhart) and picked those beans during a break in the rain and picked up and did a few of the little things I'd been putting off, it was getting on to afternoon. I sat down and started sewing, screwed up my very first seam and it went just about like that for the next few hours.

I'm a little bit angry today and I'll tell you why- if we stupid Americans had followed the lead of the more sensible countries and stayed on lock-down and followed the rules, we wouldn't be where we are right now. I wouldn't have to be afraid to kiss my grandchildren's backs.
Who would have ever thought we'd be living in a time where we had to make decisions like whether it was worth the risk to hug our loved ones?
I talked to Lis today and we discussed this for quite awhile. I don't know what I'd do without my Lis-chats. She keeps my spirits up and we laugh and compare pandemic stories and cooking ideas and garden news and current projects. She and Lon are celebrating their 41st wedding anniversary today. Remember last year when we went to St. Augustine to celebrate their fortieth? They played at Creekside and there was a cake and many, many people there to celebrate. It was joyous.
And now we can't begin to imagine attending a celebration like that. That was a different time, a different world.
So much has changed.
And change is okay. Change can be great. And except for the fact that my children and grandchildren all pose potential threats to me and their grandfather and vice versa, I'm good with this change. But that's a selfish way to look at it. How many people who own small businesses, who have spent their LIVES trying to make those businesses succeed and thrive are now being forced to shut down? Or have already been? And how many of their employees are out of work?
A hell of a lot.
Let's face it- Walmart ain't going nowhere.
And here we are with a president so butt-stupid that he thinks he's the smartest man on the planet who hasn't had the slightest idea how to deal with this disease and in fact, has ignored the advice of people who are experts to the point where he is personally responsible for the deaths of so many. And the crashing of the economy.
And our very own Florida education commissioner has announced that this fall all schools must reopen while cases are still increasing and there have been over 11,000 diagnosed cases of Covid in children here in the state.
I just looked at a chart which says that six of the top ten metro-areas in the country with the fastest growth of new cases are in Florida. Six!
Oh well. Trump has way too much to do defending confederate statues and the police state to have any time to worry about the corona virus.
You know what? He's such a sick fuck that it hardly seems fair to point the finger at him anymore. And to everyone who says that we should never say his name I say this- By not saying his name we are attributing some sort of magical powers to that action which is ridiculous. His name is Donald Trump. He and his name will go down in history as the worst president and one of the worst things (if not THE worst) that ever happened in US history. Given enough time he'll be one of the worst things ever to have happened in world history.

Please- all the gods that be in heaven and on earth- let's not let that happen.

Y'all hang in there and stay safe. However long it takes. Stay safe.