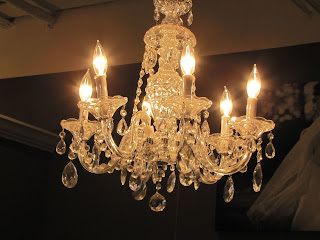 Jessie and Vergil just pulled out of the driveway and Mr. Moon and I stood there and waved them off and did the turkey call thing that Owen has somehow made a ritual which is where we all gobble like turkeys and I don't know why he wants us to do that but he does so we do it and we did it just now, maybe another way to keep the babies safe when they leave us.

"Good job," I told Mr. Moon when they pulled onto the road which is what Owen tells us if we have done the gobbling correctly. "Good job."

I cried because of course I cry. The world is moving so fast, there is no stopping it. Jessie was three years old yesterday and my back-pocket baby, riding on my hip in a sling until she was just too heavy but that took a long time and then she followed me around for years and years and now she comes and she goes and that's the way it should be and she has a beautiful life and a wonderful fella and a great job and she's getting married in April and yesterday we went and found her dress.

It was such a wonderful day. We laughed so much. We are an earthy family, to say the least and phrases like "good boob presentation" abounded. I will show you a few pictures of Jessie in dresses but not THE dress because that wouldn't be right or fair and Vergil is not allowed to see THE dress until THE day and that's all there is to it. 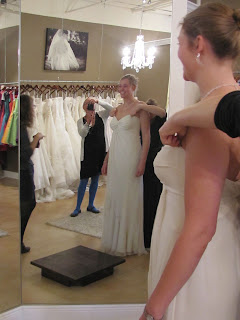 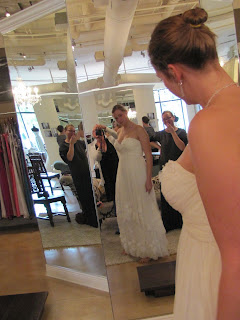 but none of them were exactly right.  We did actually find a dress that we all agreed was so gorgeous, so beautiful 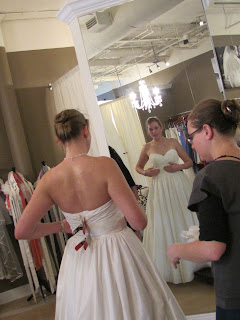 but the sample dress, which was the one they had, not only had stains on it but also missing buttons and stray threads and it could have worked, we could have gotten it all taken care of but it still cost a lot of money and yes, they could have ordered a new one but that would have been a lot more money and we didn't pull the trigger. If Mr. Moon had been there, he would have bargained that dress down to what it was really worth (and how DO you judge a wedding dress's worth?) but he wasn't and we girls are meek and agreeable and so we went on to lunch to think about it and we had another appointment later on in the afternoon at another place. 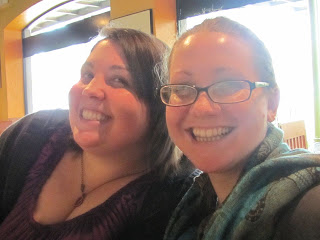 Lily and May. Sweet sisters. 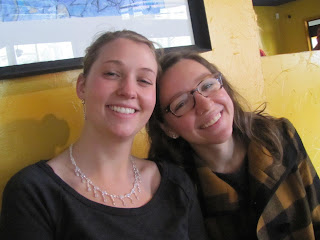 Jessie and Melissa. Best friends since forever and ever.

There was wine and there were salads and cake and we kept calling Jessie the Bridey (or maybe that was just me) and it was so much fun. After lunch we still had plenty of time and we went to a fancy shoppe next door and I blatantly asked if they had a sale rack and no they did not but I bought a dress anyway, and I can't remember the last time I bought a dress, either new or used. It is the opposite of a bride dress. Black and t-shirty and so forth and unadorned. "You look so cute in that dress," the lady said and I said, "To the extent to which I can be cute at this point in my life."
Well.

Then we had an entire other chapter of shopping at the hippie store and the Old Navy store and then on to David's Bridal which was hustling and bustling and we were giddy with it all by then, giddy on wine and coffee and cake and each other and the whipped cream froth of the dresses.
We made Jessie try on a ballerina costume of a princess wedding gown just for fun. 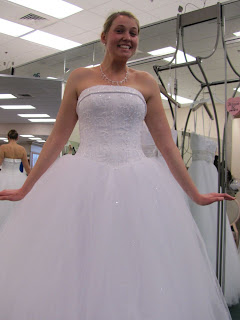 It was so silly.
And I made a joke about "boning" which the saleslady had mentioned in the context of, well, a bra but it made us all laugh so hard and I even blushed and then she brought out THE dress and we all sighed and moaned and it was wonderful.
Yes. It was the one. We all agreed. You will too, when you see it in April.
I can't even imagine what Vergil is going to think when he sees his bride walk down the aisle (or the path, in this case) in this dress. But I will tell you, it is perfect and there are going to be tears. 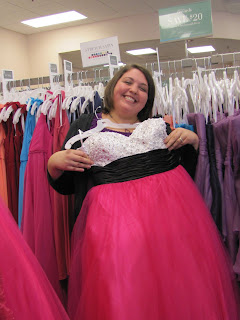 Hot pink, black and sparkly on top. May said she'd wear it if Lily wanted her to.
I do not think they will choose that one, though.
May showed us one that had cut-outs on the side and she said, "This is what you'd wear if you really did want to sleep with one of the groomsmen."
Earthy. I tell you we are earthy.

When it came time to pay for the dress the lady told us that she had enjoyed us and I'm sure she did. She put the dress carefully into a giant bag along with the Preservation Kit box which the dress will be stored in after the wedding, after it is cleaned and steamed and made beautiful again after all of the dancing and frivolity which is no doubt going to occur. They "sugar" the dress which will keep it pristine for thirty years. Or so they say. We all boggled at that- sugar, really?- but the lady assured us that no sugar is actually involved. Whatever. We paid the extra money and who knows? Maybe someday a daughter of Jessie's and Vergil's will want to be married in the dress. And if so, it will be ready.

After the shopping we just couldn't quite bear to part yet so we got coffee and then we went back to Lily's, at least Lily and Jessie and I did and the boys and men had been together all day, making beer and eating barbecue and playing. Owen delighted his grandfather beyond words by telling him, right out of the blue, "Boppy, I love you." I showed Owen my blue-stockinged legs and asked him what he thought about them. He rubbed my calf thoughtfully and said, "Kind of silly." Haha! He's right. Blue legs are silly. I got to meet Bubba and Creature or, Daddy and Owen, depending, and yes, they are darling little mice and no, I did not care to hold them.

We came back to the house, Jessie and Vergil and Mr. Moon and I and got dressed up and went back to town and had supper at Kool Beanz but before we left, I made Jessie and Vergil dance so I could take a picture. They are thinking of taking lessons before the wedding, which I find charming. Here they are, practicing a dip. 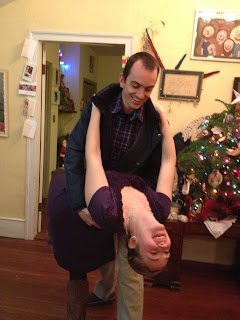 They dance. They love.
They are so beautiful and how can my baby be old enough to get married in a beautiful gown?
I do not know, but she is.

And they're on their way home and I'm going to go to town soon to stay with the little boys for awhile and then I'm going to go pick up Hank and bring him home because he's been sick for too long and he needs to get out of that tiny, cold apartment and come and stay with us so he can be warm and I can feed him leftover chicken and dumplings and get him well. He is my baby too.
And Buster the dog keeps throwing up and the laundry is running and life keeps on going and going and Mr. Moon is sneezing and it's clear and chilly outside and Jessie has a dress and she shall wear it in April.

That's it. That's all except for everything else and I am grateful for all of it except for the parts that I am not grateful for and I'm sorry, I'm not one of those people who says, "It's all good," because it ISN'T all good, not dog vomit and not being sick and not worry and not anxiety but a lot of it, oh yes. A lot of it is very, very good and there's so much of that.