Mr. Moon asked me what I wanted for Christmas this morning.
I almost said, "Nah, you done fucked that shit up," meaning, of course, that we're not going to Mexico for Christmas but I thought better of it and just continued to make the oatmeal and said, "Oh, honey. I don't know."
He's so sweet, that man. But I have no idea what I want for Christmas although I have ordered myself two presents. One is the traditional Virgin of Guadalupe calendar which I order every year and the other is the book Call The Midwife. So honestly, I'm covered.

I've gotten Jason a token gift and last night I went nuts and ordered Gibson one of these: 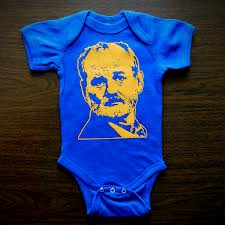 Just what every ten-month old needs and wants, right? To tell you the truth, Gibson would be thrilled just to get a graham cracker for Christmas. I'm sort of going about this all wrong.

The kids really all just want money for Christmas. Money is good. Money is easy. But money is boring to unwrap on Christmas morning. I have to get those people SOMETHING. And then...wrap whatever I get them. I guess.
Oh god.
I wish they made Bill Murray onesies for adults.

I'm not sure why I have such a hard time buying presents for people but I do. I was thinking about this the other night and it might have something to do with my mother. (Surprise!) I don't think I ever got her a present that she truly liked. I remember when she turned fifty and I thought that deserved a truly nice gift so I asked my brothers if they'd like to chip in on something and they said they would and I went out and bought her a small band with emeralds (her birthstone) and diamonds in it. I don't think she cared one damn thing for that ring. I don't recall ever seeing her wear it. She's given it to Jessie who does wear it sometimes. One of the stones fell out and Jessie got it replaced. I think.
I'd really like to buy all my kids a house for Christmas. One apiece. That would be awesome. Lily already has a house but it's sort of small so I'm sure she and Jason would appreciate a larger one.
I'll run that by Mr. Moon and see if he likes the idea.

Some people are just gifted at giving. My friend Lynn was. She'd find the best things. Not expensive things- she never had any money- just GOOD things. She bought me a little tiny set of glass bowls made in France once. The smallest one is about the size of one of Baby's eggs and the biggest one is about large enough to use for a cereal bowl. I use those bowls all the time and I cherish them. I think she got them at a yard sale. But I don't have the gift-giving gene. Nor the gift-receiving gene if you want to know the truth. It wracks my soul to think of someone going out and pondering what to buy for me. I just want to cry and say, "Oh please. Don't bother."
Like that.

I do want to make Christmas Eve supper for my babies. I didn't make Thanksgiving so I really want to do this. Make the traditional chicken salad that Mr. Moon's mama always made with the red and green grapes and pecans on top of it. I'd love to cook a ham and maybe I just will. And I already bought a Costco fruitcake and do not give me any shit about fruitcake. I love fruitcake and sometimes I make them but not this year. Two years ago I bought one of the Costco ones and it was so good that May and I went crazy eating it to the point where Lily got disturbed. May and I are generally fairly circumspect when it comes to eating treats but we were shoveling that cake down our gullets. Fruit and nuts were flying as we chomped it with our big American teeth. Lily finally got up and put the cake away. She almost cried, it was so disturbing. I am looking forward to doing that again.

Well, I suppose I should quit talking about this shit and go out and actually do something. The sky is so gray that if we lived up north I'd be predicting snow but we don't so I won't. It might rain tomorrow. The chickens are scratching around the back yard and I haven't seen Fancy today. Maybe he needs to bring Baby a present, see if that would help her heart soften towards him. I bet if he took her to Mexico she'd dance with him.
If you know what I'm saying.

Or maybe he could take her to Mexico next year. Sometimes a hen just needs a little something-something to look forward to. Presents are nice but the Caribbean is nicer.

Why does my porch smell like dog shit? If Mr. Moon wants to know what I REALLY want for Christmas, here it is: KILL THE DOGS!

Isn't it nice that I'm getting into the Christmas Spirit this year?
I think so.