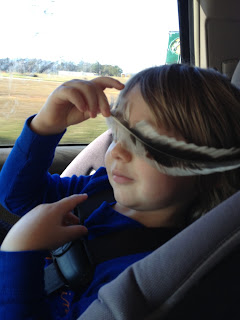 The boys were so happy this morning when I got to their house and we buckled up in the car and Owen insisted I crawl in between the car seats and sit in back with him and so I did and we went to Costco and had tasty treats of hummus and chicken salad but then the shit hit the fan, the pooch was completely screwed when Owen discovered, in the back of the van, one of his Christmas presents.
Oh Lord. There was weeping and wailing and gnashing of teeth and Lily had to completely rewrite the mythology of Santa Claus and how he works and in the middle of it all, I heard Mr. Moon's voice and somehow I had purse-Face Timed him and so there he was in the middle of it all, the wailing and weeping and gnashing of teeth, and Gibson beamed like a gentle sun, unmoved and undisturbed by his brother's sorrow and pain. 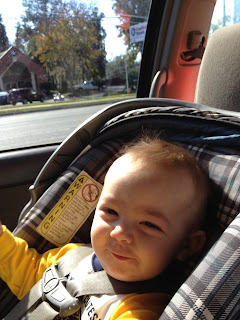 It's always an adventure.

We finally got Owen to calm down a little bit and right next door to the restaurant where we wanted to eat our lunch, there is the best Goodwill Bookstore in the entire world. They also sell some toys and so we took Owen and Gibson in there and we let Owen pick out a toy and he picked out a Lincoln Log farm set which charmed my heart and he was happy again. 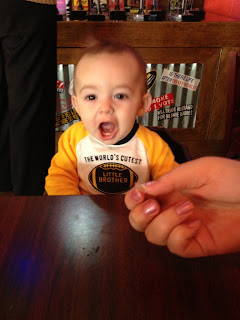 We had our lunch and Gibson did his imitation of a baby bird, his beak wide open to any morsel or tidbit that we could offer, a bean, a tiny piece of chicken, a tomato, a torn-off piece of tortilla, some applesauce. He almost scored a tiny cup of hot sauce but we saved the day, we got it away from him right before he could bring it to his mouth and Lily licked his fingers clean.

When it was time to go, Owen pushed his highchair over to where they go but couldn't quite get it into the proper position and a man helped him. Owen told him thanks and then he said, "I a little small."
Really. He said that. He wanted to show everyone his Lincoln Logs and I, with my grandmother heart, wished that he could have. That every one in that restaurant could have admired and discussed those Lincoln Logs with him. But no, that is not the way things are done, and we left and went home and we built a Lincoln Log farm and he got out his farm- and woodland-animals and his dinosaurs and the cows were corralled together, the horse and the bear shared space. And Gibson chewed on the Lincoln Logs which generations of babies have done and all was well.

Later, after Gibson had gone down for a nap, I talked Owen into letting me read him a book. 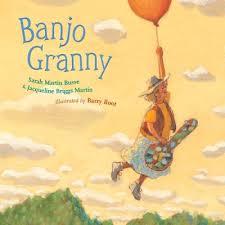 It was Banjo Granny, a book that Vergil and Jessie had gotten him and it's about a banjo-playing grandmother who is trying to get to her grandson who is named...Owen and we stretched across his parent's big bed and he laid on my back while I read to him and it felt like I had done that a million times before, read on a bed on my belly with a child on my back because I have and he actually listened to the story and he hugged me and hugged me so fiercely as I read to him. I truly think the story made sense to him- a grandmother's love and a little boy who is waiting to see that loving grandmother and finally, when he was hugging me so hard I thought he might leave marks, he said, "You the BEST sister in the whole world!" which cracked me up so much.
Oh, that boy. That boy, that boy, that precious boy.
And we talked about the book and how the grandmother had crossed a river and a mountain and a desert because she loved that Owen boy so much with her grandmother heart which was set on seeing him. And he knew. He knew exactly what that meant.

And part of me thinks, well, I have done my job on this earth. I will never learn to play the banjo and I will never be a doctor or a lawyer or The Secretary of State or a win The Miss America contest or the Nobel Peace Prize or even the Pillsbury Bake-Off but my three-year old grandson knows that his grandmother would cross a river, a mountain, a desert because her grandmother heart was set on seeing him.

And okay, he did tell me to stop dancing in the Costco which I was doing behind Lily's back because I know it would have embarrassed her as it so obviously embarrasses her son. But that's okay. I understand. Who in this world wants to see his grandmother dance in the Costco?

The Christmas present which Owen spied is in a closet in my house now and Santa is going to come and get it and take it to his workshop and fix it up and wrap it and put it under the tree on Christmas for Owen and that's just the way it is. And until then, there are Lincoln Logs to play with and his father will build him a farm house with them and they will construct corrals for the donkey and the Tyrannosaurus Rex and the pigs and the cows and the horses and the hippos and the bears. And Gibson will chew on everything he can get his hands on and when he is sleepy, he will lay back in my arms and drink a bottle and Owen will tell me to go put him in his crib so that he and I can play.

"What you want to do today?" he asks all the time. Even if we've been playing together all day long.