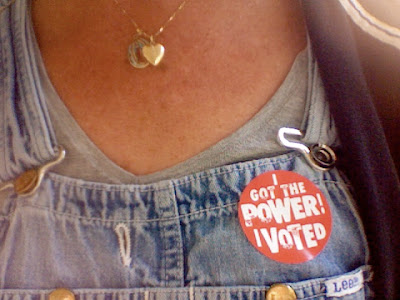 I went today to early-vote. I just couldn't stand it. Couldn't wait for next Tuesday because what if something happened? What if I got really sick and couldn't go? What if the Baptist church where my precinct votes got struck by lightening? What if the comet hit the earth and I hadn't cast my vote for Barack Obama and my vote against Proposition Two which states:

"This amendment protects marriage as the legal union of only one man and one woman as husband and wife and provides that no other legal union that is treated as marriage or the substantial equivalent thereof shall be valid or recognized."

Living here in Florida, I don't have a lot of faith that that one is going to get voted down. We're in the damn buckle of the Bible Belt here with crazy ass Christians who can't understand that Jesus never said one word about homosexuality and who are so repelled at the thought of two people of the same sex having sex that they want to amend our Constitution to make sure that even if two people ARE having sex when they're not the right sexes, they can't get married because then somehow that sex would be okay.

Makes my blood boil. I wrote about gay marriage almost a year ago and you can read that if you want to right here.

So when I marked that circle next to the NO on that particular part of the ballot, I felt angry and at the same time, defeated, because like I said, unless the people of Florida are more advanced and open-minded than I think they are, this one is going down.

On the other hand, when I marked the circle for Obama/Biden, I had a different kind of feeling. It was one of those this-is-history-this-is-really-important feelings. Like for a second, time stood still and I realized I would remember that second forever.

Where were you when you voted for Obama?

I was in a little brick building in Monticello, Florida and the lady who gave me my ballot said, "Just fill this out and put it in the machine and we'll have you out of here in no time." But in a friendly way, like she figured I had somewhere important to be.

I wanted to say, "No, lady, I am going to take my time with this. I am going to savor the moment. I am doing the most important thing I could possibly be doing at this moment in time."

And I did. I took my time. I don't remember feeling that way about voting ever before in my life. I remember voting for Jimmy Carter when he was running against Ronald Reagan, and I remember hoping with all my heart that the California actor who obviously did not know reality from the made-up myths of Hollywood did not win this one and that the painfully honest and sometimes awkward man from Georgia would, but I had a sinking feeling (like the one I have about Prop 2) that it was all going to go to hell and the old smooth-talker would win.

I remember but it wasn't like the way I felt today, marking my ballot for Obama.

I had hope today. It wasn't marking a ballot for the candidate I hated the least. It was marking a ballot for a man whom I would joyfully see be our president. A smart man. A calm man. A man who has come up the hard way and offered to take on a responsibility that he owed no one.

And oh dear God, how I would love to see those beautiful children of his playing in the Rose Garden. And his gorgeous, strong, smart wife standing at his side, welcoming world leaders and representing our country all over the world. A woman whose elegance and beauty do not come from plastic surgery or make-up or designer clothes but from intelligence and humor and dedication.

It's time. It's such a cliche, but it's time for change. Not just a change, but for many, many changes. The kind that can help heal the earth, make peace possible and make things like Proposition Two relics of a long-gone past.

And I pray, in the way that I know and can pray, that my moment in the little brick building in Monticello today was part of that.

I hope millions of us do.

I would be so much prouder to be an American if Barack Obama gets elected. Can we make it happen? Can we elect this so-obviously more qualified man to be president, even though tens of thousands of "real" Americans are hiding behind bullshit reasons not to elect him ranging from he's the Anti-Christ to his middle name is Hussein when really, they are merely racist?

I almost believe we are.

Five more days to find out for sure.

It feels like time is standing still and at the same time, it feels like we are rushing to a new part of our history. A part I can actually believe in.