I Talk Too Much 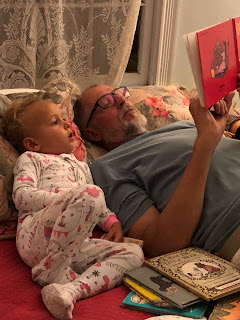 Last night was so sweet. August was tired because he was too excited to take a nap yesterday and he sort of fought eating his supper a teeny tiny bit as he knew that was the first step in getting ready to go to bed for the night. But as soon as we sat him down in front of his plate he ate almost an entire sweet potato, a half an ear of corn, some green beans and some pork chop. He gobbled that food down!
Then it was bath time and he swam about the big tub for awhile and then I washed him up and dried him off and got him in his pajamas and his Boppy read him a book. "Corduroy" which is one of all of the children's favorites. I read three or four more books and then it was time to get in the bed and he was a little weepy but not much and he wanted water and he got water and then it was REALLY time to get in bed and I said, "Do you want to sleep with the monkey?"
I have a very old Zippy doll that I hardly let the children touch but I knew he was going to be asleep in moments so I offered it.
"I want two monkeys," he said. Zippy sits on the mantel in that room with a miniature sock monkey that Lily made for me long ago. I handed both of them to him and he laid down and let me cover him up and I said, "I'll be right here," and I laid down on the bed next to his bed and he was asleep within a cat's twitch of a whisker.

He slept all night long, not waking until a little after eight and I heard him call me and went to him and he said, "I awake now," and I said, "I see that." How did you sleep?"
"Pretty good," he said.
Of course.
He ran to find his Boppy who'd already gotten up and I went back to sleep for a little while.
When I got up I realized that overnight, August's hair had gone all Liberace. He had a curl on the top that would not stop and where these curls have suddenly come from, I do not know. We attribute Maggie's curls to her other grandmother who has gloriously curly hair but August's curls must simply be from god. 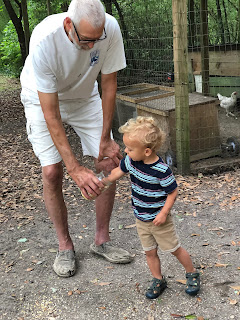 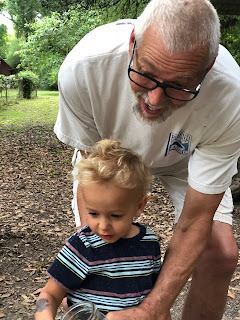 There was chicken feeding and pancakes, there was more TV and lots of playing.
When his mama and brother and daddy showed up, he barely registered them. I think Levon was glad to see August, though. He crawled all over him.
Vergil helped Mr. Moon with the bathroom project for a bit and so I got to hang out with Jessie and the boys. That Levon is such a beautiful goofy fellow with his two perfect teeth in his big baby smile. I can't help but reach out for him every time he gets within arm's length.

When it came time to leave, August cried a few tears, holding on to his grandfather but would not deign to kiss or hug his Mer.
Sigh.
It was okay though because earlier when I had put his shoes on he said, "Mer is so sweet."
As with all of the grandchildren, he is his own person and whereas Magnolia can't get enough hugs and kisses, August needs very few. One must respect that and I do.

I had a hard time sleeping last night and so I kept going through the baby chicks in my mind and I think I have named them all now.
1. The Buff Orpington- Apricot
2. The Barred Rock- Babette
3. The smaller Americauna- Pansy
4. The larger Americauna- Eggy Tina
5. One of the black Vulture-looking Jungle Fowl- Viv
6. The other black Vulture-looking Jungle Fowl- Vera
7. One of the red/brown Jungle Fowl- Hawkeye
8. The other red/brown Jungle Fowl- Dearie
9. The Rhode Island Red- Nicey
10. The Dixie Rainbow- Dixie
11. The Wyandotte- Mr. Moon is going to name her. He likes her especially because she looks like an eagle.

So there you go for the Spring 2018 flock of chickens. I am thinking that Apricot may well be a rooster. As soon as I open the door for them in the morning, she/he flies out and begins pecking all of the other birds as they exit the little shelter. Not serious pecking but pecking nonetheless.
The pecking order is being established and if she turns out to be he I will give him a different name. A rock star name because that is how I do it.

You know what? When I was a girl, the idea of living into the 2,000's was absolutely unfathomable. And if you'd told me that not only would I do that but that I would have the most fabulous husband in the world, four children and five grandchildren and CHICKENS, I never would have believed you.
Nope. Would not have believed you.
Whatever dreams I may have had (and they were few), they did not include those things.