I am cooking brown and wild rice and have sliced up many types of vegetables and that's what we're eating for supper.
I still don't have anything to talk about. Today has been about the Secret Wedding Stuff and also Last Will And Testament Executor Stuff and that's about it.
Well, except for Owen and Gibson.
Who are funny and fine.
Gibson is doing this thing when I take his picture where he sways over to his right and smiles like a crazy person. He is posing. But it happens really fast and it's hard to get a good picture because it's such a swift, graceful movement. Here's one attempt. 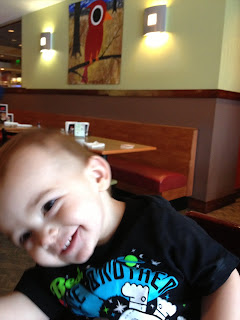 Here's another picture of him just being normal. 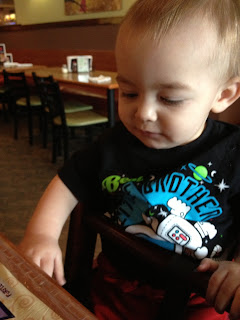 Owen wanted some breath spray I had in my purse which I have been carrying around since last year when it was finished being a prop in a play I was in. I told him it was very spicy and he wouldn't like it but he wanted it anyway. I gave his tongue a tiny blast and he, as expected, was shocked and hated it.
"I never, never, NEVER do that again!" he said after he'd recovered enough to speak.

And that's about it. It's a Monday night, I'm about to go cook those vegetables and I honestly don't have one more thing to say. Except that I got a really, really big egg today.
Bless that hen's heart. And woo-woo.