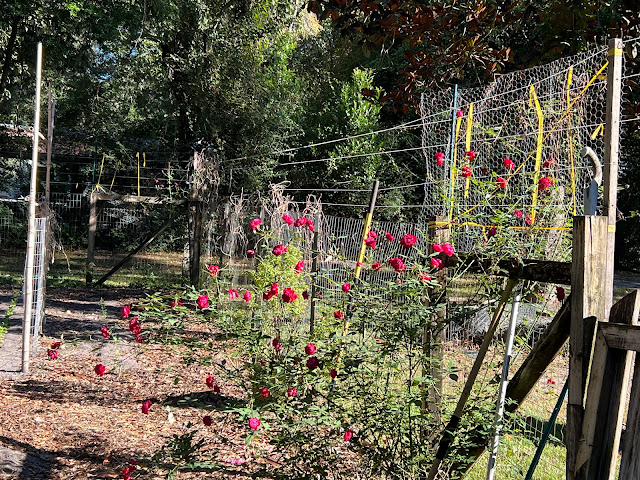 Well, that is a far more cheerful picture than the one I could post at this moment. About an hour ago there was a family group text with a picture of Owen lying on a bed in a medical facility with a sling on his arm. I'd post it but he looks too sad and in pain and there is no need for that.
My poor baby.
He was skateboarding...
These boys and their arms! And sometimes legs. This is not the first time Owen has broken an arm. He'll be okay. They are going to just wrap it tonight and tomorrow he'll go to the orthopedic clinic to get it set properly. I wish we had stock in that clinic.
I talked to Lily and a little bit to Owen and I could tell his pain was severe. "Have they given him anything for pain?" I asked.
"Not yet," she said.
"Well, see if they will."
It seems to me that the medical people just do not consider the pain levels of children the way they do with adults which is ridiculous and not right. But Lily found a nurse and they have given him some morphine which, as we all know, will get the job done. He's in the same ER facility that I was in almost exactly a year ago with my appendix and I will never forget the relief that morphine brought to me before they got me into surgery. I am hoping that it does the same for our boy.

Aside from that, how was the play, Mrs. Lincoln?

Actually, it's been a very fine day.
Vergil went hunting this morning at our friend Tom's house and he got a doe. Almost all of the meat that their family eats is meat that has been hunted or fished by Vergil or Mr. Moon so this is a big deal. He brought it over here to process because all of the equipment is here and Jessie and the boys came out with ice to keep the deer on because that is how it is done. And since it was a Sunday morning I made a nice breakfast of biscuits and bacon and eggs. We ate on the porch and it was sweet. 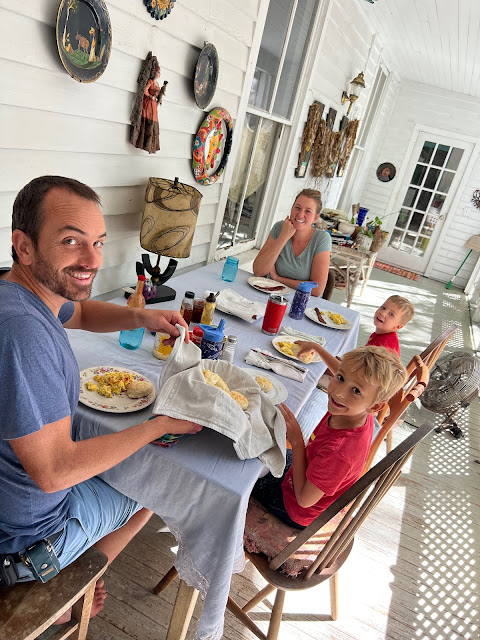 August ate three "savory" biscuits as he calls them, with mayonnaise, mustard, avocado, tomatoes, and bacon. Levon ate some eggs and bacon and had honey on his biscuit.
They left soon after that with good-bye treats of a cookie each that I had saved back after I made a batch for Mr. Moon to have on his trip, and I have had yet another very leisurely day although I did replant a few things in the garden that haven't shown any signs of coming up and I picked the first few thinnings of arugula and a few cherry tomatoes that we planted late.
And then, I finally mopped the kitchen, pantry, and the bathroom.
I was embarrassed to let Mark see the state the kitchen floor was in. He is actually a very neat and tidy person and is the first house-sitter we've ever had who actually cleaned BEHIND THE TAPS on the kitchen sink.
I swooned when I saw that.
Mr. Moon should be home in a few hours. He's taking it very slowly. He left the reunion at a reasonable hour but then a buddy and his wife came over to where he was staying and they talked until two in the morning.
Understandable.
I'll be relieved when he pulls into the driveway.
The light this evening is absolutely splendid and it was this morning too, which is when I took the top picture of the roses blooming in the garden. They are so leggy and yes, I do prune them but the heirloom roses just do what they want for the most part and grow and bloom in accordance with some mysterious plan of their own and who am I to try and tell them what to do and when to do it? 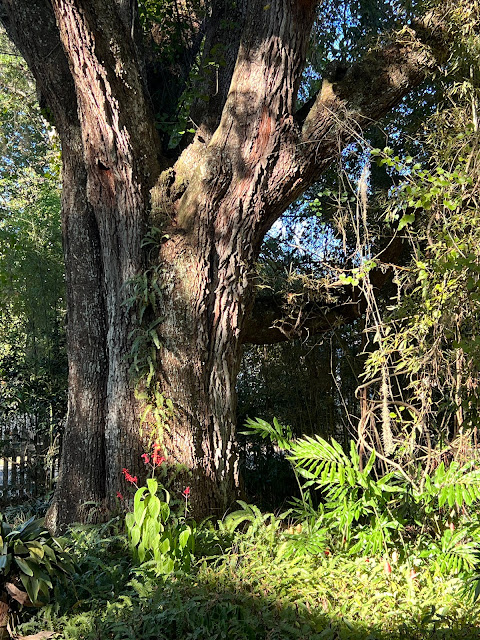 That is the live oak in the front of our house. I rarely take pictures of it because I can never capture the incredible size and majesty of it and feel a great need to do it justice. But this evening, with the light the way it was, showing the deep crevices and wrinkles of its aged-being, I took one anyway. The limb that goes out to the right has a huge hollow hole in it that goes from one side to the other and eventually it will fall. That limb is as big as most trees. But- the hole has been there for the entire time we've lived here. Eighteen years. Like the roses, these trees have a schedule and plan and a span of their own and I can only be grateful for the fact that I can live here as witness to their ancient lives.
In two days I'll be in a place where I can visit a pine tree that grows by the river that was old when I was a child, got struck by lightening when I lived there, and has lived to envelop the scar and continue to grow and reach its branches towards the sky. I can still remember the smell of the charred bark and wood of the tree after the lightening blast. I thought it would probably die but it has not. I will take a picture of it while I'm there.
The latest report on Owen is that he is okay. I am sure that it's going to be a rough night for that tough boy but as I told him on the phone, "You are going to get through this. You will be all right. You are strong. I love you so much."
"I know," he said,"I love you too," and I could hear the thickness of tears in his throat. He doesn't really know but he will learn. As we all must do.