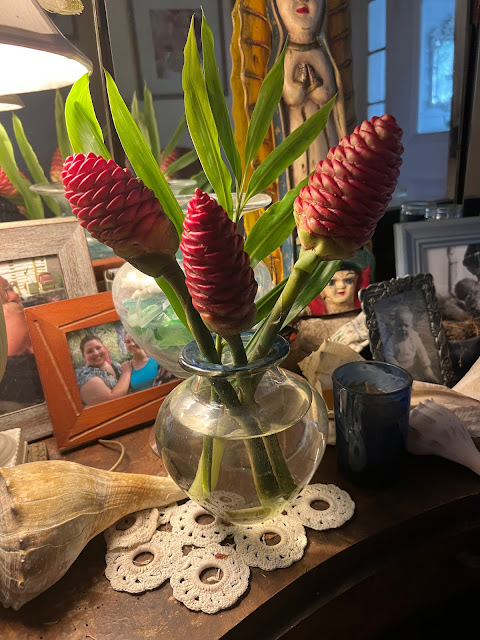 The pine cone lilies are doing their fall scarlet magic trick, sending up these beautiful cones. I just learned from my plant app that these gingers are also called "bitter ginger". I knew that some people call them "shampoo lilies" because the liquid in the cones can be used as a shampoo. The cones are not dense, but somewhat smushy and hold a lot of the liquid in them. And after years of growing these, I just learned another fact- the roots can indeed be used in cooking.

A lot has happened here since last night! Well, you know- for me.

With the impetus of the article I posted last night and the courage born of two martinis, I emailed the owner of the pool house with the pink stove to ask if he had any dates available in the next week or two and he did and so Mr. Moon and I are leaving on Tuesday to go stay for almost a week. My husband has been pushing me to do this because he's about to begin his yearly hunting adventures in various and distant places and I think it will relieve his guilt immensely if he takes me somewhere I love before leaving me to travel which is silly because I do not mind at all being alone but I love him for wanting to take me away for a little trip.

He had suggested that we go last month but I, facing that doctor's appointment, told him that I could not enjoy myself until I had gotten through it and knew that all was well. This of course is crazy-thinking but he knows me and he understands that this is how I am. I think the whole experience of anticipatory anxiety kicked off a bout of extremely uncomfortable regular anxiety for me which has not been fun at all. And the idea of leaving my home, my routine, has been almost more than I could bear. But, I had a talk with myself and, knowing it was exactly what I needed to do, I wrote that email. Of course I woke up at 2:30 in the morning thinking, "WHAT HAVE I DONE?" but eventually I went back to sleep and all day I have been glad I made the plan. Glen says, "Let's GO!" and so we shall.

And to make it all even better, I got a text this morning from our friend Mark who is an amazing house sitter, entirely out of the blue that said, "I love you," and I wrote him back, "I love you too! Want to come and stay here next week while Glen and I go off?"
He did! He does!
And so I have not had to worry about that for a second.

Another thing that happened yesterday was that I texted back and forth with our beloved Billy almost all day and we ended up agreeing that he and his wife, Shayla, and son, Waylon, should come out for a little visit today. And that happened!

Those of you who have been here forever know of Darling Billy and Beautiful Shayla and their boy Waylon. Billy and Shayla got married here in our back yard quite awhile ago. In fact, I performed the ceremony which was one of the biggest honors of my life. I met Billy through Hank back when Billy was in high school, and when he started bringing Shayla around, we were all so happy.
She is the real-deal person.
And I have not laid physical eyes on them for a very long time. Billy works from home now, as a crisis-line intervention counselor, and Shayla is a first grade teacher. Probably the best first grade teacher in the world. Definitely in Florida. We sat on the back porch this afternoon and ate roasted peanuts and talked and talked and talked about all the things that matter in life. Waylon hung out on the periphery, seemingly pretty content.
Before they left I asked if I could take a picture of them for the blog and Waylon, who was already in the car, said, "Just one! One picture!" I promised just one picture. 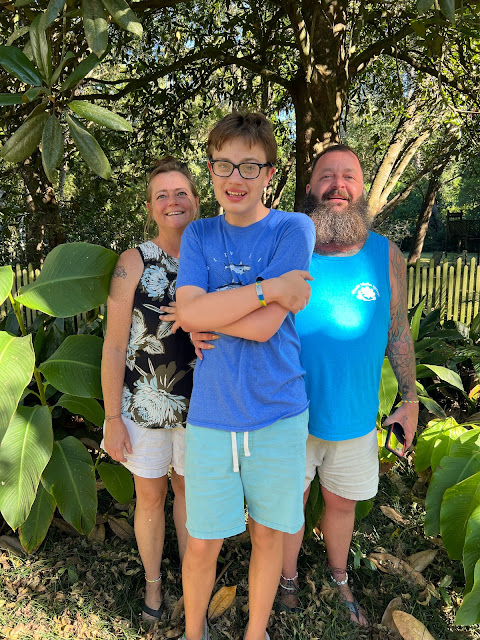 I will always keep my promises to Waylon. He is almost thirteen and I swear he is going to be as tall as Glen. He's 1/4 inch short of being 6'.
And then, because Billy and Shayla allowed me, I took another picture of the two of them. 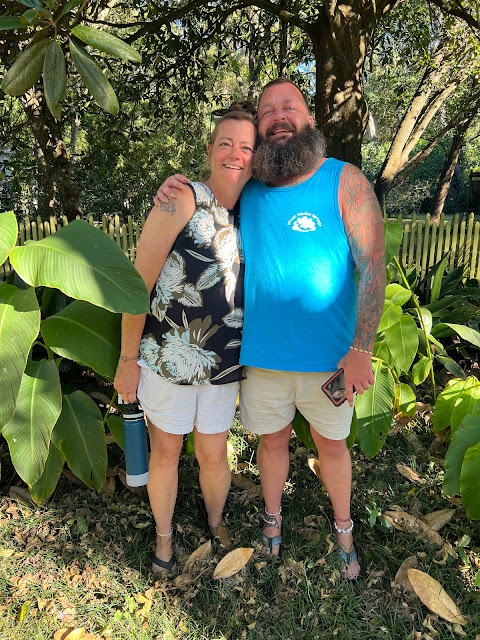 As Jessie said when I sent her these pictures, "Oh my gosh. Those people are just love in human form."
And they are.
So. That is what has happened in my tiny world today. I got two darling pictures of August and Levon with Cherry from Jessie. 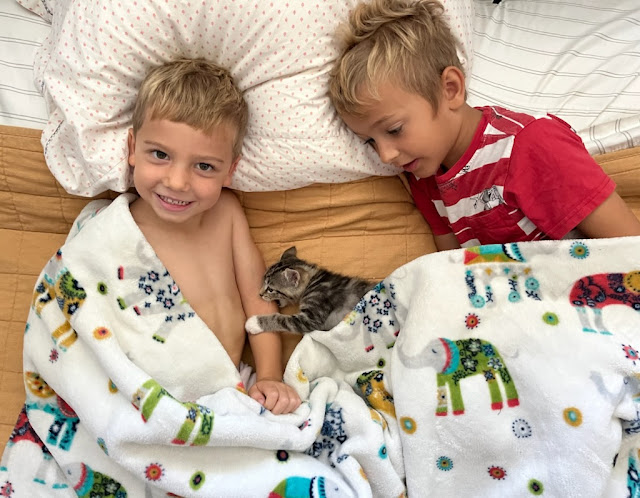 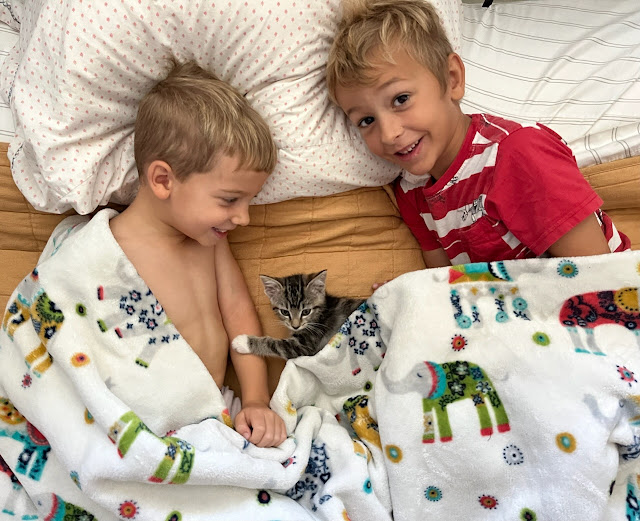 This morning on Facebook, a memory showed up from August's first birthday party. I had linked to THIS POST from blessourhearts and when I went back and read it, I remembered for sure why I keep this blog. I have a record of so much of my life and my family and if my grandbabies want to know what they did and how they looked from the earliest years of their life, they will be able to see. 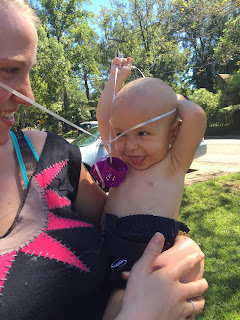 The Cuteness is Overwhelming. 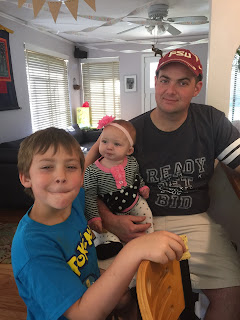 Magnolia looks at Owen, her big brother, with eyes of love and adoration. 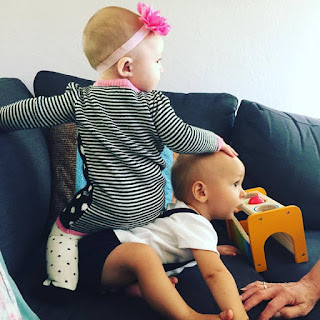 And then, Magnolia June demonstrates her dominance of the world at an early age, much to August's consternation.
And one more picture from that post. 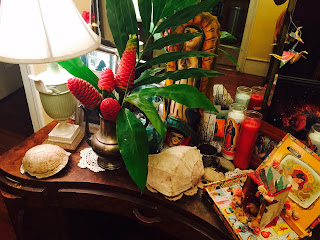