This Is Not So Bad

Well, another day of getting a few things done along with a visit from Jessie and August and Levon. Some days Jessie finds it easier to bring the boys over here so that she can do virtual school with August while Levon hangs out with me. And I enjoy spending time with that little guy. He may be rowdy at home when his mother is trying to concentrate on August's schooling but he's sweet here when he has me all to himself. August is going to go back to school soon. Covid cases in the schools have dropped and it is quite obvious that August is really not enjoying his learning time every day. It's just so hard for a kindergartener. And Levon has already started going back to his little preschool a few days a week and he likes it. I asked him today what he does at school.
"Nothing," he replied.
"Nothing? What? Do you just sit in a chair and think?"
"No. I hang out."

Today before school time started in my kitchen, we all had lunch. We finished up the soup I made last week and I was so glad for it not to go to waste. For a bribe and a special treat, cake was promised for when lessons were over AND- they could watch a little TV while they ate the cake.
This was like the best promise that could ever have been made.

Levon wanted to read books and you know how I feel about that.
YES! YES! YES!
Lately he's been loving the book "Banjo Granny." 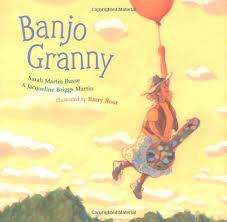 It's a very sweet book about a grandmother who plays the banjo who goes on a long journey to get to her little grandson who loves bluegrass music. So we read that and hit a few more classics including a few that I've read so many times that I'm sure I could read them in my sleep. When he asked for "A Fish Out of Water," I said, "How many times have I read this to you?"
"A billion," he said.
And I'm sure that I've read it two billion times to Owen and Gibson. And yet, somehow I never tire of reading it. I think it's because there are different voices and absurdly dramatic situations that I can get all actor-y with. Reading books out loud, especially to children, satisfies my dramatic and literary needs to a T.
Let's face it- I am a drama queen. I never really had true aspirations to the stage and/or screen but I surely have loved the time I've spent pretending to be someone else in the service of the little bit of acting I have done and I'm glad I've gotten to do it and will always remember it with great fondness and a little bit of pride.
Sigh...
Oh! August has a new hairstyle! His mother gave his daddy a haircut the other day and while she was at it, she gave August one too. She wanted to save his curls which grow mostly in the back so he has a sort of mullet now. 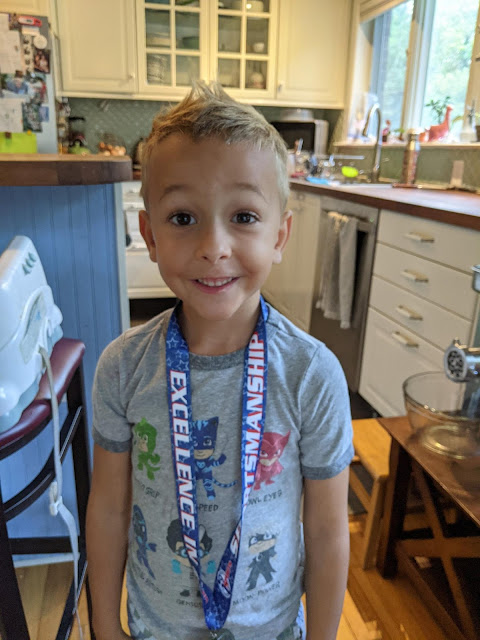 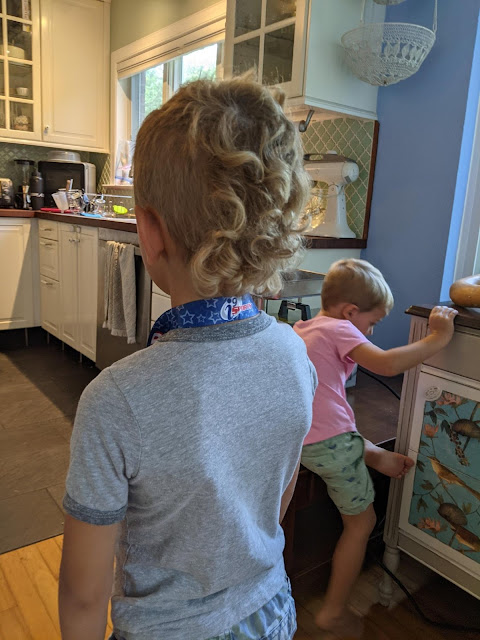 He loves it and I do too.
Ain't nobody like my baby.
After studying, there was indeed cake and TV. The boys and Jessie pronounced the cake to be very good. August said that the icing was the best in the world. He is a bit prone to hyperbole but it was nice to hear.
Before they left, Jessie tried to catch some chickens to take home but I think we're going to have to do it at night when they're on the roost. How in the world anyone catches a chicken to cut its head off is beyond me. She really wants Fancy Pants and it would make me very happy to know that he has his own flock because his life is so lonely now.
And that was the exciting part of my day although I did get another package sent off this morning. Strangely, I am really enjoying this package-making and sending. Linda Sue, when she sent packages to me, decorated the boxes she sent and that gave me a whole new outlook on mailing things. My packages are nothing like the works of art she created but they've been like little art projects done with old calendar pages and lots of clear packing tape. I was feeling so productive and happy about having gotten today's package off until I got home and realized I had no idea where my debit card was. I'd put it in my pocket to take to pay for postage but somehow it had disappeared. I'd driven to the post office because I had trash to take too and so had gone directly from the PO to my house and yet- the debit card was nowhere to be found. Wasn't in my pocket. Had I just thrown it in my purse when I got home?
No I had not and it was definitely NOT in my wallet where it lives.
I went out and searched the car.
Not there.
Drove BACK to the post office and looked in the parking lot and went inside and asked the post mistress if she'd found it. She had not.
I was mystified. Also, feeling ridiculous.
I finally did a more thorough search of the car and found it in that no-man's land between the seat and the center console.
I was relieved even though I knew that it had to be somewhere. Well. Duh.
Mr. Moon has made it to Canada! He texted me today that "They let me in!" And all is well. I think he's already having a fantastic time which makes me feel a little better about how much I'm enjoying having the house to myself. Which I am.
I guess I better go make my supper. I love cooking for myself. Last night I made a lovely shrimp dish with orzo and vegetables and feta. The chicken pot pies I made two days ago were, well- dreamy. I eat my solo dinner while watching TV that Mr. Moon would not enjoy at all and feel no guilt. Last night I started watching a Netflix series (The Duchess) that is raunchy and funny and which I see Variety called, "A Tasteless Misfire."
Haha! Who cares? I like it.
Tomorrow I am going to rip my steri-strips off. I could it have done it today as it is the tenth day after surgery but I am giving it an extra 24 hours. And then, if it ever stops raining (which it has been doing almost all day long), I'm going to start getting a little more physical.
And one last thing. Lily sent pictures that Maggie had made in school of George and Abe. Would you look at this? 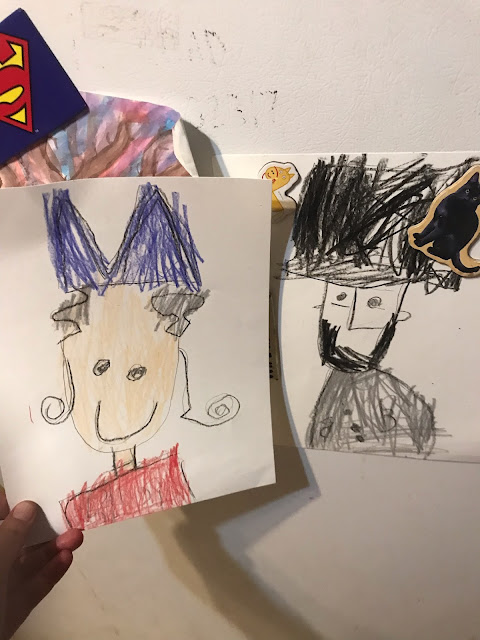