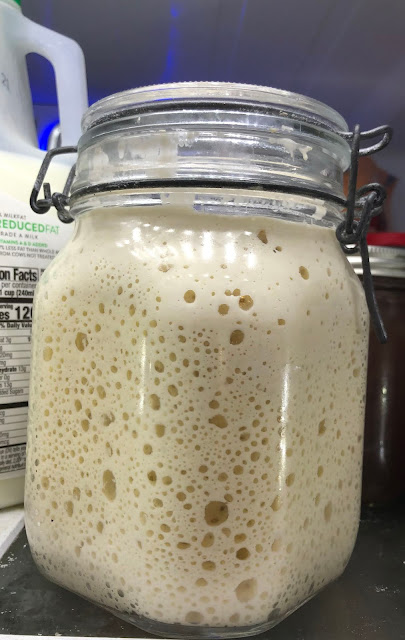 I think we can safely say that if my bread is not rising now, it is not the fault of the starter. Would you LOOK at that? It not only doubled in size, it quadrupled. I think this is the most active starter I've ever had.
Yay, Lloyd wild yeast!

Oh god. What a day. I mean, it's been fine. I just haven't felt that well and have let Mr. Moon do all the outside work, meaning that he's been planting the garden all day. I just stayed out of his way. We have differing opinions on garden planting plus, as I have pointed out before, his rows are straight and true and mine are crooked and drive him crazy. So I've been playing around with another loaf of sourdough, trying to incorporate the methods found on this video. I mean- what else do I have to do all day besides fold sourdough dough? And I have to tell you that my dough does not look or handle like her dough. And I think she's about twelve years old so that doesn't make me feel very secure within myself concerning my hard-won skills and knowledge. BUT, my dough is actually looking beautiful in its own way and making bubbles even if it doesn't look exactly like hers and I am learning. I freely and joyfully admit that I still want and need to learn.

A beautiful thing that happened today is that a very old friend of ours, a man with whom we have shared some extremely emotional and important experiences in our lives, came by for a visit. Our relationship with him became very complex for many years and our lives diverged sharply. I had honestly thought that we might never reconnect but...today we did. And it was like seeing and hugging a brother. Someday perhaps I will write some of the story of how our paths joined but it is a deeply emotional and complex story. Suffice it to say, it was terrific to see him, catch up. He and Mr. Moon and I sat in the kitchen and talked and laughed. We did no reminiscing and that's okay. It was not the time for that. It may never be. Some things do not need to be discussed because they are so deeply engrained in all which makes up the now.

And now it's almost 9:00 pm and since I wrote that we have had supper with Jessie and Vergil and the boys who came over to get two hens and Fancy Pants to take home, which they did. I made a nice pot of chili and a good pan of cornbread which we ate with butter and cane syrup. 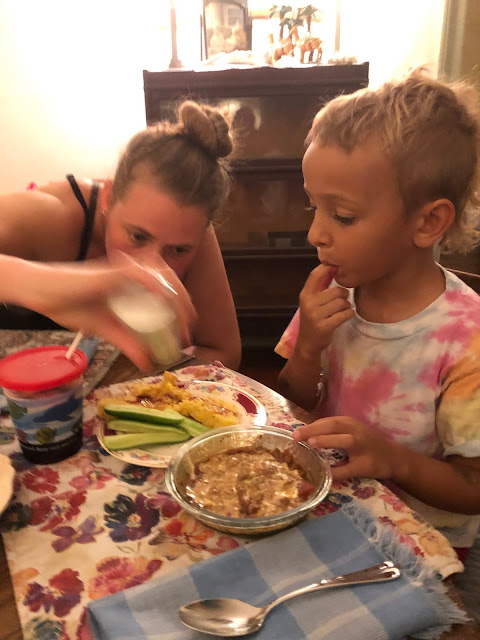 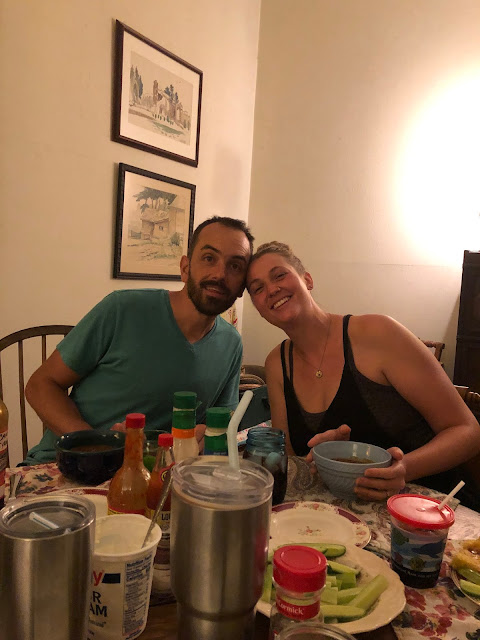 The boys took their baths here so that if they fall asleep on the way home, they are ready to be transported directly to bed. When their parents had finally corralled them and somehow, miraculously, managed to get them into their pajamas and their teeth brushed and then taken to the truck, Jessie and Mr. Moon and I went out in the moonlight and each of us picked up a chicken to put in the box Jessie had brought for that purpose. Fancy Pants is going to have his own flock of ladies and two of our hens will have a new and wonderful home in Tallahassee. As we went about our chicken transfer, we heard and then saw pretty dang professional  fireworks going off right to the east of us and I have no idea what that was about although I suppose it may be someone's birthday.

I baked my loaf of bread and it is rather disappointing. I thought it would rise much higher than it did. I'll cut it tomorrow to see what it looks like inside.

It's been that sort of day. One unexpected and unplanned event after another, ending in fireworks.

But Mr. Moon got everything planted except for the kale and rainbow chard which is not exactly surprising as those two are not his favorites. But they will get planted and I am so damn glad to know that seeds are in the ground and have been watered in.

It is so weird and so odd to think that three weeks ago, right now, I was being transported to the hospital to get surgery. Has anything been normal since that pain in my belly started?
Is anything ever normal and if so, what does that mean?