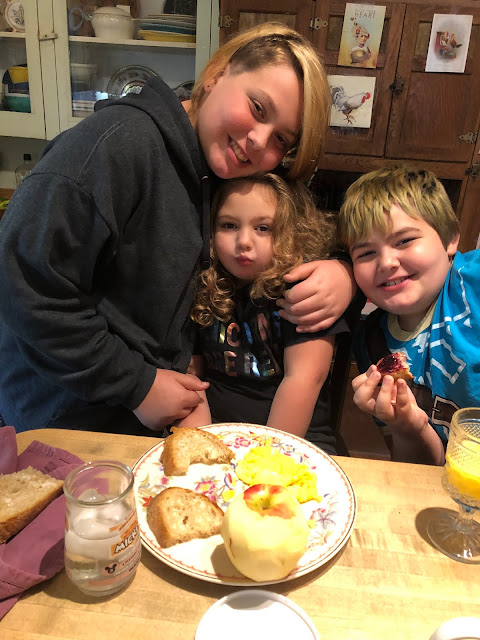 Lily texted this morning to tell me that Maggie was refusing to eat breakfast until she got to our house. I think she wanted our eggs although the eggs in her house come from my hen house too. But I understood and only laughed at that bit of sweet ritual for her. Before she ate she wanted to go out to check for eggs and she grabbed her little basket where I keep it on a low shelf and although we only found one egg, she was happy. It was warm and as fresh as an egg can be and her brother Gibson mixed it up with another for her breakfast. Owen peeled her apple and cooked the eggs and I toasted and buttered sourdough for us all. Everything was proclaimed delicious.

I had such a good time with those children today. They were sweet and funny and played pretend games and Lincoln Logs and didn't fuss or fight. When it came time for meals they set the table without being asked. I was SO impressed. One of the main things they played was "Business." This was inspired by the old fashioned telephone they love to play with and although I am not sure what all "Business" entailed, it seemed to involve some Lincoln Log products, and the rating of various stuffed animals. I gave Maggie a pad and a pen to take notes and she was an excellent employee, I think. 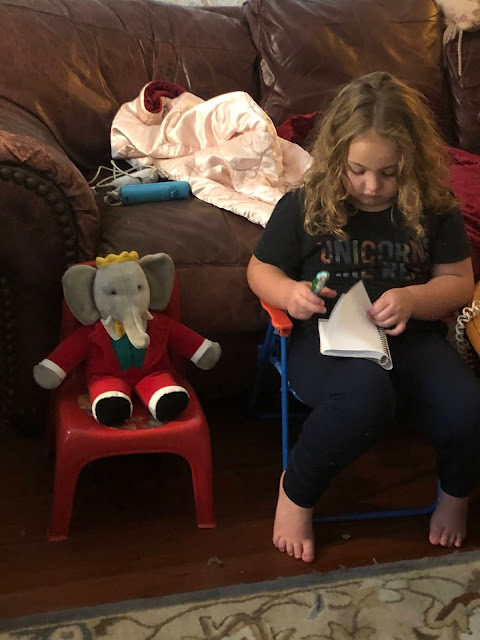 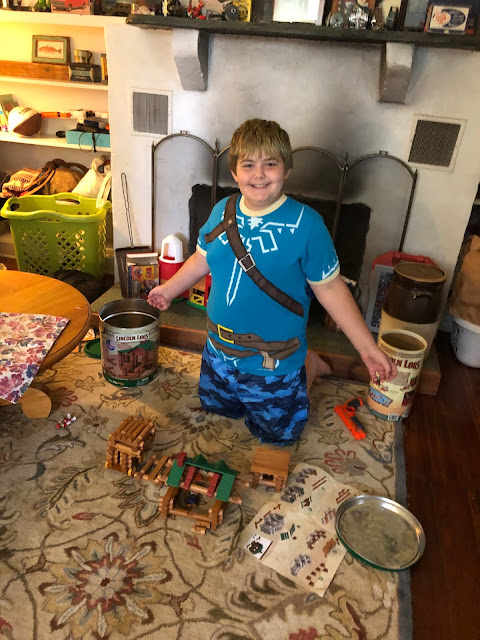 They also took turns being boss.
Maggie and I got out the paper dolls that May gave me years ago and I cut out some of the dresses and Maggie dressed the dolls. 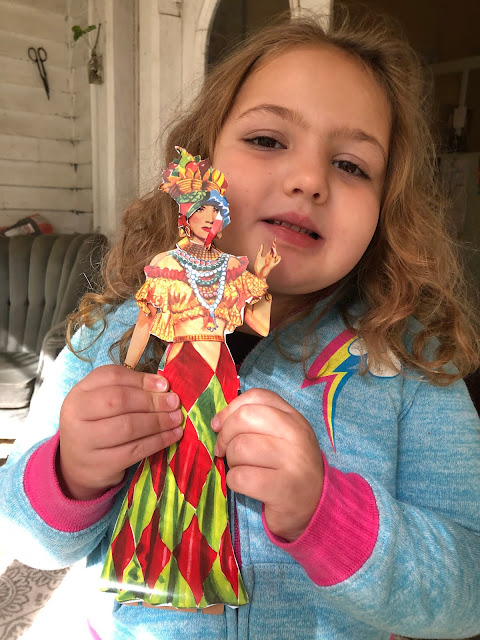 This did not hold her attention for too long but it was fun while it lasted.

The best thing, I do believe, was the Go-Kart rides. 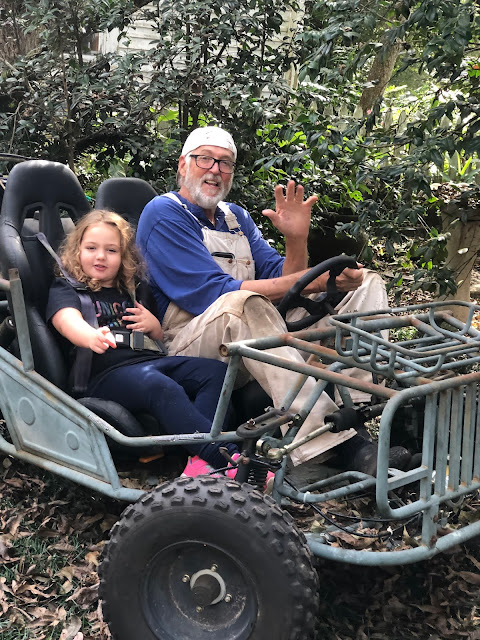 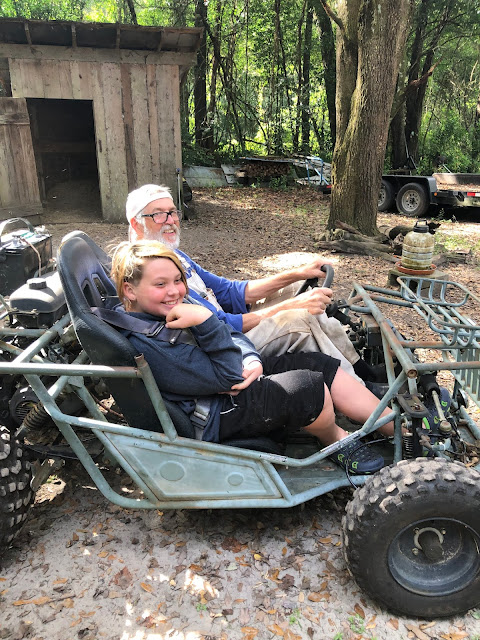 I did not, unfortunately, get a picture of Gibson on his ride but he loved it too. That little thing goes fast!
There was also sitting-on-the-swing-porch and reading a few books and talking about memories. I apologized to Owen for once trying to get him to take a nap by letting him cry it out in the Pac'n'Play. I doubt I let him cry for more than three minutes but it still breaks my heart to think of it. I was never any good at letting a child cry it out. But I remember him, probably about eighteen months old, standing up in the little bed, crying and calling out, "Mer! B?"
I always said, "BRB! Be Right Back!" when I had to leave the room for a second and I think he was asking why I wasn't being right back in the nap-incident.
I almost cried, telling him the story. He laughed. Of course.
Maggie made ME laugh with some of the things she said today. At one point, she noticed that Boppy had made the bed and I thanked my husband for doing that- I usually do it. "Boppy- you are so sweet to Mer!" she said. "You are doing her chores!"
She gave us both pictures of hearts that she drew with her name on them. She told us at lunch that her name really is Magnolia but she likes Maggie better because she can't spell Magnolia.
I understand. She also likes the fact that both Maggie and Mary start with the same letter. She's a smart little child.
Lunch was a big hit. Maggie wanted cheesy noodles because she always wants cheesy noodles at my house. The desire for ritual is deep in children. I also baked the pizza I made last night for them and cut up cucumbers. 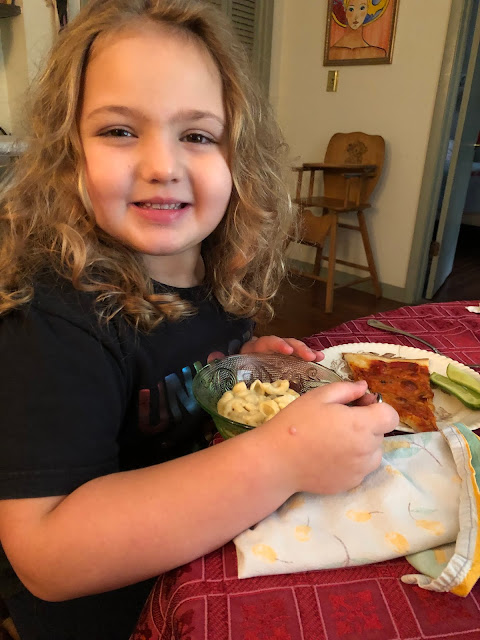 The pizza I made for them was plain cheese pizza whereas the one I made for Mr. Moon and me last night had ALL the stuff on it. Both were good in their own ways. And there's not a bite left of either.
When it was almost time for Lily to get off work I asked them to clean up their toys and they did. And then we played matching game and Battle until Mama got here. She got about fifty hugs and kisses or maybe more. I got a few hugs and kisses myself before they left.
It really was just the sweetest time with them.
Mr. Moon finished the mulching in the garden and now the sprinkler's on. In a few days the miracle of those tiny seedlings breaking ground will happen.
The chickens have been very quiet all day. Although I know that there is no way that they understand the changes that have taken place in their world lately, I am sure that they recognize that there have been changes. And my math was wrong! I am down to thirteen chickens! Which is good. Jessie reports that they now have four roosters in the freezer and one in a pot and that all went well and painlessly. Mr. Moon has gotten his smoker out and is just now putting the duck sausage in it.
Liberace has just brought the girls in to forage under the feeder and around the camellia bed. I've hardly heard him crow at all today. I so admire the way he stands tall and watches so vigilantly as his sister-wives go about their evening feeding. They are talking amongst themselves in their soothing cluck language, rustling through the fallen pecan leaves.

For just this moment, at least, everything seems peaceful and as it should be. Even my very old hen, Little Violet, seems more at ease now that the other roosters are gone. I am hoping that Fancy Pants is enjoying his own very small flock of ladies with a sense of pride. He finally has an outlet for his rooster yearning to protect and defend, to tid-bit and, yes, love. By which I mean have sex with, of course.
I am a contented wife, grandmother, and chicken tender tonight.
Hell. Maurice even let the children scratch her head today without biting them. The fact that she didn't leave her cozy nest on a soft blanket on the couch when they came in the room is a sort of miracle and I'll take it.
Love...Ms. Moon
Posted by Ms. Moon at 6:12 PM