I Needed A Nap 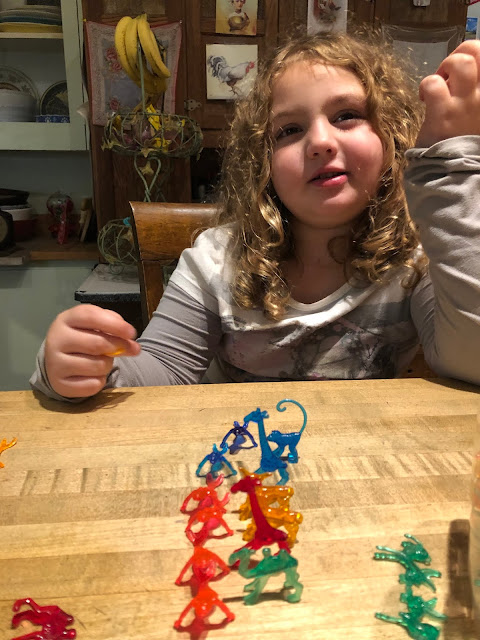 When I was making delicious watery, juicy broccoli last night, I got out the cocktail mermaids and animals for Maggie to play with. She was delighted! Her grandfather joined her and look what they created: 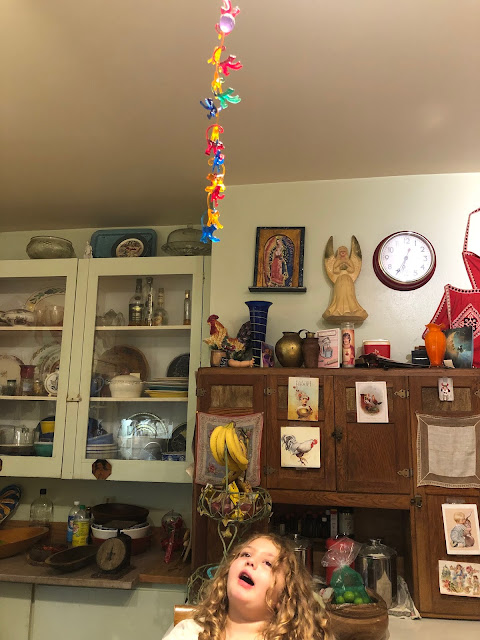 A chain of monkeys, hanging from the light fixture. It's still there. It probably will be there for years, slowly growing as dusty as everything else up there.

So we had a good time with our girl. She is really a sweet child. She kept saying, "I am so glad to be here with you, and I believe her. She sounded like a very sincere little adult at a party. She ate her supper happily- oven fried chicken that, per her instructions, tasted like chicken tenders, the broccoli, and cheesy noodles. And then it was time for the purple cow and then the bath. She let me wash her hair and then she got into her nightgown and she read "The Chicken of the Family" to me. She's about got the thing memorized. There were a few more books and then time for bed. 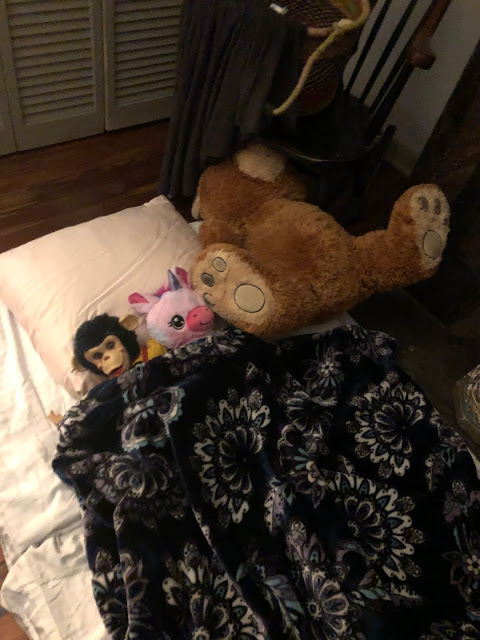 But where would Maggie go?
We figured it out. She went to sleep holding Zippy for whom she has developed a tender love. In fact, this morning before she left, she and Zippy had to have a chat on the swing porch. 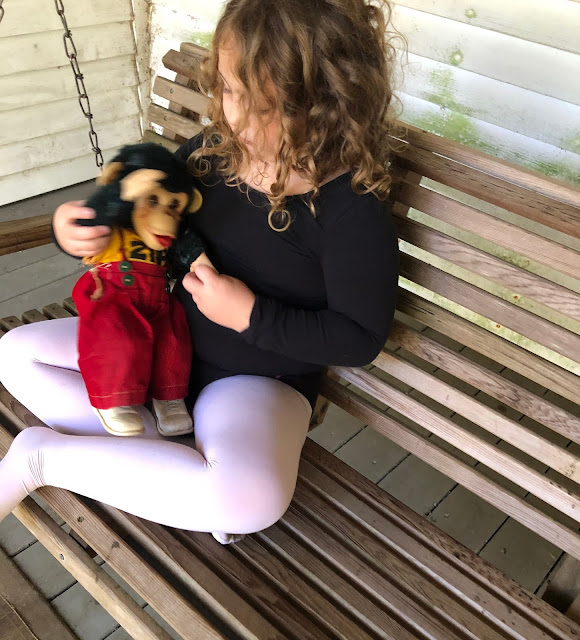 It turns out that Zippy truly loves Magnolia and he is very sad when she leaves and that really, he would like to live with her.
I will leave him to her in my will but until then, the old, old boy will live here. It does make me so happy, though, that she loves him the way I loved my own identical Zippy when I was a little girl. None of the boys have really shown a great deal of interest in him, some of them have even called him "scary". But Maggie gets the chimp love.
She slept through the night until around six at which point she woke up and wanted to cuddle. I had told her before she went to bed that we could indeed cuddle when she woke up so there you go. What was there to do except help her into the bed where she proceeded to cuddle and move about and wiggle and cough (the only coughing I heard her do the whole time she was here) and tug at the quilt and drop the quilt off the edge of the bed and...
Sigh.
About eight her Bop got up with her and I fell back asleep like a stone and had a dream about moving into a condo-like place where my neighbors were Real Housewife types whom I got angry at and actually said, "Fuck you!" to and told them that if they treated me right that I would be the best neighbor they ever had. That I was kind and loving and would be there if they needed me but not if they were bitches.
I am still laughing about this.
I woke up with a jolt, knowing that Maggie had dance at 10:30 and rushed to get the bacon and pancakes started. Breakfast was made and eaten, tights and leotard put on, stuffed animals and possessions gathered and packed and off she went with her Boppy. After she left, I found this poor child whom she had been feeding and then, sadly forgot. 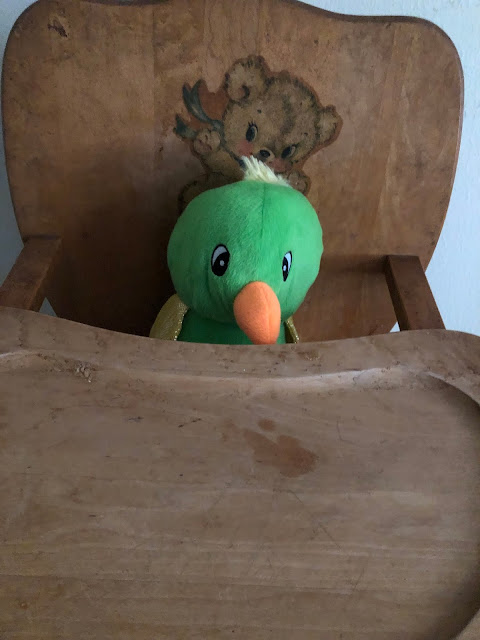 And then I was left alone for a few hours, exhausted and gritty-eyed. I had no energy. So I did very little the rest of the day. A load of laundry, a desultory sweeping of the floors. A nap.
A heavenly nap. A nap like an angel's wings, brushing my eyes to heaviness, an angel's arms holding me in great comfort and peace.
Okay. That was a bit dramatic. But it really did sort of feel that way.
Two more pictures. 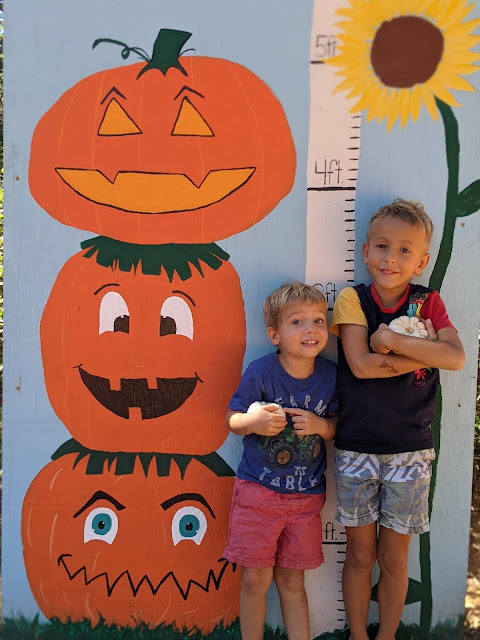 Levon and August at the pumpkin patch. The antibiotics seem to be kicking whatever August has in the butt. Jessie reports he feels very fine indeed today.
And... 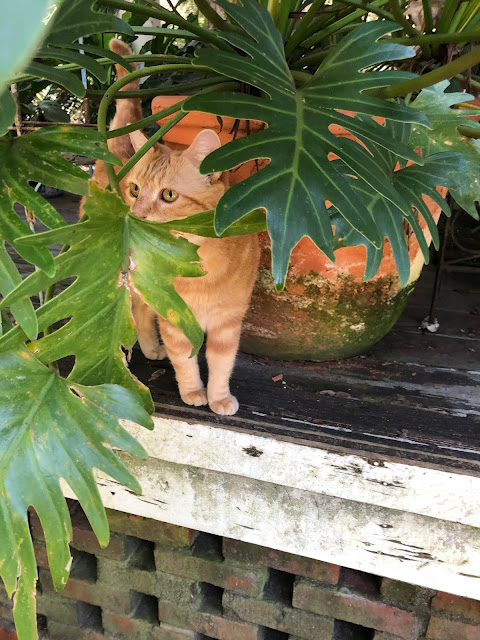 Maurice on the porch, being a jungle cat in her heart, I am sure.
Maggie asked me yesterday why I love Maurice.
I really didn't know how to answer that.
"Because she is mine," I finally said, knowing even as I said it, how pathetic and also untrue that is. Cats do not belong to us. We belong to them. But that's a concept to discuss another day.
Meantime...
Love...Ms. Moon
Posted by Ms. Moon at 6:20 PM