My God I Love The Beach 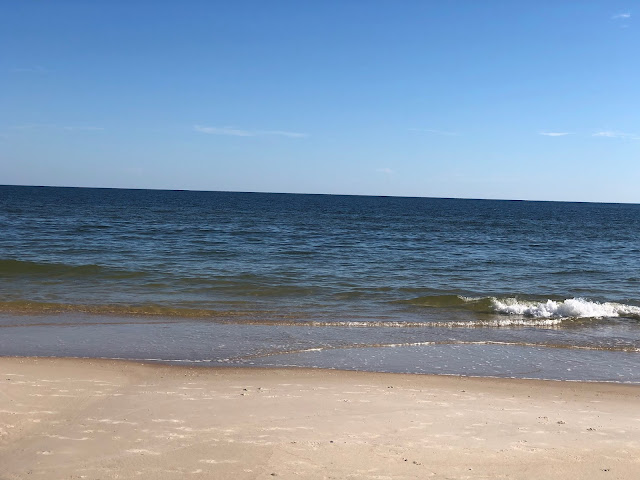 Ah, the water was so much prettier today. Not exactly clear as gin but without silt and I could see the Menhaden silver-flitting under the water when I waded in. Later on, seagulls and pelicans also found them, or their cousins, and dove and darted and had their supper.

The temperature has been unbelievably perfect. Cool-ish but not too chilly to get in the water. Of course things always become closest to perfection on the last day of a trip, don't they?

We've had a very sweet and easy day. Breakfast at the Mexican, lunch at the local raw bar. We sat outside there and two women came in to eat at the table in front of us whom I could have watched all day. I do not know if they were sisters or partners. Possibly friends, but I don't think so. Too much ease and familiarity between them although "ease" is not a word I would actually use to describe either one. Both older, dyed red hair although different shades, both with backs so straight it is impossible not to think they have had surgeries to insert steel rods in their backs. When they sat down, they put a zip lock of bread on the table and they ordered hamburgers but they were to be served on the bread they'd brought, grilled. Mustard seemed important.
No mayonnaise.
For whatever reason, people's behavior and appearances fascinate me and of course I try to figure out everyone's stories from whatever tiny sparks of clues are given off.  As Yoko Ono said and as I so often quote, "Everyone has a story to tell." And oh, how I love a good story.

Our upstairs neighbors here at the little cottages where we are staying were there for lunch too. We finally spoke today, at least the lady and I did. She is PISSED OFF about the construction going on across the street and we discussed that this morning. We agreed that the owner needed to update his VRBO listing yesterfuckingday. She did not use that word. She appears to be far more lady-like than I am.
"We would not have stayed here if we'd known about this," she said, indicating with a wave of her hand the men working up in the air, the compressor screaming to power the nail guns that were going off with staccato briskness.
"Yeah. Me either, probably," I said.
A few hours later I saw her again and she told me that she'd complained to the owner. "Lodged a complaint" I think she said.
"What'd he say?" I asked.
"Oh, that there's construction all over the island."
This is sort of true and sort of not true but the honest truth is that the owner/host is being dishonest in presenting his cottages as having a peaceful and unrestricted view of the beach. I'm not all torn up about it because I live two hours away and can come back anytime but this lady only has one week a year to come to the beach and she had not foreseen that she'd be twenty yards away from a construction site.
Her husband knows TO THE DOT what time the crew begins work and what time they stop. I think he may be a bit upset too.

Having said all of that, I do have to admit that it hasn't upset me too much but dang- my temporary neighbor is right- the owner is not being honest and I already knew that from what I described as a kerfluffle when we were trying to check in.
Life goes on.

So we drove around the island today, looking at houses. Lord, how things have changed since I first started coming here. There was a different bridge then- a toll bridge!- and the houses were funky, few, and far-between. Now there are mini-mansions everywhere and all I can think of is how many crazy rich people there are in America. And you can define crazy rich both ways.

We did see a place down on the bay side with what must be at least two acres of fantastical, whimsical gardening and art work. I mean- whoa! And the house was not shabby. And there's one house on the gulf that I've been watching for years that instead of the usual four-palm-trees-and-some-oleanders landscaping, there's an entire jungle embracing it! And it's a tiny lot. A beautiful, what appears to be a Zen-influenced house wrapped in the green arms of trees and vines, wild and yet contained at the same time. As I said, I've been observing the house and tiny jungle for years and the love and work and patience and time that's gone in it is an inspiration to my heart and soul.
I would take that house.
If they gave it to me.

So it's been a fine day. A loving day. A laughing day. Once again I am knocked to my knees with the sweetness of long-time love. There is nothing like it in the whole world in my experience. 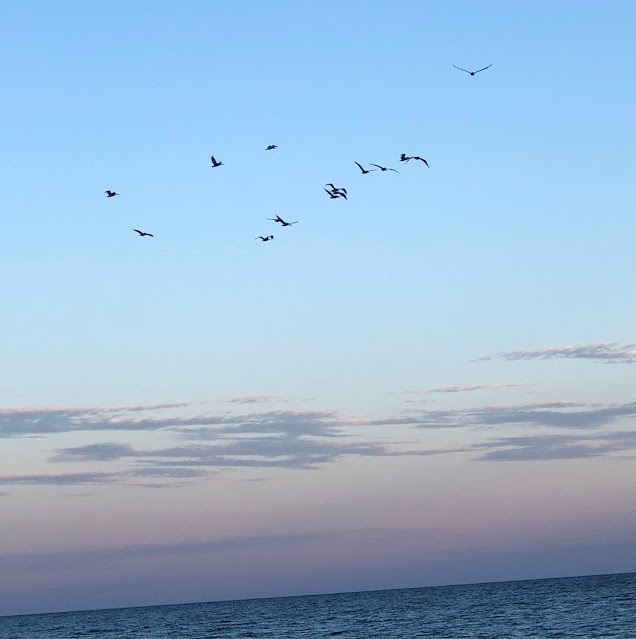 Pelicans. They are the most primeval of birds that I know. Noble and absurd, and we almost killed them all. When these flew overhead I yelled, "Thank you for coming back!" 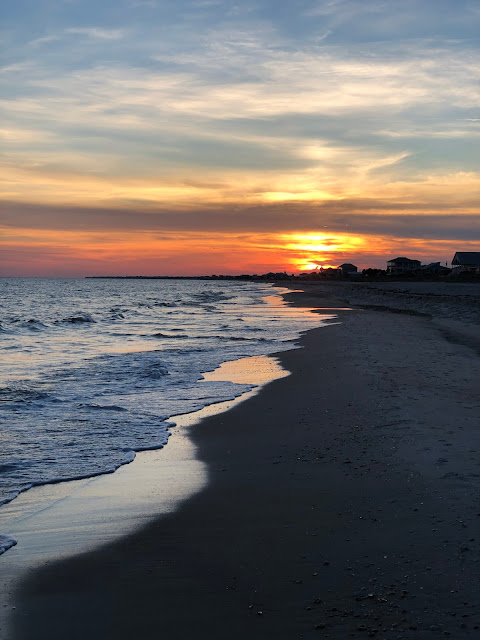 The last sunset for this trip. In my gratefulness and my greediness, I hope with all of my heart that there will be more for us.
Love...Ms. Moon
Posted by Ms. Moon at 7:18 PM