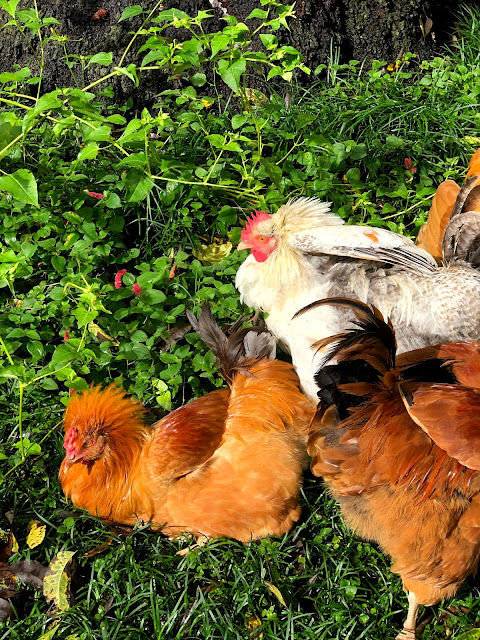 It has rained on and off for two days now, or is it three?
Whatever, the sun came out this afternoon and the chickens took the opportunity to hop off the kitchen porch where they have been sheltering from the damp, happily pooping and molting, to dry out their feathers. 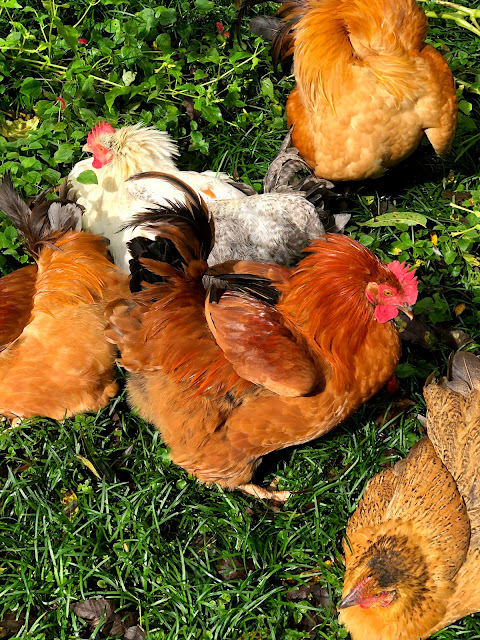 These are four of the young roosters and their sister-hen. The five of them are a flock within the flock. Their only other nest-mate is Fancy Pants, Jr. and he does not hang out with them. I am not sure why.
Is it because he's half banty and so they detect an otherness or does he just have a really rotten personality? Is it his furry feathery legs or is he a narcissist? Do they dislike his voice, his stance or does he tell tale tails about all the sex he's getting that they know he's made up and they're sick of it?
Just when I think I have a handle on chicken society, they surprise me with new behaviors or perhaps I am only actually observing them for the first time.

I ripped the steri-strips off my "wounds" this morning. Haha! I should be ashamed to say I had surgery. I've got a scar from cutting my thumb on a broken cup that's far more impressive than those tiny little dots. How in hell do they pull an entire organ out of one of those?
Please don't tell me if you know. I'd just as soon imagine that magic is involved.

So I went to town today. I did the Holy Trinity- Costco, Publix, the Library. I haven't been in a library in almost two years! Jesus. There was hardly a soul there. Costco and Publix had plenty of people and about half of them were not wearing masks.
So...covid is over?
I guess so.
I wore a mask. Two, in fact, in Costco and Publix. Somehow it seems impossible that one would get sick in a library, being as it's a holy place and all but I did wear one out of respect.

My phone is being a little weird right now. It's not sharing photos with my MacBook again. I've got all the settings right, I think and I suppose I need to sit down with google and figure it all out. This is not really a huge problem but it's annoying.
Another problem I'm having is that my talk-to-text feature is truly whack. Mr. Moon texted me while I was driving to town and so I attempted to answer with voice recorded auto text and this is what happened.

Obviously (I hope) this is not what I meant to say. Usually Siri can understand me almost perfectly but maybe she's off her meds. Again- I do not know.
I don't know shit, do I?
What I was trying to say was that yes, I was on my way to town to get a few things including sugar in case I decided to make more pepper jelly. And then I tried to say "Haha. Yes. That is the best worst auto translate ever." Okay, that one was a little closer.
No matter how often I tried to get Siri to text "sugar" she would only text "shut up OK."
Uh. Was she trying to tell me something?
So I did get more sugar and also teeny tiny canning jars because that way I can only fill the canning kettle a few inches with water which won't be very heavy to transport from sink to stove. Smart, right?
I'll just make lots and lots of four-ounce containers of the stuff. Maybe I'll make this batch really hot with some of those red flame peppers. "Tear Your Tongue Out Jam."
"Devil Fucked My Mouth Jelly."
You get the point.
Please forgive my crude language.
Or don't.
I do have a filthy mouth.
I guess I better sign off now before things get even worse. I bought a piece of salmon for tonight's supper. Here's what last night's dinner looked like before I put it in the oven. 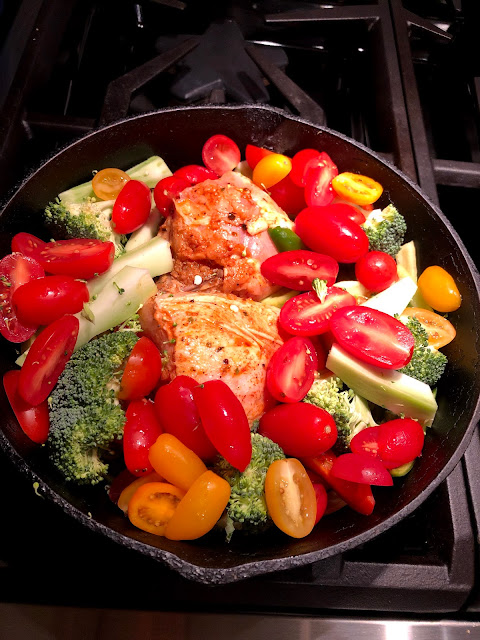 Now isn't that pretty?
I better start eating some leftovers because they're piling up in the refrigerator. I put a chicken pot pie in the freezer today because I'd never forgive myself if it went bad before I could eat it. I would weep from sorrow.
But tonight- salmon and a lovely salad.
Here's a zinnia. 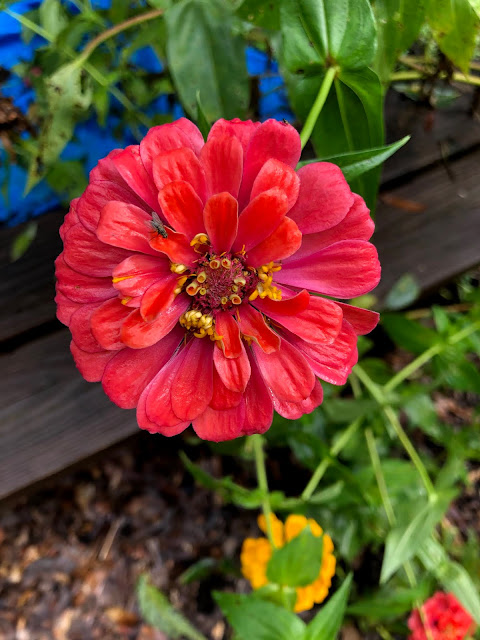 And a bug. I just saw a hummingbird on the firespike.
Love...Ms. Moon