The Passing Of Time, The Respectful Maintenance Of The Beloved 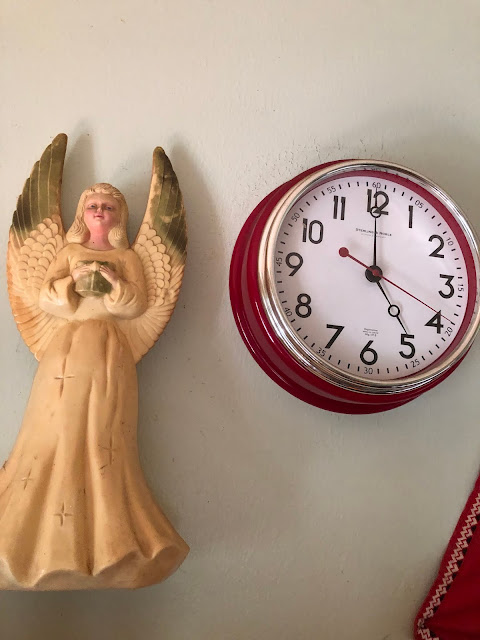 Kitchen Decor
Oh, Sundays.
Even when they aren't terrible, they can hold a sort of heaviness that mashes down the soul, can't they? Even on the brightest, most beautiful of fall days, Sundays can bring their own darkness.
I think that knowing that "real" life begins again the next day has something to do with the somberness of a Sunday, even if we don't go to a regular job. It's a holdover from when we did or even when we were in school, just as there are the those days in late summer, early fall, when we feel compelled to go buy new notebooks and pencils, pens, and folders, saddle shoes and a few brand new dresses.
Well, you know what I mean.
But Sundays- did you get your homework done? Oh god. I hope there's not a quiz in algebra tomorrow.
Tomorrow I have my appointment with the surgeon who did my appendectomy. I was so hoping that my really very overall positive experience with the medical establishment would help me get over my neurosis when it comes to all things doctor and medical.
I am afraid that it hasn't.
I dread going to the appointment although I think he's going to tell me that everything looks good. The appointment was supposed to be made for three weeks post surgery but when I called to make the appointment, tomorrow is the date the receptionist gave me even though it will only have been two weeks and two days. I did point this out to the lady and she got a bit defensively flustered and insisted that this date would be fine.
Whatever.
But if the doctor says anything about it, I'm throwing her under the bus.
So that's probably been a niggling worry in my mind, part of the heaviness I've felt.
Look what I got at the dump today! 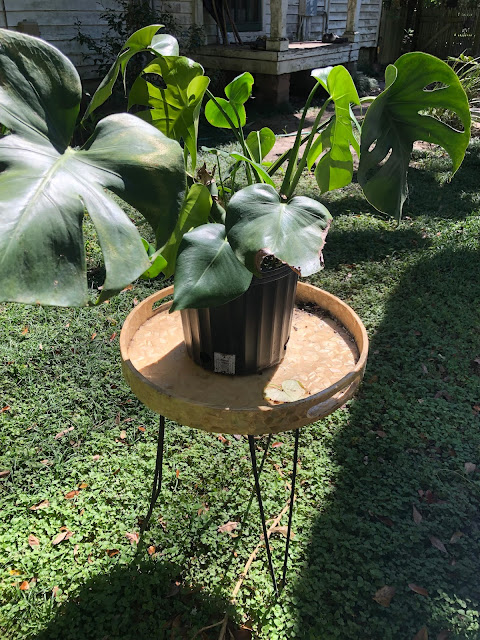 When I took my trash, there it was, a monstera deliciosa, just sitting there on that plant stand. I asked the attendant if the plant was up for taking and he said it was and why not take the stand too?
The stand isn't much and I didn't really feel a great need for it but I do like to put my plants on stands when I can due to the fact that my chickens love to nibble and sometimes devour my potted plants. Especially begonias and maiden hair ferns.
Two of my favorites, of course.
So I took it and the plant and when I got home, I separated three different parts of the monstera, put two in new pots and am rooting the third. Wish me luck. I've got the fairly lame plant stand on the kitchen porch with some hen and chick plants that I've had in pots on the back porch where they have not gotten enough sun, along with some potted up Swedish Ivy that I've rooted, and the rooting monstera. 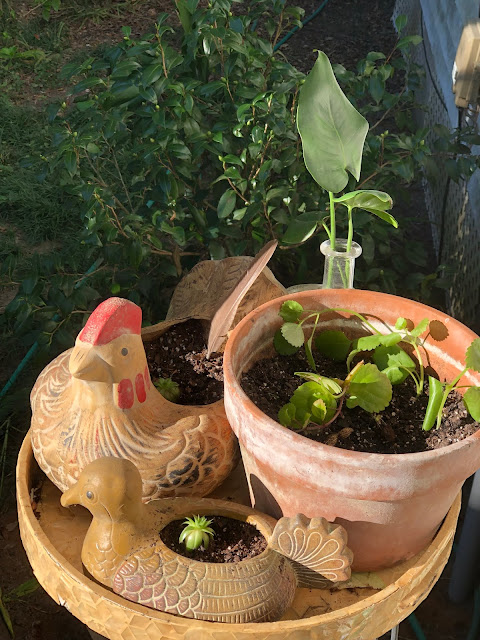 It may get too much sun there this winter as the bananas die back and the pecan trees lose all their leaves. We'll see. I've noticed that when one new plant moves in, or one rooted plant gets potted, everything has to shift and move around. It's like that thing where if you change out the doilies on an end table, before you know it you're refinishing the piano and putting in new windows.
Which is why I usually don't get new plants anymore or change out doilies either. I'm too old for that sort of craziness. But I simply could not pass up that plant at the dump and I plan on sharing it with some of the plant lovers in my family as it takes root and multiplies.

Another thing I did was finish watching "The Dressmaker" which both May and Jessie recommended. Now I am recommending it too. It's...strange. And rather lovely. Kate Winslet. Set in Australia. While I was watching, I was also working on the endless patching I'm doing on a very old and faded dress that I adore. I wore it to at least four and maybe five of my grandchildren's births. 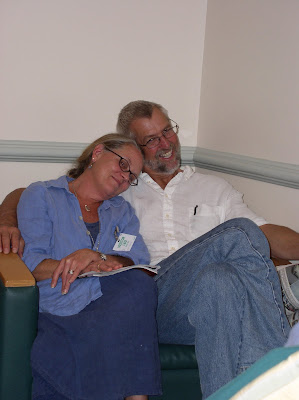 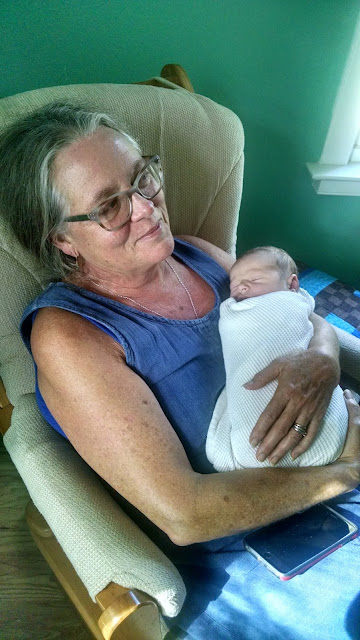 I got it at a Goodwill to begin with- blue linen- and it's so worn now that in many places it is as thin and insubstantial as a peacefully sleeping newborn's breath, a fragile, faded gauze. I'm doing a sort of wabi-sabi mending which is an intentionally visible mending meant to be imperfect which- you know- is absolutely perfect for me. Mostly I am doing it merely to preserve this old, adored dress while at the same time, letting me entertain myself with embroidery thread and a needle. 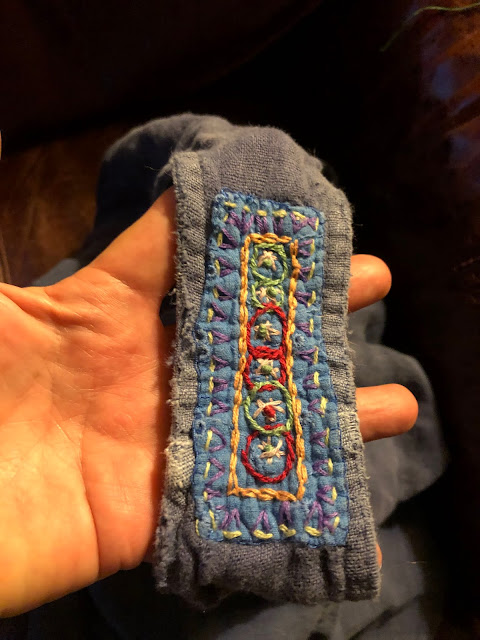 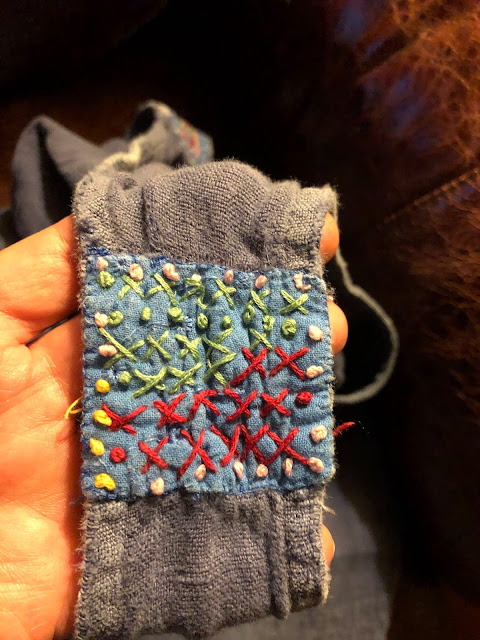 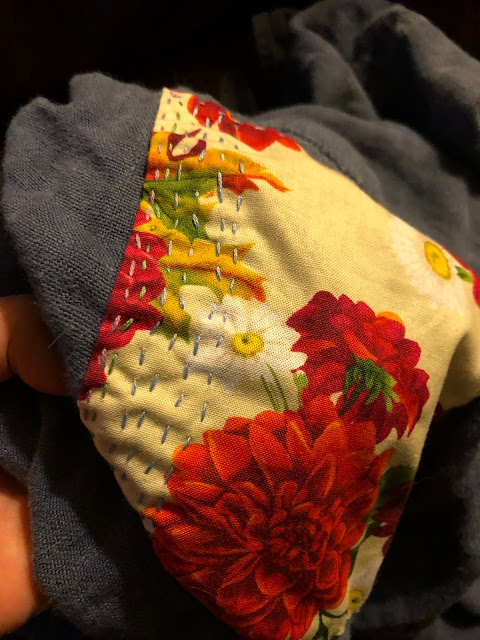 This is the bit I'm working on right now and no, I cannot sew a straight line. 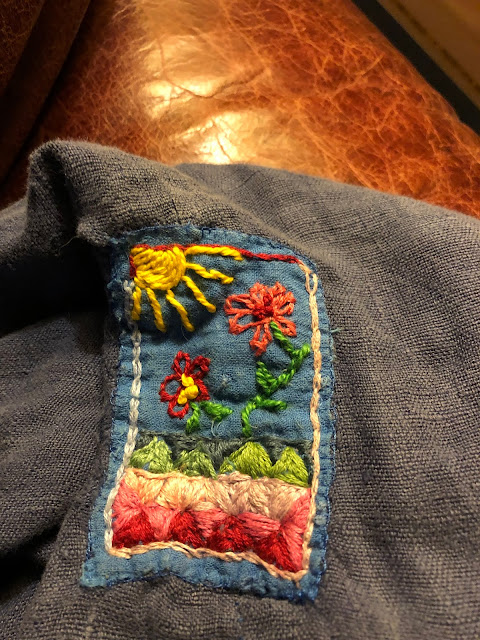 So that's fun and then I went out and pulled a few weeds. Next week we have got to get the fall/winter garden in. The volunteer sweet potatoes are doing their thing which I love to see every year. 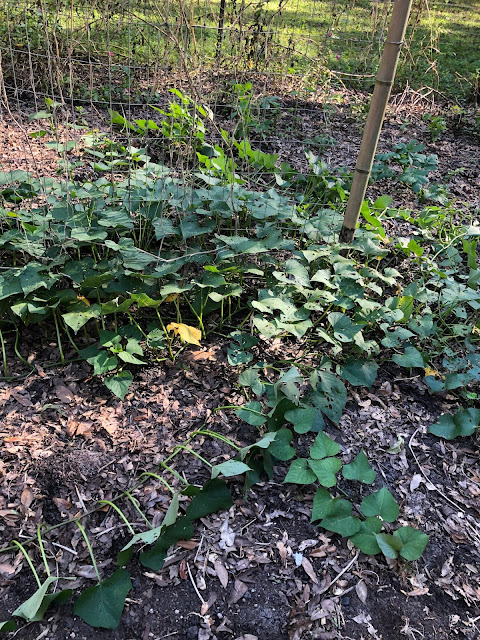 The gift that keeps on giving.
Big News!
Mr. Moon wrote me today that he is thinking they will be home tomorrow night.
Man. That's some fast traveling.
I'm pretty excited. I wish I'd gotten a little more done while he was gone like clearing out more of the garden and mopping the kitchen but the sheets are clean on his side of the bed and his wife still loves him very, very much. The cats and chickens are all alive, there will be good meals to eat, and many hugs and kisses to give and receive.
That'll do, right? Like wabi-sabi, imperfect but done with love and intention.
Love...Ms. Moon
Posted by Ms. Moon at 6:33 PM