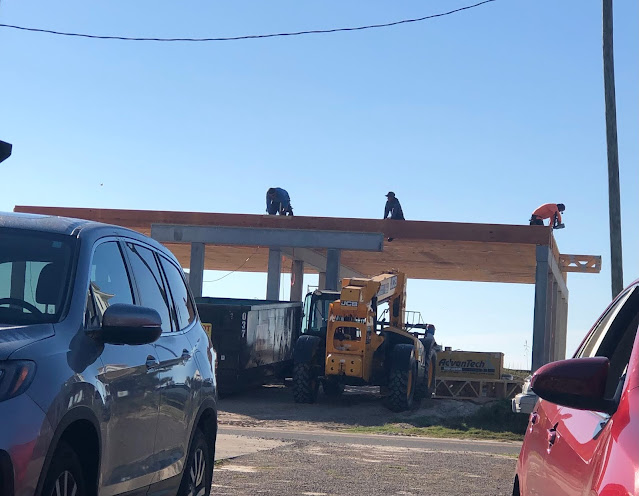 When I booked this place to stay via VRBO, I knew it was across the street from the beach but it's a very small street and not busy at all and one of the pictures in the listening showed a bare lot with two lovely sand trails through the dunes to the beach. Easy, easy access.
However, in updated reality, there is a new house going up on the lot and of course a crew was there working at about seven this morning but honestly, they've been so cheerful, joking and singing as they work that it's almost been a pleasure having them there.
It is now six o'clock and I think they've just quit work.
And there is a public beach access just two houses down so it's not a huge deal but on top of yesterday's problem with our "host" I'm feeling a little bit snitty about him.

We went to the Mexican restaurant/American breakfast place in Eastpoint for our breakfast this morning and we lounged around some and then went to Apalachicola, crossing first the bridge from the island to the mainland and then the bridge across the Apalachicola river estuary. Apalach is filled with tourists these days. Filled. It is not the same tiny fishing village it was thirty years ago and that's for sure. I did a little shopping- for some bizarre reason, both Mr. Moon and I came away without hats and the sun is so bright that a hat is as necessary as underwear and far more useful. Mr. Moon got a sort of straw cowboy hat at the building supply store in Eastpoint when he walked over from the restaurant to say hey to the owner who is a long-time friend of his. I just wanted a damn ball hat with a good brim but was having a ridiculously hard time finding one. The beach store on the island only sells tie-dyed ones this year which I do not want and I'd be very happy with a hat from the Piggly Wiggly but they want $19.50 for a damn hat that says "Piggly Wiggly" on it and no, I am not paying that.
I finally found one in Apalach for ten bucks and it's blue and says, "Blues in the Lot" which is a thing they were doing for awhile with music in some parking lot and I didn't even try it on when I found it but just bought it. It's fine. It's lovely. It keeps the sun out of my eyes.

I went to River Lily (best little shop in the entire Northwest Florida/South Georgia area) and did not buy one thing. I went to the Grady Market and they no longer appear to carry Johnny Was stuff so that was a bust. However, the book store was another matter. I ended up buying Colson Whitehead's "Harlem Shuffle" and Francine Prose's "The Vixen." Also, some yarn and a bamboo crochet hook which I need like I need a sandspur up my nose but something comes over me in that bookstore and I cannot stop myself. I was so very glad to see the store owner and we had a little chat and I ended up crying when she told me about the send off that Apalachicola gave a woman named Tamera who died about a year ago. She was beloved, was from Venezuela, ran a very cool coffee shop and a restaurant. A raging liberal, a beautiful woman whom I always had hoped to be a friend of one day.
So. There was that.

And then we went to the crazy Hole in the Wall oyster bar and it was as insane as ever and I have many, many thoughts about that experience. Perhaps someday I'll share some of them. It would be an entire post's worth of thoughts so I won't dip into them here.

This small part of the world seems to have a magnetic hold on many different types of humans. Some from as far away as Venezuela, some whose families go back generations living in this rather isolated part of north Florida where the sea and a river meet, where so many hurricanes seem to head directly when they've powered up to full power over the gulf, and where people from all over the world now visit and fall at least slightly in love with the charm and fucking weirdness of it all.
And I am one of those people. 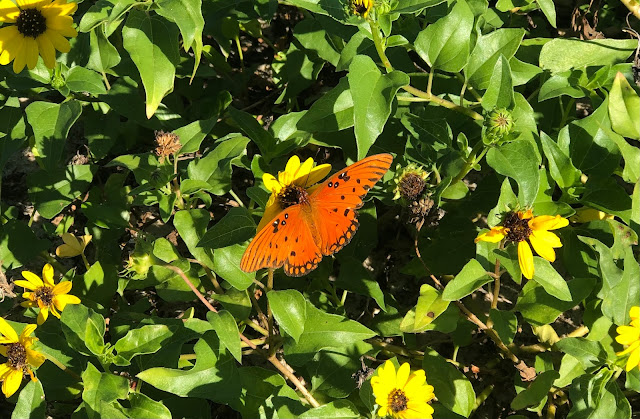 Gulf Coast Fritillary. There are thousands of them here now. 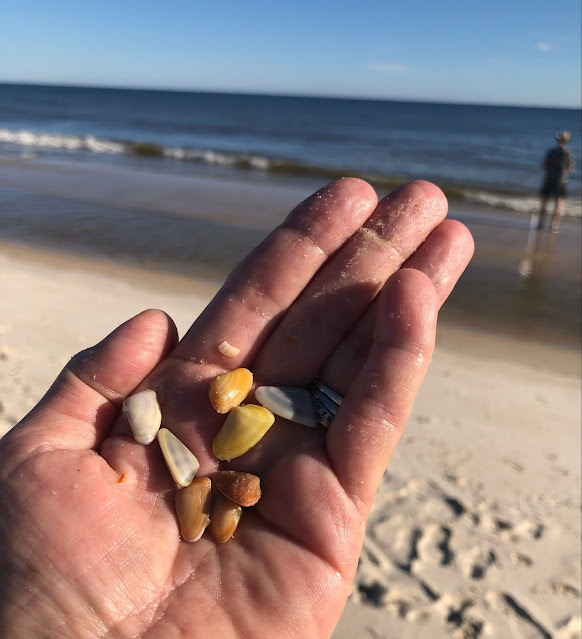 Coquinas or periwinkles. Either name will do. Tiny colorful clam-like creatures who ride in on the waves and bury themselves in the sand before you can blink an eye. We went down to the beach with all the beach stuff- chairs, towels, books, water, umbrella, fishing equipment, etc. and we set it all up only to discover that black biting flies were a torment and the water is muddy with silt.
We managed to stay for about half an hour and then gave it up and hauled it all back to the room.
Sigh.
And then comes sunset, the flies disappear, and a bird becomes a sort of companion on a walk beside the gulf. 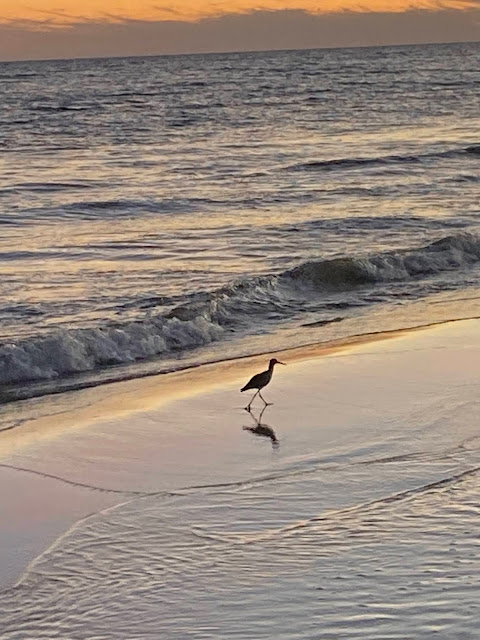