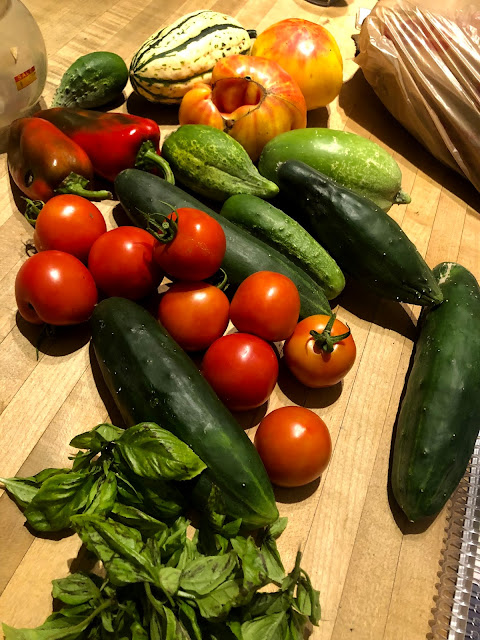 We are home.
So far we've unloaded the car and I started a load of laundry and besides that we've mostly wandered around the yard a little, picked a few things in the garden, and wondered where Darla and her bebes are. No sign of them anywhere although Hank and Rachel saw them this morning so they must be around somewhere. I can't think of anything that would take out all of them without leaving a sign.

It's good to be home although we had a great time and we've already been talking about the boys and the funny things they said and did. Levon has started saying, "Or not," in a completely appropriate way and that's our new catchphrase.
"Maybe we should eat there for lunch."
"Or not."

The child said it to me at two in the morning when he got out of bed and I went to tuck him back in and I wanted to put his head in one place saying, "Lay down here, baby."
"Or not," he said, as he laid down with his head where he wanted it. 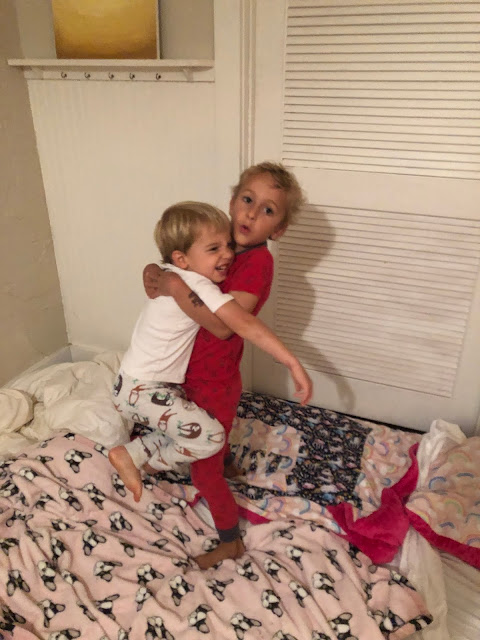 Oh, it's good to be home. It's raining gently and I'm on my back porch and I do so love my old house. The house we stayed in on Black Mountain was a fine house but we never did feel comfortable there and I can't even tell you why. It was just odd somehow. I kept getting disoriented and it wasn't that big. The kitchen was adequate and the knives there were even sharp which is a big deal to me. I cooked a few fine meals in it. But Mr. Moon had trouble sleeping and I ended up sleeping in the basement bedroom a lot so that he didn't worry about waking me up and I wasn't snoring right in his face and I did enjoy sleeping in that cozy space but still- it didn't feel quite right.
But now we're back in the best nest.
For us.

We took two days to make our way home. We actually bought an atlas of the United States- a book of real paper maps- and Mr. Moon traced us out routes on the small roads and we just meandered. Last night wasn't great. We were tired and ready to get supper and go to bed and were in a small town in Georgia called Greensboro and ended up at a Quality Inn which was a huge misnomer if there ever was one. The room smelled of a strange mixture of tobacco, urine, and whatever horrible product they'd used to try and cover it all up with. We found detritus on the floors and a roach (the kind you smoke) on the bathroom counter and the bedside tables were filthy.
I didn't even want to take my shoes off in that room but what can you do?
I went online later to read reviews people had left for Quality Inns, all fired up about the review I was going to leave but after I'd read some of the ones posted I thought, "What the hell? No bloodstains on the walls here. I guess we're okay!"
And there was a Waffle House right across the parking lot so there was that.
We found a restaurant a few miles away where we had one of the best meals we had on the whole trip. Mr. Moon got a steak, I got an ahi tuna salad, and the bread came with an incredible smoked sun-dried tomato concoction that I must figure out how to make. Plus, the martinis we ordered were generous and delicious so we slept quite well in the nasty-ish room, got up, had breakfast at the Waffle House and got on our way.
And there's an entire story about that Waffle House but I won't take the time to tell it now. I'll just say that the crew there affected me profoundly and I felt deeply that I would never be as good a human being as any of them were.
I read "Streets of Laredo" out loud to my husband as he drove unless we were passing through the little towns where there were beautiful old houses, both plantation style, and cracker style that I wanted to see. There were miles of pasture and forest, miles of planted fields of cotton and corn. Pretty creeks and large lakes, little Southern towns with magnificent City Halls dating back to the 1890's, downtowns that bustled and downtowns that were swiftly dying. In Elberton, Georgia, we came across an old car show in the downtown square so we stopped and parked and walked around. A sweet surprise, especially for Mr. Moon of course. 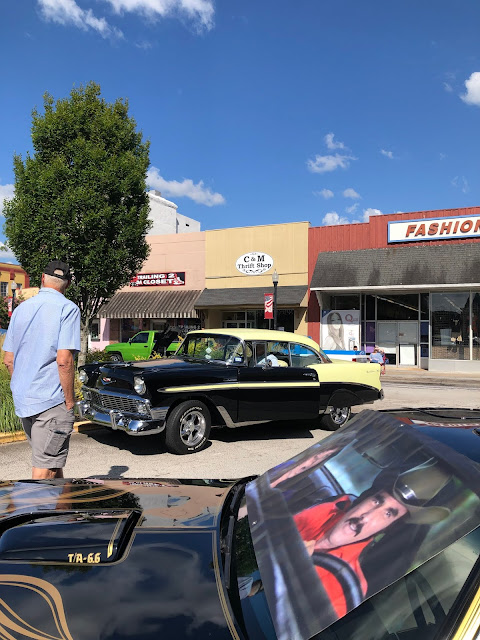 Today we drove through another town in Georgia called Fitzgerald. Never heard of it in my life. We passed a place downtown that I had to stop and take a picture of. An old theater? I do not know. It's filled with old stuff now. Building materials and old furniture. I have no idea but it's certainly not a going concern. 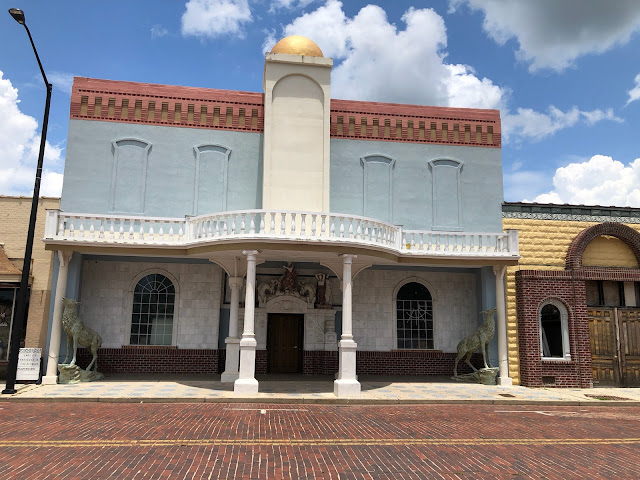 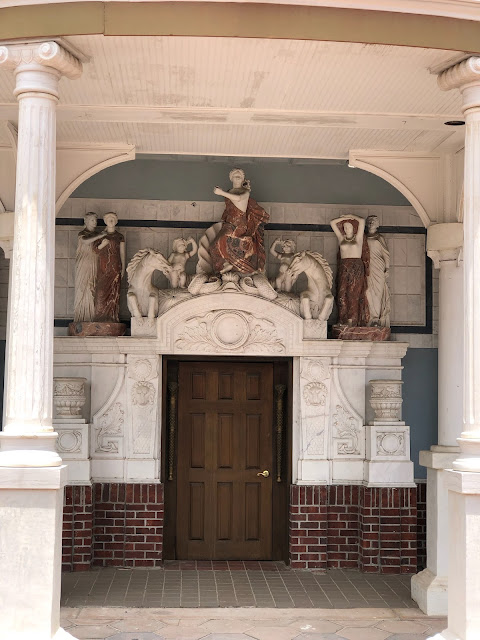 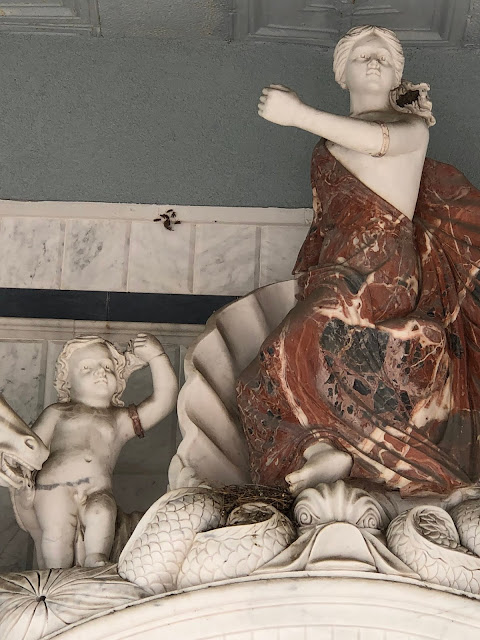 Can you see the wasp nest and bird nest?
The little town was fascinating. All of the downtown architecture was amazing.
We were hungry and looked online for a place to eat. We discovered a restaurant called something like "Soul Food" and followed the directions to find that the name of the restaurant had changed to "Flossie's Country Kitchen". The outside was not very fancy. 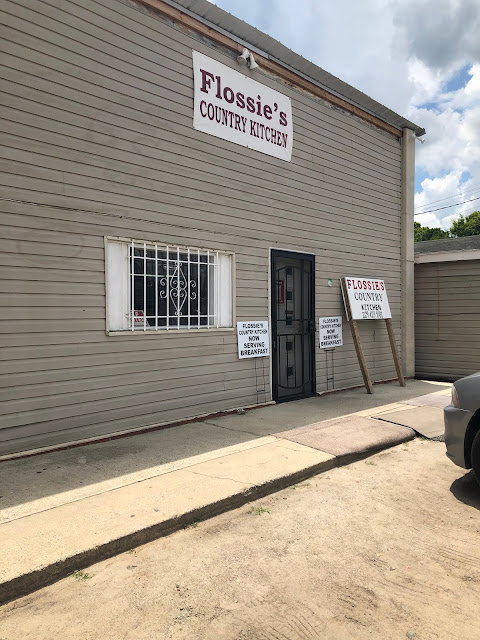 Neither was the inside. But we stayed and I'm glad we did.

Don't Worry Bout It. Pray Bout It.
That lady behind the steam table was serving up delicious food. I suppose she was Flossie. 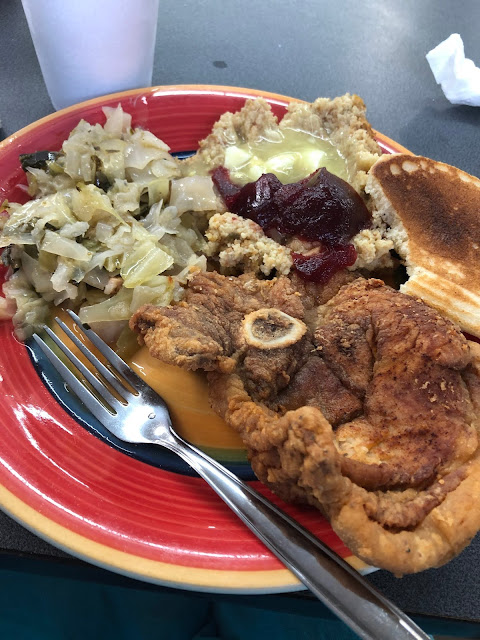 That's a pork chop, cabbage, and (be still my heart) cornbread dressing with giblet gravy and cranberry sauce.
And then on we drove through more fields and forests until we finally got to Lloyd.
OH! We stopped again in another tiny Georgia town called Barney (I am not making this up) where we stood in line to get peach ice cream and Mr. Moon bought this. 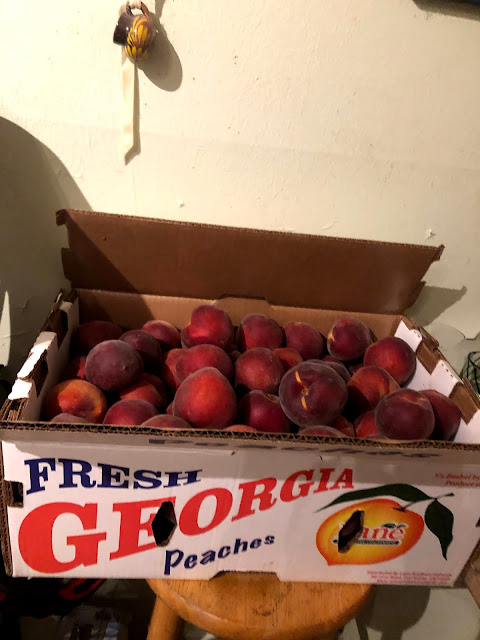 "Honey!" I wailed. What am I going to do with all of those peaches?
"Don't worry," he said. "We'll freeze them."
Oh Lord. We'll give a bunch away. Lily and I can both make preserves and maybe I can make some pickled peaches.
Maurice and Jack seem to be extremely glad we're back. Maurice won't quit meowing at us and I feel certain she's expressing deep unhappiness that we left her. Dottie is brooding. She's sitting flat as a pancake on five eggs. I just went and checked and Darla and the young'uns haven't showed up. I'm beginning to worry a bit. I suppose I better go unpack some stuff. My mind is so full of so many images and so many emotions and so many thoughts. Travel is good for us that way.
It was wonderful to see the Weatherfords and experience a little of what their life is like on the mountain. To get to read books to the boys and chat with them. They'll be back to Florida soon. School will be starting up. August will be in kindergarten, Levon in preschool. I told August that he might learn to read this year and then I asked Levon what he thought he might learn in school.
"How to drive a track-hoe," he said with all the solemnity that a three-year old can muster. Which is far more than you would think.
I fear that he is going to be vastly disappointed to find that Temple Israel does not offer track-hoe operating instructions in their preschool program.
Mr. Moon and I are going to keep that atlas and plan the road trip across the US that we've been talking about forever. We are good traveling buddies and we make each other laugh a lot. There are so many things to see and to do and so many stories to hear. And Larry McMurtry's Lonesome Dove series is long enough for many, many thousands of miles of reading and listening.
We will not, however, be staying at any Quality Inns. Trust me.
I've missed you all.
Love...Ms. Moon 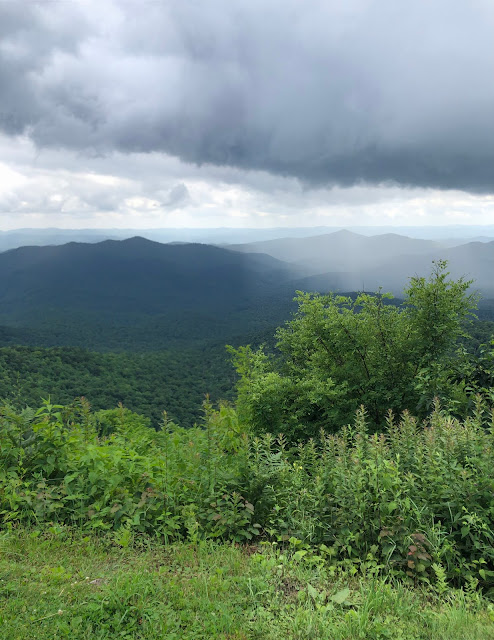 View From The Pisgah Inn, North Carolina
Posted by Ms. Moon at 7:59 PM