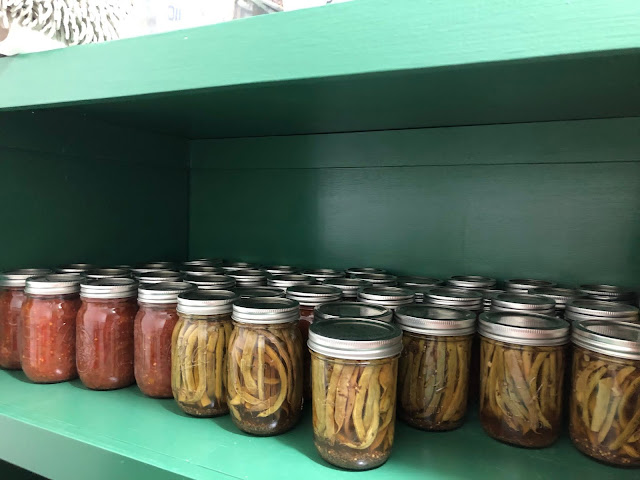 I sent that picture to Lily last night.
"Pint by pint," I said.
And that's just what I've put up this summer so far. Could be about the last of it too, considering that we'll be gone for a week and the garden could die of neglect, bugs, and heat by the time we return. I'm looking forward though, to a week where I can't possibly do any preserving despite the fact that I do mostly enjoy it and looking at my jars lined up so nicely gives me a great deal of pleasure.

Today was rather frustrating. I kept trying to call Costco to see if my glasses were in but no one answered the phone so I finally decided to just go into town. Now it's not that big of a deal to go to Costco and Publix because they're on "my" side of town which is the east side of Tallahassee so there's not a whole lot of traffic to deal with. And I wanted to take Lily some beans and eggs and same for Hank and Rachel whose neighborhood is practically across the street from Costco. And I wanted more canning jars and Mr. Moon needed the pills he takes for his leg cramps and so off I went. Rachel had to shop at Costco too so we met and I gave her the produce and then we went in the store and no, my glasses were not ready.
"But y'all said a week to ten days!" I said to the lady behind the counter. "It's been eleven!" I knew I sounded ridiculous, like a whiny child saying, "It's not fair!"
Somehow I couldn't stop myself. I want to get those glasses and get this process of adjustment started.
I felt even more ridiculous when I actually counted up the days since I ordered them and came up with nine, not eleven.
Sheesh.
Oh well. So I got some more apple cider vinegar and Rachel got what she needed and we checked out and then I went to the liquor store where the beautiful lady who loves August was working today. I asked her if her daughter had moved into her own place yet. She made a face and said, "No. And that's a long story for another time."

I hope to hear it because I do love a story.

I had dropped off Lily's beans and eggs at her Publix which is where I usually shop because she was there working but I wanted to do my shopping at the Publix by Costco because they usually have the cramp pills while "my" Publix doesn't. So, off to Publix #2 I went.
They had no pint jars, only quarts. I don't want quarts. And no cramp pills either.
I felt so frustrated. And hungry. I got some sushi. I am not a sushi snob. Grocery store sushi is fine with me. At least that Publix has its own sushi chefs. Are they called chefs? I don't know.
Spicy tuna rolls.
I decided to re-hit the Publix where Lily works on my way home to see if they had pint jars. While I'd been in the other Publix, it had begun to pour rain. I got drenched getting to my car. I didn't care. I sat there in my own little Prius world for awhile, eating my sushi. It was delicious.
Of course Lily's (and my) Publix had no pint jars. Well, damn. Who knew the entire world has taken up canning?
Oh well. I got to see Rachel and Lily today so all was not lost.
I got drenched coming out of the second Publix too.
Yeah, I should get an umbrella. I live in a rain forest.

When I got home I started a roux for gumbo and made up the dough for a loaf of bread. I had finally gotten enough okra pods from the garden to make that worthwhile and it's simmering now. I'm pretty excited. It's got our own peppers, okra, and garlic in it as well as some of Mr. Moon's wild pig and also venison sausage. The shrimp came from Costco but at least it's wild shrimp. I'd rather go shrimpless than eat the stuff they farm.

The sun has come back out. My gumbo smells like funky heaven, and all is pretty right with the world.

Here's some more zinnias. These are in a vase. 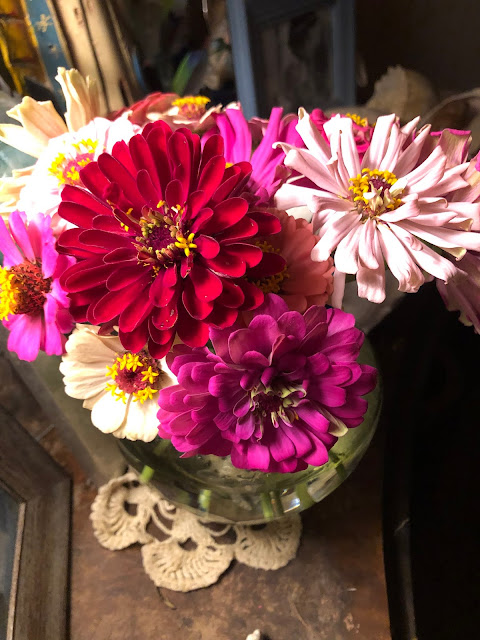