Okay. Well. When Mr. Moon's mother died in '91, I think it was, his daddy and my mother who barely knew each other, decided to get married. My mother had been married twice, both times to men it would have been far better had she not married (to put it mildly) and I say that knowing that none of my siblings nor me would have been born if she hadn't. So what? We wouldn't have known the difference.
But Glen's daddy was a jewel and one of the finest men I ever met and he and Glen's mama had been married for many, many years before she died. Their love story was a beautiful one. They met via correspondence when he was overseas in the war and when they met in real life, it didn't take long at all for them to hotfoot it to wherever it was they got married, get it done, and get on a bus in Utah where Grammy lived and head to Tennessee where Paw-Paw was from, to live in Bug Tussle, the crook in the road where Mammy lived and where Paw-Paw was raised.
There is more to the story, of course, and the adjustment period for Glen's mother was a hard one. She was not a country girl and suddenly she was faced with the harsh reality of a farm life with very few conveniences, no luxuries, and a mother-in-law who was as strong willed and determined as any woman ever born.
This is all to say that Glen's dad made up his mind quickly and did not mess around when it came to picking brides and for his second one, he picked my mother.
It was all fairly odd. Of course we wanted them both to be happy but as I told my therapist, "WILL THE INCEST NEVER END?" And yes, we thought about all of the different results of the union. We would be step-siblings, our in-laws would also be our real parents, oh god, I don't know. It went on and on.
But they were happy and made a sweet little life together which did not last very long at all because within a month of their marriage, Paw-Paw was diagnosed with a cancer that would kill him within six months.
And it did.
So that was a rather weird and very, very hard time in all of our lives, as you could imagine.
I don't think my mother ever got over it. She was angry that what had appeared to be her one shot of happiness was so quickly shot down. I believe she became somewhat resentful about my marriage- why had I been so lucky when she had not?
And I understand that. But it didn't help the relationship between us.
I often wonder if my mother and Paw-Paw would have continued to be happy together. They were so very different in every way, but I suppose that Glen and I are too and we've managed to make that work.

So that's the story. Or at least a brief version of it. Just another adventure in this crazy thing we call life, I suppose.

You will not be surprised to hear that I am not entirely packed yet. I've thrown all my linen dresses in a suitcase and have enough underwear for a week and a bathing suit and two pairs of overalls and two sweaters. That's enough, right? Maybe I'll throw a bra in there. Or a bra-like garment. You know me.
I did cross everything off my to-do list and was miffed that I had forgotten to write down "clean hen house" and was tempted to add it after the fact just for the great pleasure of crossing it off but I'm not that ridiculous. While trying to sweep and tidy up I was vastly dismayed to finally see how dusty my house is, visualizing it through the eyes of whoever may have to be the one to come in and deal with everything if we die on the highway or fall off a mountain or eat a bad oyster or something.
Lily and the kids came over for a good-bye visit. They are heading over to Lauren's parents' house on Monday for a little vacation which is like the best thing in the world as Lauren's parents spoil them with sweet abandon, have several refrigerators full of delicious foods, a pool, a river to fish in, and...best of all...many wonderful domestic and farm animals to play with!
It's like a resort, spa, and farm all in one. 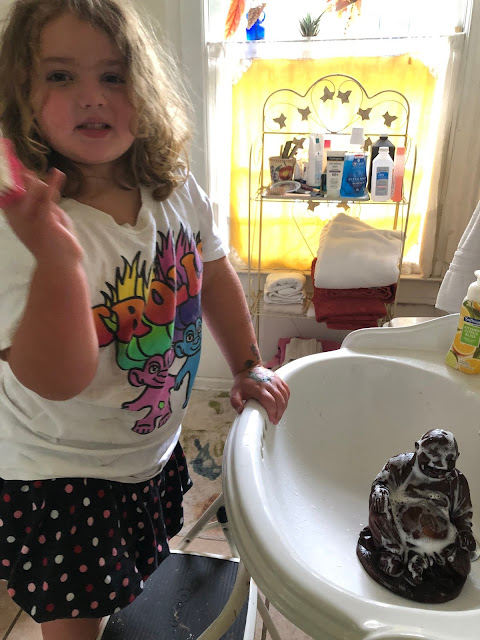 But do they have a Buddha to wash?
Probably.

I am excited for us to get on the road tomorrow. We'll only be driving as far as Athens for the first leg of our journey and are going to spend the night at the very sweet and pretty darn cool hotel called The Graduate. While we drive I will be reading aloud to Mr. Moon as is our tradition. He is reading, with his eyes, McMurtry's Dead Man's Walk which I did just read last month but I am going to supplement his reading of it as we go. I am halfway through the very last book of the Lonesome Dove series and am pre-grieving. I am trying to make it last. So it will actually be a huge pleasure to dip back into the beginning of the stories that have kept me awake too long for many nights. And we can talk about it as we go.

That's it for tonight. I will be posting from the road most likely and from North Carolina. The place we're staying supposedly has wifi. It better. I may not, however, get around to commenting on blogs but I'm pretty sure I'll be reading them.

P.S. I boiled the peanuts. They are pretty good.