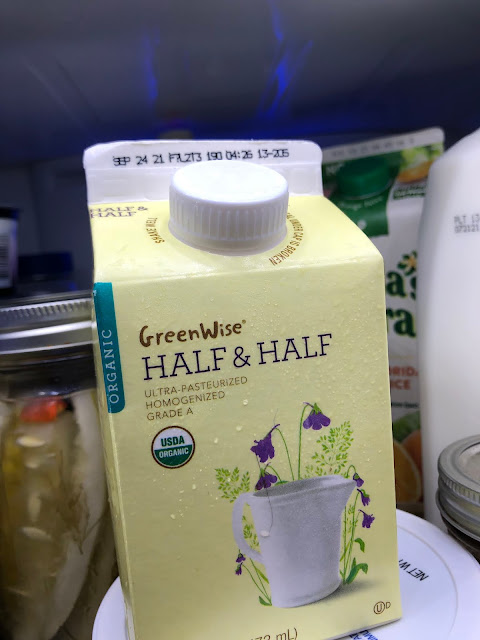 Those of you who know me may know what this picture signifies.

Oh my goodness. She and Lon are house and dog-sitting for Lon's sister and brother-in-law who have a home in Monticello. This is just an unbelievably delicious treat. A sort of dream come true. We've always fantasized about living next door to each other and although the house they're taking care of is not by anyone's definition next door, it is still close enough for me to have half & half in my refrigerator for Lis's coffee. I do need to point out that Lis herself bought the half & half when we...went to Publix together.

And that's all we've ever really wanted. To be able to do our shopping together, to have coffee together, and maybe go out for lunch now and then. Which we did today. Don't get me wrong- Lis and I have had many incredible adventures together. I mean, she's the one who made me go to Cuba with a group of musicians. An experience I never would have had without her and which I will never forget. And we've taken other trips together, closer to home, but which I will cherish the memories of forever and ever. But to have her close enough for a week to just hang out with is a beautiful and novel thing.

Tomorrow is my birthday and I am not sure how many of our birthdays we've spent together but more than a few. I remember the first time she ever baked me a birthday cake. Mr. Moon and I were in St. Augustine visiting some good friends of ours who had moved there from Tallahassee and were just starting to know the folks who lived in that magical little town. And Lis and Lon were the best friends of the people we were visiting. I barely knew them at all but they were the kindest, sweetest people and I think we went to hear them play and it was my birthday and Lis made me a cake.
It was, I think, a Mississippi mud cake with banana. Nirvana was achieved in my mouth and I kept thinking, "She's so nice!"

And we've gone on from there for many, many years. Of course we originally bonded when the lady of the couple we were visiting in St. Augustine still lived in Tallahassee and invited a whole bunch of people over to my house after a gig of Lon and Lis's. I had an entire houseful of people coming over and not one damn thing to offer them and Lis just came into the kitchen and together we made up an assortment of finger foods from what we now describe as catfood and crackers.
It wasn't really but it might as well have been.

And Lis is going to make us supper tomorrow night and bake me a cake. I gave her some snapper that Mr. Moon caught to thaw and the men are going to grill it for us. They have their own relationship and in fact, went to lunch in Monticello together today.

So I'm a happy girl on this, the eve of my 67th birthday. I have absolutely the least interest in my birthday this year that I've ever had and that's saying a lot. I'm hoping that after Jessie gets home (next Sunday!) that the whole family can go to the river for a little swim and celebration. That would make me terrifically happy. It's not that I'm not thrilled to have completed another year of life, it's just that, well, I've had sixty-six birthdays already so what's another one?

But we'll have a lovely evening tomorrow, I am sure, with the sweetest dearest friends anyone could have, and I have an entire week to chat and drink coffee and go on little adventures with Lis. Almost as if we were next-door neighbors.

I am such a lucky woman.