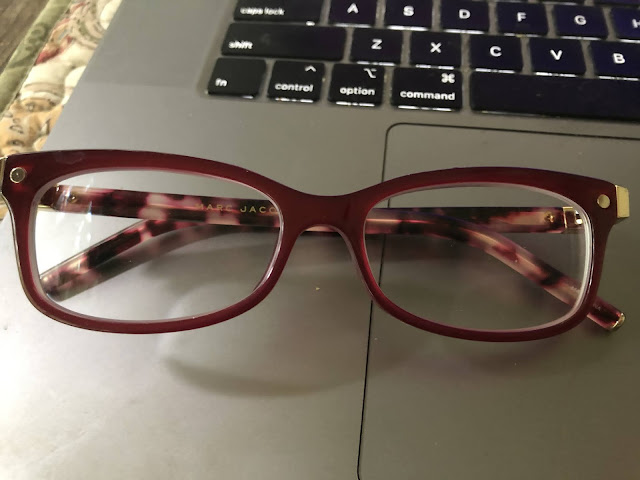 There you go. Red glasses.

Y'all were right, though. They didn't look so very red in that other picture and yet, they are.

I don't know what's wrong with me today. Maybe it's the weather. All that worry about the storm and we got less rain (and no wind) than we have been getting the past week. This is not to say it hasn't rained at all. It has. Just not very much.

So in the knowledge that I had two days now to get ready for the trip, I actually got out an old journal and made a list of things I needed to do before we left. And then I made pickles. 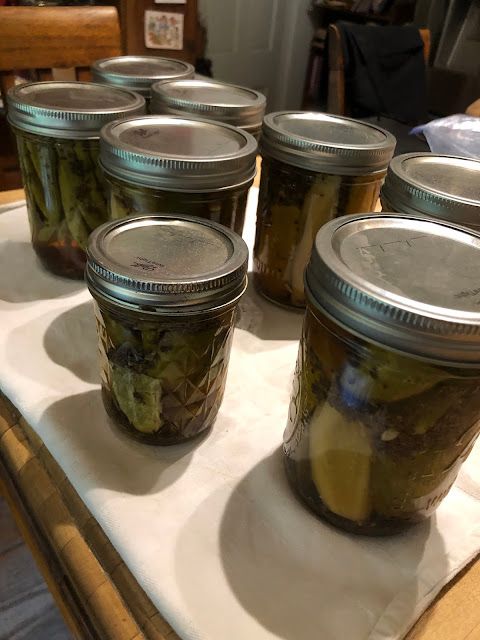 I made six and a half pints of dill pickles and one pint of dilly beans. There was no way I was going to let my cucumbers go to waste.
I also finished the dress I have been "working" on for about six months now. It's...okay to wear around the house. Nice pockets at least!
And I know I've done some other stuff but I don't know what. I packed some potatoes and a few pints of things I've canned to take to NC. I talked to Jessie and the boys. We discussed things we might do while we're up there. I was told that I do not need to bring the Mike Mulligan book because they have one of those at the cousins' house.
Check!
Meanwhile, while I was doing all of...whatever it was I was doing...Mr. Moon was shelling peas and then he decided to pack and in about half an hour he was entirely ready to go, clothing-wise, at least, and I haven't even started down that path.

About 3:30 I started feeling so tired that I eventually had to go lay down and take a nap. Like I said- maybe the weather?
I can't even imagine how tomorrow is going to go. I have so much I feel like I need to do before we leave including cleaning out the hen house and making sure the people house is in reasonable order and of course doing my own packing which is always ridiculously hard for me. I did get two new dresses that I like very much and that is cheering.
I'm so ridiculous. I always have to remember that none of this really matters because they sell everything in North Carolina that I could possibly forget or neglect to take.
Here's the best thing on my to-do list for tomorrow:
Boil peanuts.
Yep. I bought a bag of green peanuts at Publix to boil and take with us on the road. Is that just about the most southern thing you ever heard?
No. That would be when my mother married Glen's father.
As the lady in Costco said the other day, that's a long story for another time.
Okay. I will end this now but I do want to show you a picture that Lily sent around last night.
She had put Maggie in the tub and left her there for a few minutes with some red finger paint soap that Lauren's mother had given her and came back to find this. 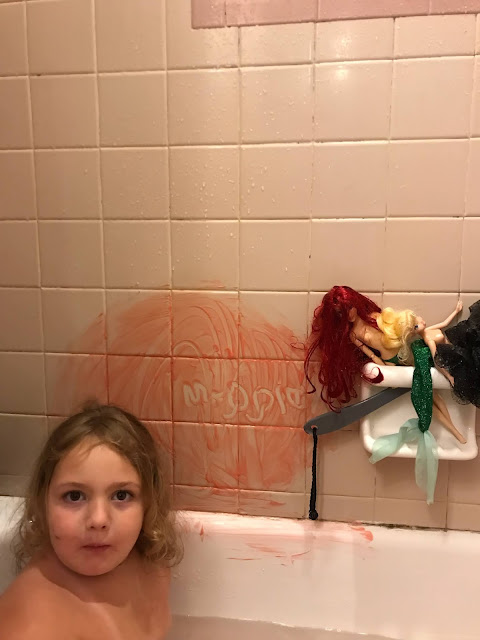 "Looks like she had a doll execution and then signed her name," Lily said.