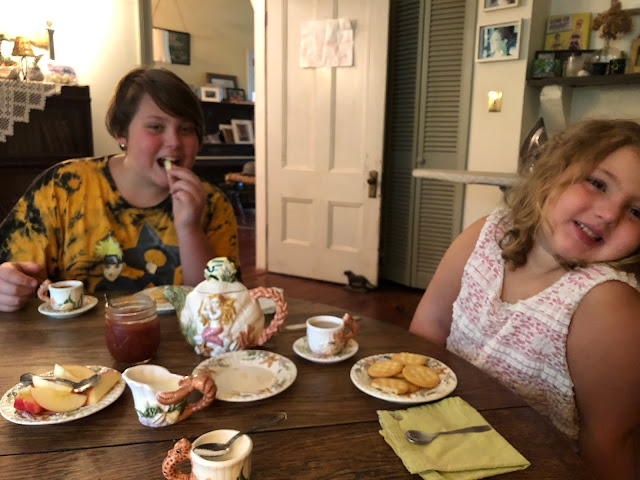 I had the pleasure of a visit from Owen and Maggie (or Magdelina, as Owen is calling her) today while Lily took Gibson to see the doctor. The child has been having random nosebleeds and although it's probably nothing, of course we have to make sure.

I had a wonderful time with the oldest and the youngest of that family. Maggie washed some more things and while she was at it, I told her that if she'd wash the mermaid tea set that lives in the library we could have a nice tea. She agreed happily and I even made a pot of decaffeinated chai and set out apple slices and Ritz crackers and peach preserves, milk, sugar, and tiny linen napkins and tiny little spoons, and tiny little butter knives.
It was lovely.
We discussed everything from how tea made its way to England, to where rice was first eaten, to memories of Owen giving me my grandmother name, to Maggie taking her first steps and we laughed and we drank tea and Maggie put peach preserves in her tea along with sugar and milk, and Mer did not care at all. Even when sugary, jammy tea got a little spilled and things got a sticky. 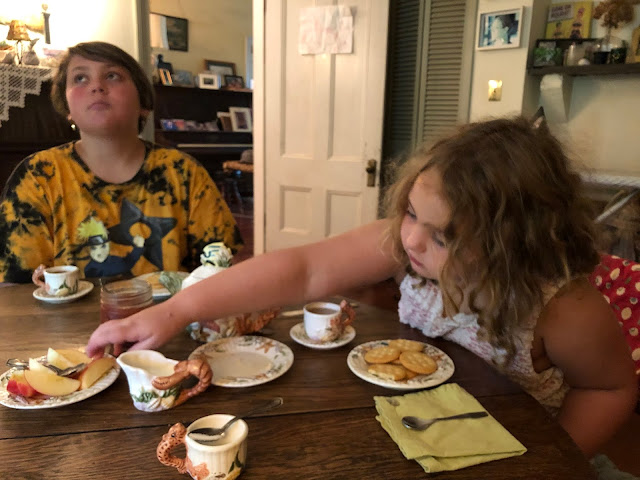 Before that, though, Owen showed me how to do a google image search from my phone which is so much quicker and easier than doing it on my computer. We were going all over the house image-searching interesting old things I have around here. I thanked him profusely for educating me on this aspect of my phone that I unaware of. He was very graceful about it and didn't shame me for not knowing how it worked. That boy is growing up so fast. We were talking in the kitchen about stuff and I told him that I know it's hard to imagine now but that Boppy and I used to be very good-looking people and he said something like, "No it's not. I'm looking at a good-looking lady right now," which I take to mean that he's already full of it but I loved him for saying that. And Maggie/Magnolia/Magdelina is such a sweetheart, telling me spontaneously that she loves me and thanking me for having them over.

It's been so damn hot that we stayed in the house but that was okay. No one brought up TV once and we really did have a merry time.
And then Lily and Gibson got back and of course they had had no idea at the doctor's office why Gibson might be having nosebleeds but they drew some blood and said that if nothing turns up, he should probably go see an ENT. Again- I think it's just a thing. Who among us did not present with odd and mysterious symptoms when we were young and then outgrew them? I know I did.

After they left I got the laundry off the line. Even though it's so hot, it's also so humid that I had to toss a few things in the dryer to finish them. I made up the bed with the line-dried sheets and put everything away and then Lon and Lis dropped by. Lis and I had coffee and then Mr. Moon got home from running a list of errands and I've been cooking a venison roast in the new pot for hours and hours at a very low heat and I'll do something with that in a few minutes.

Lis and I made a plan to meet in Monticello tomorrow where we're going to shop at Wag the Dog and a few fine antique and vintage shops and then have lunch.
What an unbelievable thing it is for us to be able to get together like this. It's like a dream. We went for over a year without seeing each other at all and at least for this moment in time, we feel safe enough around each other to get together, to eat, to chat, to shop. Things may change any day now although Florida's governor refuses to admit the need for lock-downs, masks, or any of the things we know help limit the spread of covid, even as the Delta variant is affecting and infecting so many, filling up our hospitals again. In the county that all of our kids live in, the school board is refusing to institute the mask policy for kids in school, even though the American Pediatric Society and the CDC recommend it, citing "medical freedom."
Medical freedom my ass.
Publix is re-instituting the mask policy for all employees, according to Lily but she is not sure if that will extend to customers. If it does, the roars of protest will be heard. You can trust me on that.

As someone said on FB the other day- I am so tired of stupid.
Me too.

But. Again - for this moment, we feel safe together and we're going to enjoy every bit of that we can.

And now it's time to go turn that venison roast into supper. Believe it or not, the green beans are done on the vine. I can't believe it. I imagine I'll be able to find something else to fulfill our vegetative needs. We still have a few tomatoes, one fine cucumber, some peppers, and there's a salad in there somewhere.

We do the best with what we have, do we not?