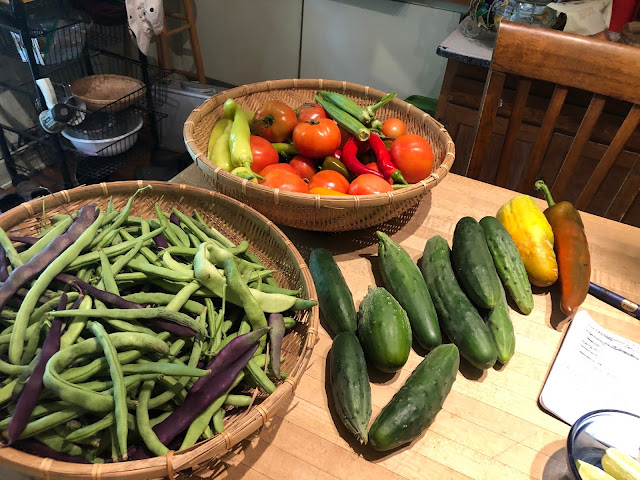 Are y'all getting tired of my vegetables yet?
Suddenly it would seem that the cucumbers have decided to LIVE like Frankenstein's Monster coming to full consciousness with that last bolt of thunder. Or electricity. I've never actually read the book.

One time, when Hank and May were still little and before their younger sisters were born, Mr. Moon took them fishing in a tiny pond in his little Jon boat. I don't remember what they were catching. Bream, most likely. But they had a good stringer full and somehow, they lost the fish. Gone. All gone.
And May, probably hot and tired, wailed at the loss. She cried and she said, "All that work!"
That has become one of our family's phrases. We use it often whenever something goes awry after much effort has been put into it. And I feel like saying it today.
Sigh.
After I picked the garden I was burning-up hot, as my friend Lynn used to say, and I'd gotten ant-bit so one of my feet was on fire and also, the bean leaves and the cucumber leaves and even the tomato leaves all have something in them that I react to and so besides being so sweaty that I'd pulled my dress up, exposing everything to god and anyone who might be watching (probably no one), to wipe the sweat from my face and having a foot on fire, I was itching everywhere too. But after I cooled off a bit I decided that I'd make some Moon Sauce which is a recipe that Glen's mother gave me and which I assume was her mother-in-law's recipe. I've posted this before, I think. 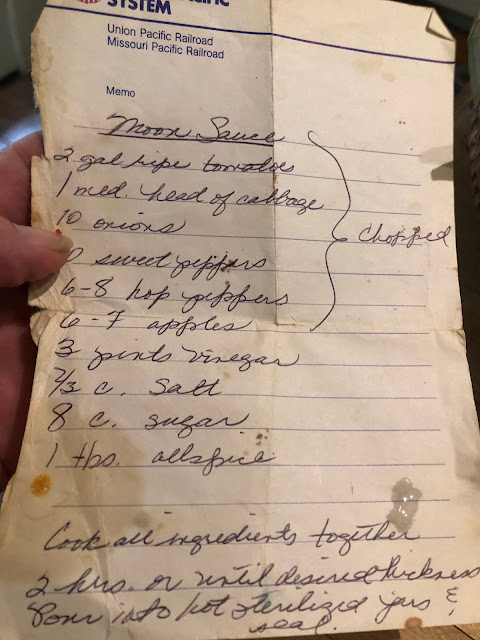 I've been wanting to make this for years but just never seemed to have all of the ingredients on hand at once but today, I did. The tomatoes and peppers and hot peppers (I think that's what "hop peppers" is supposed to say) and I had onions and cabbage and apples. So why not?
Thank goodness for the food processor. Even with that, it took at least an hour to put everything together after blanching the tomatoes to peel them and seeding the peppers and peeling the onions. You know.
I filled up my biggest pot and because the measurements were a big vague in the recipe, I had to sort of eyeball it all. How big were those ten onions? How hot were the peppers? So I just reduced things a bit, including the sugar- eight cups?- and the salt and the vinegar too. It all filled my huge pot 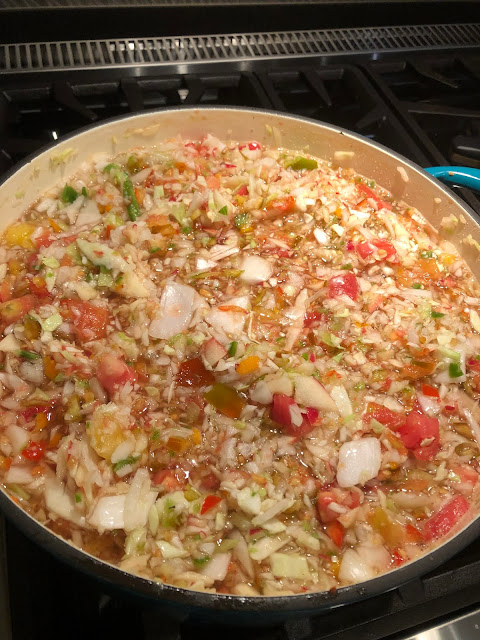 and I heated it to a boil and then simmered it without a lid for two hours to thicken it all. Because of all the sugar it didn't require as much cooking down as the chili sauce had or the salsa. Sugar is a beautiful thickener.
As I tasted though, I soon realized that the stuff had too much salt in it. And what in hell are you going to do about that? I've heard that raw potato in something with too much salt will take some of it out but it's never proven true for me. Also- who wants potato in their Moon Sauce? I could have added a lot more vegetables but the pot wasn't big enough for that and besides- I'd used up all the cabbage and the apples and most of the tomatoes. All of the ones I wanted to use in sauce. So, I just cooked it and then I canned it and I'll put a warning on the lids that no extra salt is needed for whatever you put it on. I got six pints and they look so pretty and the sauce smells so good but what can you do? 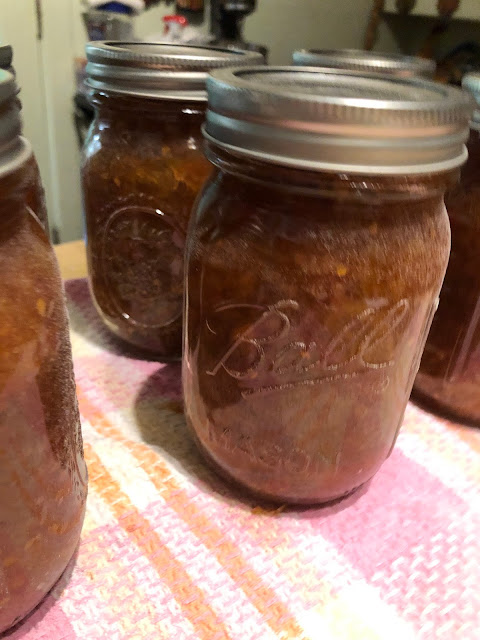 I have corrected the recipe by striking through the "2/3 cup of salt" and writing beside it "TOO MUCH!"
I knew it was too much and used far less, proportionately, than I did cutting back on the sugar.
Well, that's cooking.
This is a rather bitchy, whiney post, isn't it? I'm sorry. Just like May, I am hot and I am tired. Canning requires a lot of work and if I get nothing out of doing it besides realizing how strong and tough all our foremothers were, then that's enough. And they didn't can in an air conditioned kitchen. And they also had to water their gardens by hauling the water. And hell- they had to tote wood to heat their stoves. If their sauce was too salty they probably spit on the floor and said, "Eat it. It's fine."

Hurricane Elsa has been downgraded to a tropical storm which is good although it's still early days. I just read Rob Nucatola's latest post on FB and as always, he is the voice of reason and calm. The meteorologist that the Tallahassee Democrat uses for their articles about hurricanes is known as "The Weather Tiger" and his article in this morning's paper claimed that Elsa could become a category two or even three. He is an alarmist, selling papers.
I hope.

It's raining and the frogs are calling and in a week, good Lord willin' and the creek don't rise, we'll be in North Carolina hugging on the Weatherfords and I won't even have a thought to spare about sauce that is too salty.
No matter what that sauce tastes like, my husband came into the kitchen and said, "It smells like Moon Sauce in here." I never met his daddy's mother and I wish I had. From the stories I've heard, if there was ever a super woman, she was it. She was called "Mammy" and that name was always spoken with deep reverence.
I'm going to sleep good tonight. I hear that Mammy barely slept at all and spent her nights wallpapering the ceilings and making quilts. She was a far better woman than I'll ever be but I'm doing my best.
Love...Ms. Moon
Posted by Ms. Moon at 6:43 PM