Trying To Preserve Sanity In Such Strange Times

This morning was humid and gray and warm and I just wasn't feeling well.
Again.
Jessie texted and asked if Lily and I wanted to go to Monticello story time and I said that no, I just didn't think I felt like it.
And then I started thinking about how much fun we always have and how going to story time isn't really a huge physical challenge and how it would be good for me to get out instead of staying at home and dwelling on my own grayness on this gray day and so I texted back again, saying okay, I've changed my mind.
I'm glad I did.
Jessie and August and Levon picked me up. The boys both had books in front of their faces and didn't say a word to me which I understood because who wants to participate in niceties when one is immersed in a good book? They did, however, soon put their books down to ask me for gum. Jessie said, "Guys, Mer isn't a human gum dispenser."
"Well," I said. "I sort of am."
So gum was dispensed and we drove to Monticello to discover that Mr. Terez was dressed as the Cat In The Hat which made him about twelve feet tall and it was awesome. Jessie took my picture with him. 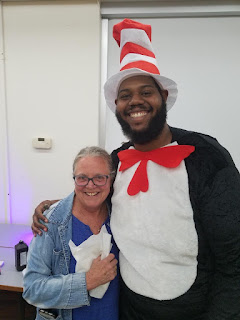 Isn't he precious?
He read the books today, instead of Ms. Courtney. We heard Green Eggs and Ham and Hop on Pop and also What Pet Should I Get?
You know, the classics.
There was a pretty good group of kids there today including the little redheaded girl that Mr. Terez calls Strawberry Shortcake who always has a look on her face like, "What is WRONG with you people? Why are you acting like CHILDREN?" She cracks me up. She's adorable. There were songs and shaky eggs and everyone except for Ms. Strawberry Shortcake was enthusiastic.
This child reminds me of me when I was a child. I never felt like a child. Maybe that's why I have such a good time doing childlike things now.
But the best was yet to come!
Today's activity was to make elephant toothpaste. Yep. That's what I said. Elephant toothpaste. It was a true scientific experiment! Everything was laid out and measured out and ready. Here are my scientists. 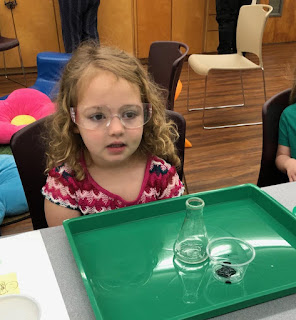 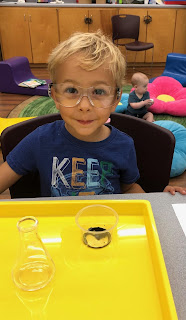 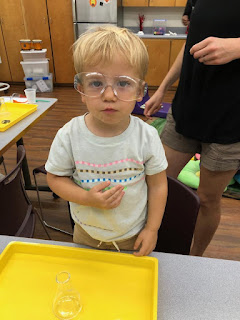 Things were poured and mixed. 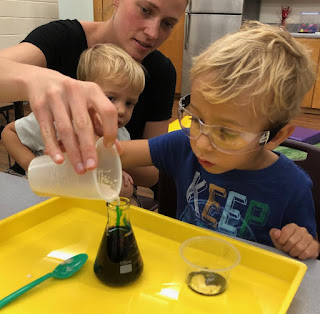 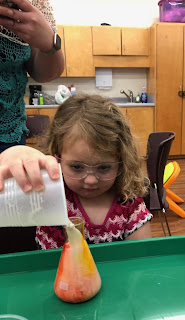 Maggie did it all herself.

And then- the magic happened! Foam came forth and erupted into a lovely puddle of airy...well, elephant toothpaste! That could be played with and drawn on with food coloring! 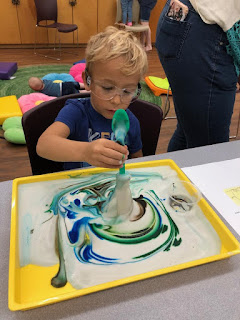 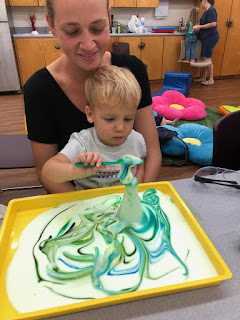 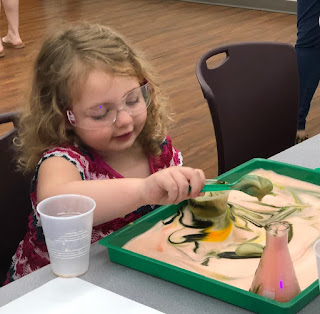 It was so, so cool.
All the kids were entertained for awhile and then they went on to play with toys but August and Levon did not want to stop. They were the last kids at the table.

We helped tidy up a little and the kids played with computers and more toys. Books were sort of neglected today but that was okay.

And then we all went to lunch at the block restaurant, of course. Story time makes us all ravenous.

So I was glad I went.

The field trip I was supposed to go on with Gibson tomorrow has been canceled due to the weather forecast which holds rain and possible big winds. Or something. I don't know. I'm sorry we won't be going but they'll reschedule and we'll go then.

Perhaps this weather has something to do with how I feel which is a mixture of physical unease and perhaps depression. Who knows? Not me. But what is there to do but ride it out, wait for changes, hope for better?
Just like with the election, I guess. Everyone's got an opinion about the latest primary results. Many women are disappointed that Warren is not getting her due and I'm one of them and dammit, it is upsetting that two white men pushing eighty are the front-runners but at least Bloomberg is out of the running and thank god for that. But as I told a friend today, Trump's election crushed my soul so badly that I don't dare have any preferences beyond NOT HIM.
I keep thinking about the expression "Yellow dog Democrat" and I suppose I am one now. I'd vote for a yellow dog against the pretender in office and defend my vote until the end of time.

Anyway, here's a sweet picture to end on. 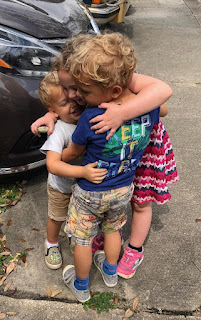