Soup And Sadness, A Bit Of Sickness

My husband's mother used to have a thing she said about how sickness can "come back on you" if you don't take care of yourself.

Today I felt as if my whatever-it-is had come back on me.

Not terribly so but I definitely wasn't feeling as fine and fancy as I did a few days ago. I slept until 9:30 which is ridiculous but I comforted myself with the fact that it was "really" only 8:30.
Hahaha.
And Lord, I'd had the weirdest dream. So weird and disturbing that I truly wished I hadn't slept so long. It was one of the dreams where there were so many people in my house. A party had arisen out of nowhere and I knew only a few of the people, and more and more kept showing up. People of all sorts and sizes and genders and ages and I kept going around yelling, "I don't know you! Get out! Get out of my house!"
Not only were people there, they were trashing up the place.
Some of the people did leave but I had to throw a few off the balcony into the water below.
Yes. I had a balcony with water below.
The dream ended when some guy went to throw ME off the balcony but he held on to me so we went down together and as we fell he said, "Turn over or you're going to crash into the rocks!" but I didn't and the water was only a few inches deep and somehow as we hit it, it was gentle and there was no harm.
I am sure that someone could tell me exactly what all of that meant and some of it is quite obvious but if you added in the parts of the dream that no, I am NOT GOING TO DISCUSS, it would be no easy task.

So I didn't do much today but as I went about not doing much, I listened to this: 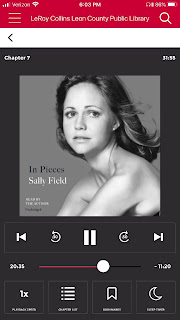 and who knew that Sally Field and I had the same stepfather?
The words, the narration, done by Field herself, described so closely what had gone on in my own family, even to the absent mother cooking Sunday breakfast while the molestation occurred.
The fear, the confusion, the dread, the desire to be loved even as she knew that the love she was being given was not the right kind of love, wanting to protect the mother, wanting to be the best little girl in the world which led to silence...all of it.

Strangely enough, this doesn't feel horribly triggering for me. I recognize it, I feel incredibly sad for Sally Field knowing exactly what she went through, feeling sorry for all of us who were the best little girls in the world, protecting our mothers, but it's a sadness I am quite familiar with.
I will certainly look at Ms. Field differently from now on. I think she was brave to write this book. I'm glad she did it for herself and for all of us who will recognize our own stories in hers.

Well. Samurai Soup. I will tell you how I make it. It was so good last night that I said to my husband, "We could eat this every night and I would be happy."

Fill up a largish pot halfway with water or chicken broth and bring to a simmer. If you use water, you can add chicken bouillon or vegetable bouillon or the delicious soup base I like called Better Than Bouillon. Don't use too much but enough to flavor.
Next add Tamari or soy sauce, whatever you have, even Bragg's amino acids. Enough to make the broth salty enough and a bit dark.
Give the broth a tsp. or so of toasted sesame oil. Mash some garlic cloves and add those.
Let simmer for a few minutes and bring to a boil.
Cut some greens up fairly small. You can use kale or chard or mustards or collards or bok choy. Whatever you have or want. I used a mixture of what I have in the garden. Add those. You can add more than you'll think you'll need because they cook down so much. Even spinach would be fine.
Slice a few mushrooms quite thin. Add those. Let everything simmer for a bit. Not long. You want your greens cooked but not slimy.
Next I throw in some small cubes of extra firm tofu to simmer for a few minutes. You could instead use a bit of chicken or even shrimp or leftover beef. Whatever you have. Or want. You could leave the protein out entirely because you're putting in an egg. But we like the tofu.
Now the tricky part- timing things.
I like to use some millet and brown rice ramen noodles that I get at Costco. Also, dumplings made of chicken and cilantro. Add the noodles first and let them get to the point where you can separate them, then the dumplings. However much or many of these as you want. It's tempting to add more than you need.
As soon as the soup is simmering again, stir gently and break as many eggs into the broth as you want servings. I make this as three meals. Two for us for that night and one for Mr. Moon to take to work the next day. So, three eggs. Cover the pot and gently simmer until the egg whites are done, the yolks as cooked as you want them. You are poaching the eggs.

Turn off the heat. Serve the soup with sliced scallions on top. Soy sauce on the side along with chili sauce and/or crushed red pepper.

That's it. Of course you can use more ingredients but the best thing about this is the simplicity.

Ask your questions in comments. I will answer them.