Kiss Of The Spider Man And The Raising Of Spirits

This morning I wrote the following:

Another day, another path to navigate, each one so similar, yet each one so different, the light perhaps less bright or falling from a different angle, giving a strange perspective when one thought that the view was fairly clear by this time.

Today everything is making me weepy. An e-mail from a friend. A video from Cozumel where the speaker says, "Yes, we are scared," but goes on to say that we must all love each other, remember the beauty. The ocean is behind him and two fish swim by, naked to the eye in the clear Caribbean waters completely unaware of anything except that suddenly their home, the sea, is empty of humans and their boats. This makes me cry too, for so many reasons. In the background I can hear the sweet melodious whistle of the black birds who live there and I tear up again.

I can't seem to move today. Oh, sure, I can move. But my mind is absolutely gone away somewhere and the simplest things have become so complex, requiring what seems to be Einsteinian thought processes and I just had to look up how to spell Einstein.

My husband keeps suggesting things we can do together that would take us off the property but safely isolated, and my reaction is always swift and horrified. I want to scream at him- don't take me away from my safety! My safety is not only this space, it is my routine, as small and meaningless as it is.
None of this is logical.
•••••••••••••••••••••••••••••••••

It's early evening now. My "regular" time to write. Another part of my ironclad routine.
The day has gotten better. Jessie and the boys dropped off jade plant starters at Lily's house and while there, the boys got to see Pepper and Jessie fell in love and now she wants a Pepper sibling. We'll see how that goes. Here's a picture of Sammy and Pepper that Lily sent this morning. 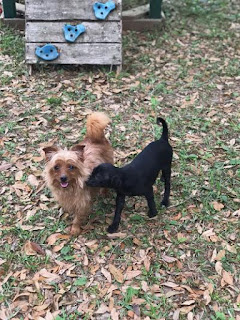 Dog friends. One old man. One little girl. I think they will be happy together.
Jessie also dropped off an N95 mask for Lily that Vergil had for dusty work. It won't protect anyone from her but it will protect her from others better than anything I could make and besides, it turns out that homemade masks are not acceptable for employees. Lily does report that Publix is giving everyone raises which will stay in place after this is all over and that every employee will get a $50 gift card for groceries each week for the duration.
Better than nothing. Much needed.
Jessie also picked up a bottle of alcohol that Jason had been able to score at his Publix and she brought that and a mask for us and a jade plant for me and a cutting of Swedish ivy.
Oh, my heart when I saw those baby boys! I wanted more than anything in this world to pick up Levon and hold him close to me, even though I know that's not exactly what Levon would probably want. I wanted to let August snuggle up to me while I read him a book and I wanted to hold Jessie in my arms, heart-to-heart.
Well.
Instead, Mr. Moon brought out the baby chicks for the boys to see. 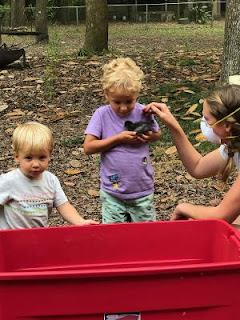 August wanted to hold them. Levon did not. He seems to know quite clearly that things are off and yet, of course, he's too young to even grasp the small amount of the big picture that his brother can.
There was some mulberry picking and garden admiring and Jessie got some collards and mustards to cook for their supper tonight. It started to rain a bit while they were here and so Jessie packed them up in the car to go home. Before August got buckled in, I got this series of pictures. 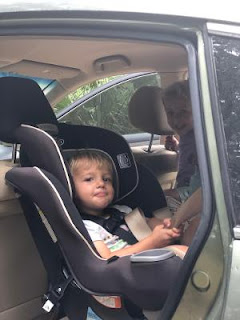 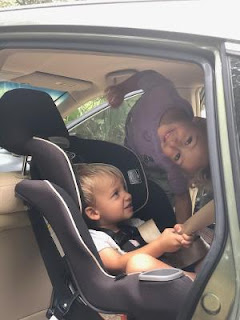 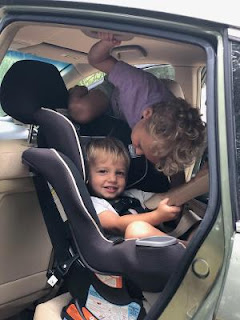 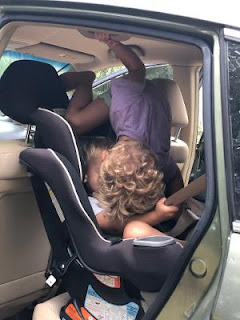 Oh, those boys.
"Good-bye, good-bye!" we called when they left. "We love you!"
"Good-bye," they answered out of the open windows.
And I cried a little more.

It began to rain a bit more seriously and although we did not get nearly as much as I would have liked, it made a beautiful hour or so for a nap.

I had one goal today which was to go through my cabinets and see what it is that I really have and don't have. Of course I never accomplished that. But I did get through the day without breaking down. I made sure that the chickens were all fed and tended and given water. I got to see Jessie and the boys. I got to rest in my husband's arms while the rain fell softly outside. I found a book to listen to which I think is going to be amazing. I'll let you know about that.

The rain was part of a "cold front" that's coming through. It's already cool enough that we've turned off the air conditioner and have opened the house. It's supposed to get down to 48 degrees tonight, 46 tomorrow. I may put the duck on the bed for one last bit of luxurious warmth before summer assaults us with its hot wet breath.

Lily just texted the group saying, "Can we talk about how hard it is to get Owen to do anything because he just wants to cuddle the puppy?"
With this picture. 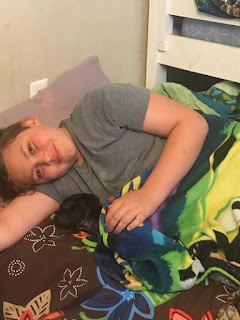 It's very hard to blame the boy and he's always been a gentle, loving soul who loves little ones.

Okay. That's quite enough of my rambling. Let me know how you're doing, from the tears to the fears to the beers to the quiet appreciation of the sweetness we may encounter as these strange days progress, as we continue down this unexpected path.