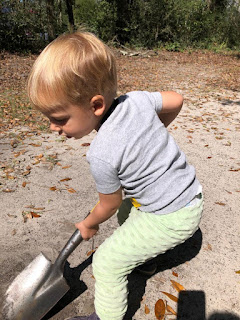 Jessie and Vergil brought the guys out this morning for a little visit and I was so glad to see them. I swear- August has gotten taller in the last week and Levon is now speaking in complete and complex sentences. Also, his digging abilities are reaching the professional level. His dad said, "Well, he practices about an hour a day." And he really does. Digging is his life at the moment. While Mr. Moon and Vergil and Jessie were talking about the garden and something in the garage, I led the boys to the driveway and Levon already had his shovel and I gave August a trowel.
"Let's hunt for treasure!" I said. And we did.
Because there have been people living here for over a hundred and sixty years and it's only been in the last fifty, maybe, that there's been a place to haul trash, a lot of the cracked plates and bottles and marbles and other detritus were tossed in one trash heap or another and you can't put a shovel down without finding something. Mostly glass and old pieces of crockery but sometimes I've found little bottles and other interesting things. So we got down on our knees except for Levon who shoveled from an upright position and we did indeed find treasure which I took into the house and let soak for awhile and then August and I put it all in a little sieve and let the water run over it until it was fairly clean and then I put all the little pieces we'd found into a box for him to take home.
I used to do this with Gibson and Owen. Another example of why this is such a good grandmother house.
August did get his most heartfelt wish and got to watch a little TV with his Boppa and Levon did too. Jessie made the boys a snack of banana boats with peanut butter to eat while they were watching The Mighty Baby Bheem and it was just a very sweet time. They left so that Levon could get his nap as they had plans to go see a water circus tonight. Not sure what a water circus is but I'm sure that it'll be a grand time.

I took it easy for the rest of the day. My ear is still stopped up, my head is still a bit achy on that side and I still don't have much energy. Mr. Moon, however, tilled the part of that garden that isn't planted and then got those potatoes in the ground. Bless him! I hope I feel good enough to get the onions and peas planted this week. I'm already direly late.

I think the camellias have hit their peak and are on the slow, downhill slide until next year. I'm keeping the vases in the hallway filled until I can't. 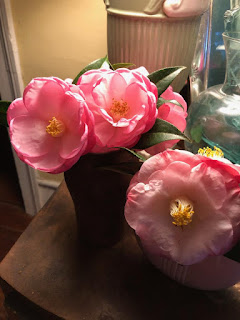 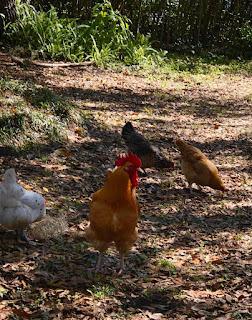 Liberace, a very fine rooster keeping watch over his flock. Roosters have to be incredibly attentive and aware of everything around them at all times. I really don't know how they find the time to eat between their eternal vigilance, watching for predators, and the way they keep track of where all the hens are.