A Sweet Distraction And Promise Of Life Continuing 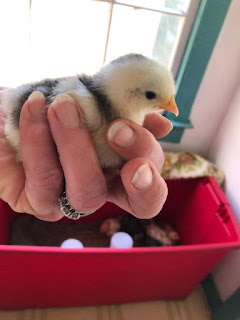 Well, there you go. Deal with the adorableness. I'll write about 'em in a minute here.

First. How are you? What has this day been like for you? Not necessarily what you've eaten or done or not done but how are you feeling? Where are you on the scale of emotions? Also, are you reading the news obsessively or are you letting it happen without your own personal minute-by-minute awareness of it?
This morning was hard for me. I thought I was going to need to pop an Ativan but I didn't. I did get more hives but I'm used to that. They're mostly gone at this moment. I talked to Lis and they're doing well. She's saving everything she can from Lon's garden, using, not wasting. It does really help to talk to someone else, doesn't it? To compare notes and know we're not alone in this. She lives on even more property than I do and there is plenty there to keep the both of them busy. She is of good cheer for the most part and by the time we got off the phone, I felt better.
Jessie started texting me about wanting to go get baby chicks. And you know, I've been dragging my heels about this, even though I have been wanting some.
"But we don't have this ready and we don't have that ready."
Still, I kept remembering when Kathleen brought me my first chicks. She just handed them over with a bag of shavings and a bag of chick starter food and before you knew it, I was raising chicks and Mr. Moon was building the Chick Mahal.
It worked out.
So Jessie went to two different places in Monticello and got nine chicks at a local feed place and nine more at the Tractor Supply. She said they probably would have given her all of them. They need to get rid of them.
The one she got at the local place are older. Probably two to three weeks. They have pin feathers and little tail feathers. 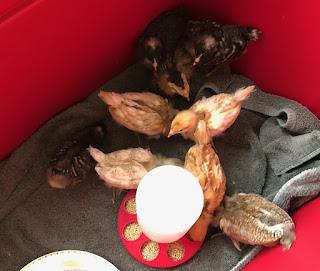 When she opened the box I said, "Hell, these chickens are ready to lay."
Not quite. But they're definitely not peeps. This is fine with me because they're going to move outside ASAP. Like maybe tomorrow. All baby chicks do is eat and poop their weight daily and they get stinky. And messy. I don't even use shavings anymore in the bottom of their little bin-homes because it's easier just to use towels that I can take out, shake out, and bleach.
The ones she got at the Tractor Supply are teeny tiny. 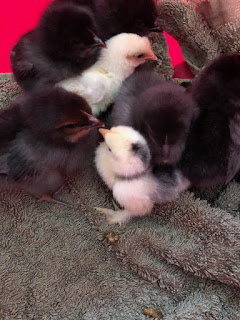 Especially the three banties. Those yellow ones are two of those.
I don't even know what all breeds they are. I suppose if you held a gun to my head I could tell you but luckily that is not the case. There are some Golden Comets, Barred Rocks, Easter Eggers, Americaunas, perhaps some Rhode Island reds. Not sure about that. And some others, I think.
We have them in two separate bins so that the big ones don't torture the little ones.
And so here we go. Jessie and Vergil are going to take some of them. And we'll keep the rest. Because I know how these things go, some will turn out to be roosters, some may die. And there's quite a bit of work and worry involved, keeping their spaces clean, keeping their feeders and waterers filled, making sure that their environment is warm enough and critter proof.
But it's not rocket science. I mean hey- chickens are the descendants of dinosaurs. They have great genes and are hardier than they look.
I already cut some greens up for them but they weren't sure what to do with them. Yet. They'll figure it out. When I went to pick some greens for our supper, I picked some of the chard that's getting bug eaten and I'll feed that to the chicks. It's nice to think that even buggy greens can be used, one way or another.

One of the things that Lis and I talked about was how strange it is to walk out into our yards and feel as if everything is absolutely normal. "Another beautiful day," as Lis said. And then to realize that nothing is normal.
Not really.
I know exactly what she means.

I kicked bamboo this morning. It's coming up like crazy. 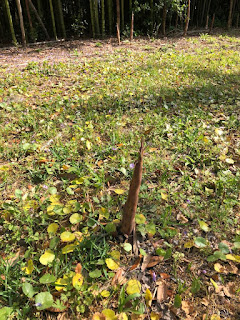 The wisteria is climbing way, way up into the trees, dropping purple petals which the wind catches hold of and spreads across the ground. 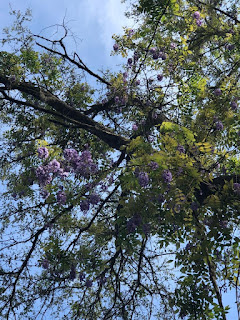 The wisteria that grows on the trellis has lots of bee attention. Can you see this one? 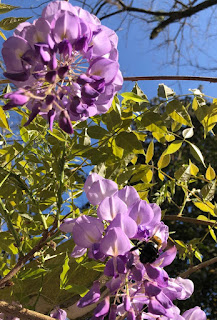 One strange thing that I've noticed is how fast the days seem to go. I'm not sure why but every time I look at the clock, it's later than I thought it could possibly be. It's certainly not because I'm deeply involved in anything. I flit from tiny project to tiny project. A little laundry here, a little weeding there. I'm spending way too much time doing crosswords. I really want to make a dress but all I've done is to wash the fabric. I haven't even ironed it. I suppose this is all just part of my denial/dissociation. I chastise myself for not using this time more wisely but honest to god, let's try not to do that, people.
Some folks deal with anxiety by being in constant motion and some deal with it by floating and flitting. I do have to get out and walk more. It's quite easy to keep a safe amount of space between humans while walking here. Mr. Moon is riding his bike and he is loving that. I'm proud of him.

I've been texting my kids and we all agree that not being able to see and hug each other is so hard but as May said, "I miss all of you! I think about how much I want to hug you all the time, and I'm just so grateful that anytime we've gotten together we have hugged, fiercely. I feel bad for people who don't and who haven't."
Yeah. That pretty much sums it up. It also sums up why I'm so damn lucky.
When Jessie was here we did not, of course, hug her. Did we keep six feet of space between us at all times?
Not really.
Also- can corona virus live on the down of baby chicks?
We're doing the best we can. I imagine that very soon, if our governor is wise, there's going to be a stay-at-home order. We all expect it.

Day by day. Or, minute by minute. However it is that you handle things. We all have our own styles of coping, our own tools in our toolboxes. Our own needs and definitely our own circumstances.
And yet- here we all are in the same boat, basically, from Australia to Hawaii to Great Britain to Mexico to China to Canada to Italy to Lloyd, Florida.
Doing the best we can.

Here's hoping you love the one you're with, be that man, woman, child, or pet.