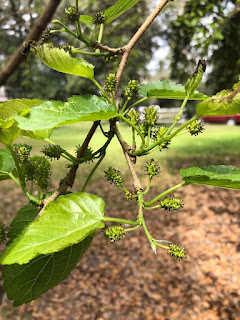 I think my new hobby is washing my sheets. It occurred to me recently that I am an adult and can choose to wash my sheets as many times a week as I want. I always think about Jacqueline Kennedy who, according to something I read most likely in People magazine, had her sheets changed every time she laid down on the bed- including naps.
This always seemed like the greatest luxury in the world to me and although I am the sheet washer and changer around here, it's not that hard to do. So anyway, this morning I decided to strip the bed and wash the sheets and pillowcases and take advantage of the nice breeze, which I did. When I went out to hang them on the line I noticed that the mulberry tree is filling up fast with hard, green, spiky little berries which will soon be full, juicy, sweet, purple berries.
Perhaps I'll even try to make mulberry jam this year. It would require a lot of lemon juice or vinegar to tart it up a bit but it might be worth the effort.
The mulberry tree always reminds me of Kathleen and I'm not sure why. I do remember talking to her about planting one and how the nursery insisted that I needed two for pollination to make fruit and we both agreed that that was bullshit and it turns out that it was bullshit. I doubt that my tree could bear the weight of any more berries than it already produces.

I dreamed about Kathleen last night. It's odd but when I dream about Sue and Lynn, two of my girlfriends who have died over the years, they have always come back to life even though I know they are dead and indeed, sometimes even tell them that although it seems a bit rude.
"Hey, whattayou doing here? You died!"
And it's always disconcerting and uncomfortable.
I'd never had a dream about Kathleen though, where she came back alive until the one last night and what strikes me now about that dream is that I was not upset that she'd come back from the dead but it seemed like something that if anyone could manage, it would be her. I was so, SO happy that she was back. It felt right. I felt a great relief as if her presence was something that I had been needing for a long time.
I can understand this. Kathleen showed up in my life about the time I first went entirely crazy with anxiety and she was a big part of me recovering from that. Sometimes she would just come over to my house and start telling me these stories that I would completely lose the thread of, couldn't keep the cast of characters straight in my head, but it would occur to me that it didn't really matter and that just the sound of her voice was soothing and her presence was something I needed, even if I didn't want to be around anyone. She would just talk and talk and then, eventually, she'd say, "Well, gotta go feed the kids," which were her dogs and her cat and her chickens and she'd go home. She almost forced me into going to her house to make soap and that was wonderful. She was the busiest, most involved-in-her-surroundings person I knew and she dragged me into just enough of it to keep me human without making me run back into my shell and shutting the trapdoor.
So yes. In my dream I suppose all of this came to me and I also suppose I must miss her more than I know. It was funny- she couldn't tell me how she came back to life and to earth and she told me that there were other things that she wasn't allowed to remember but she was taking care of business again and it was beautiful.
She was a joyful person.

I actually got the peas planted today. I had to force myself to put on my gardening overalls and get out there and kneel in the dirt and pull the weeds by the fence and poke little holes and put a sugar-snap pea in each hole and pat them down, three pats for each pea.
I should have planted the onions too but let's not go crazy.

I'm starting to wonder if I am merely malingering, stretching out this illness as a way to avoid going places, leaving Lloyd. I know my ear is still stopped up and that when I lay down I get a headache which is a definite sign that my sinuses are clogged but I'm not running a fever or anything like that. I'm going to go with Gibson on a field trip to the Gulf Specimens Marine Lab on Thursday come hell or high water. I need to spend some one-on-one time with that good boy and I do love that place. And I've texted Jessie and Lily to see if they want to go to Costco tomorrow.
I am trying.

Here's a picture of Maurice that I took last night. She was snuggled into my crochet stuff. 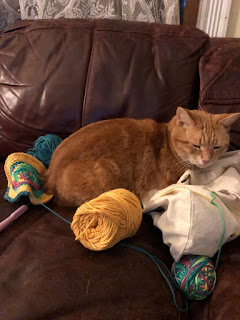 She's a sweet kitty when she isn't trying to kill us with her desperate love.

Sweet dreams to all of us tonight.