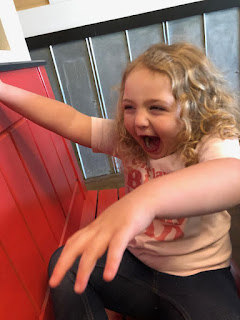 May and Michael will have been married four years on Thursday and are leaving tomorrow to go to St. Augustine for a sweet little get-away. St. Augustine is one of the most romantic places in the world. Lon wrote a song about that called "Meet Me in St. Augustine." It is a beautiful song, of course.
Anyway, May wanted to borrow a pair of my red shoes and I wanted to see their new apartment so I took the shoes into town today and checked out the new place.
Oh, how I love it! It's upstairs in an old brick four-plex with light everywhere and nice wooden floors and the quintessential Tallahassee apartment kitchen with a tile counter. May is making it her own, of course, with her treasures and books and Michael gets his very own room for all of his electrical...things? Not sure what all of those things are but they definitely have something to do with electricity.
As I told May, I would happily move into that apartment tomorrow. It's that sweet. And because it's upstairs, they are at bird-level and to make everything even better, it's within walking distance of a lot of places, including shopping, restaurants, a huge park where they have entertainment, and even best perhaps- Jessie and Vergil's house.

As I am writing this I am also listening to the live press conference with the members of the Coronavirus task force. It would seem to me that they didn't let Mr. I-Don't-Need-No-Education talk very long. This was wise. I was so reassured to hear that our economy is strong. Which is basically what he said. That and how brilliant he was to close the borders. Now other people who appear to truly have some medical training, with the exception of Mike I-Don't-Believe-In-Science Pence who probably couldn't apply a bandaid if he had to, are talking. Now there's a guy talking about the economy again. He says we are doing very well. Did he hear that they had to shut down the stock market this morning because it was crashing so fast?

This damn virus is truly raising the anxiety level in this country and I feel pretty sure that it was already red-lining. Or maybe that's just me. But hell- I went to Publix today and yes, the toilet paper aisle was half empty and ALMOST ALL OF THE BLEACH WAS GONE!
Y'all, I just want my whites to be white.
What in hell are people going to bleach in order to protect themselves from this virus? The beds in hotels? I think not. Your counter tops? Why? Has it spontaneously generated in your own home?
I just don't understand. And I am completely aware that I don't understand. What's just common sense and what's panic-induced behavior?
All I know was that I was embarrassed to buy toilet paper although it was on my list because we need it. Well, whatever. We have plenty now.
And I did actually buy extra cat food today because the thought of pissed off cats is not a pleasant one.
So that was my form of panic-buying.

Besides going to May and Michael's and Publix today I also went to lunch with Lily and Lauren and Maggie and Hank and Rachel. That's where I got the picture of Magnolia above. She was in a mood. She didn't like anything until I told her she could have my yuca fries. We were in a Venezuelan place. I didn't tell her the fries were yuca and she had ketchup to dip them in so that made her happy. At one point she had the metal stand you put your order number in so that the staff can find you and was waving it about like a magic wand.
"What do you want to be when you grow up, MerMer?" she asked me.
I pondered this because that's a very good question. Finally I said, "An anthropologist."
She thought a minute and then she said, "No, that's full. What else?"
"What do you think I should be when I grow up?" I asked her.
"Mmmm...a FAIRY!"
"Okay. A fairy."
She waved her magic number-holder stand and said a magical incantation and declared me a fairy.
"A bit odd that anthropology was all filled up but that there are still fairy opportunities," I said to the other adults at the table.
I won't tell you what Hank said because it was probably not PC but we all laughed. And since we are a group which represents quite a few of the LGBTQ initials, it's okay.
So now I'm a fairy and also a queen because a few moments later Magnolia waved her magic wand over me again and deemed it so and there you go.
Just call me Queen Mary Fairy. Or Queen Fairy Mary. Up to you.
Thank you very much.

The press conference is over. The most definitive thing I heard was that if you're old you definitely shouldn't go on a cruise. As I said yesterday that won't be a problem for me.

I'm going to go make some Samurai soup. It's a very, very simple soup and we call it that because of an episode we watched of Samurai Gourmet which you've probably never heard of but which was a little work of art. A jewel of simplicity and joy. It's one of those series that while you're watching it you're not sure why you're watching it but then later, even much later, you think about it and the memories that come back are almost visceral.